To say that Scully was beloved by fans is an understatement. 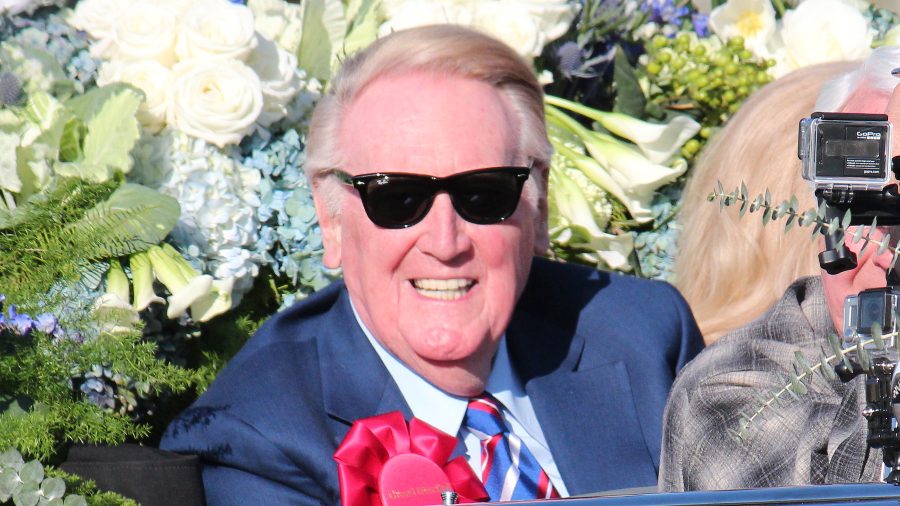 There are many legendary MLB announcers. Harry Caray. Bob Uecker (my personal favorite). Phil Rizzuto. And more. But many will tell you that Scully was the best of them all.

Love For the Game

Legend has it Scully’s love for the game stemmed from a 1936 visit to a Bronx laundromat, where an eight-year-old Scully watched Game 2 of the World Series. In that game, the New York Yankees, led by a young Joe DiMaggio, clobbered the New York Giants 18-4, prompting the youngster to feel sorrow for the defeated Giants (who would go on to lose the series in six games).

Though he never made it to the big leagues himself, Scully played two years in the outfield while attending Fordham University following a two-year stint in the U.S. Navy. While studying English at Fordham, Scully began a career in journalism and radio, serving as assistant sports editor his senior year.

Scully soon caught the eye of the great announcer Red Barber, who became his mentor and eventually helped him land a spot calling games for the Brooklyn Dodgers. When Barber departed the Dodgers for the Yankees following a contract dispute, Scully stepped into the principal role. He’d continue calling Dodgers games over the next six decades as well as other sporting events, including the famous 1982 NFC Championship game that put the San Francisco 49ers in the Super Bowl. On Oct. 2, 2016, he called his final professional game, when the Dodgers visited the San Francisco Giants.

To say that Scully was beloved by fans is an understatement, and this was evident in the outpouring of affection at Oracle Park following news of his death.

“He’s been a part of my life since I was born,” said one of the fans who turned out with his 90-year-old grandfather to pay tribute to Scully.

“I was almost in tears,” 75-year-old Daniel Mirgil of Pomona told the Associated Press. “We used to use our transistor radio just to listen to him.”

Vin Was the Real Deal

Unlike Mirgil, I’m not a Dodgers fan. Yet I found myself similarly moved by Scully’s death. It’s not just that he was great at calling games, an artist in fact. Vin was the real deal. Though his career was a success by any measure, he also overcame much. He lost his father at age 4 and later a sister to brain cancer. His first wife died in a tragic accident in 1972, and his eldest son died in a helicopter crash at age 33.

Despite these trials, Scully continued to bring professionalism, joy, and his love of the game to listeners (he credits his faith for never wavering). And he wasn’t afraid to remind us that the world, though far from perfect, is what we make it — for better or ill.

While Hugo Chavez was nationalizing industries to build his people’s utopia, many in the U.S. media were lauding Venezuela as an “economic miracle.” Scully knew better.

“Socialism is failing to work as it always does, this time in Venezuela,” Scully observed during one broadcast. “You talk about giving everybody something free and all of a sudden there’s no food to eat. And who do you think is the richest person in Venezuela? The daughter of Hugo Chavez.”

Scully was wise enough to realize the first rule of economics — nothing is free in a world of scarcity. History has shown again and again that socialism is a seductive philosophy — but one that fails every time it is implemented, often with tragic consequences.

Vin Scully’s contempt for collectivism isn’t why I loved him. But I’d be lying if I didn’t admit it made me love him just a little more.