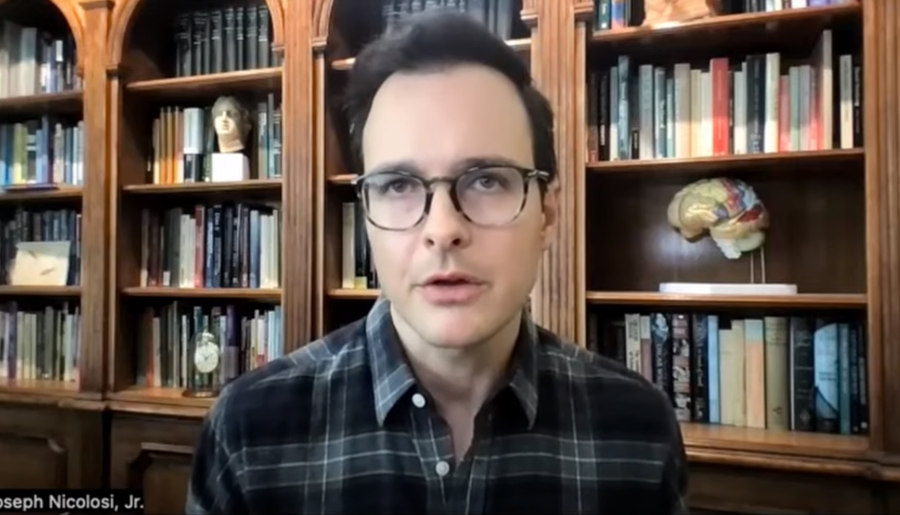 If someone identifies as LGBTQ+, he’s affirmed, but if he wants to explore heterosexuality, people want to deny him the option. That’s hypocrisy, Nicolosi says. Helping men through their childhood trauma was called hate speech by the Southern Poverty Law Center, and indeed his YouTube channel was banned as “severe hate speech.”

“How are these selective bans shifting public opinion, not only on this issue but perhaps on other issues as well?” Nicolosi asks. “What other scientific information is being withheld from the public? That should alarm all of us.”

“[Reintegrative Therapy’s] focus is treating traumatic memories, and sexuality change is often a biproduct, as the new peer-reviewed evidence is showing.”

“The science is pretty clear. The media just isn’t telling us about it,” says Nicolosi. “Everybody should be free to find therapy and support to help them meet their own desired options. Not the government’s options. The client should be in the driver’s seat of the therapy. Not politicians or lobbyists or far-left activists. They need to stay out of the therapy room and let clients pick their own therapy goals.”

Learn more from Dr. Nicolosi, including examples from his therapy practice, by watching here.

Twitter called use of the expression “hateful conduct,” which it claims stigmatizes when used in the context of gender identity.

Morse responded: “Grooming or groomer is as often applied to heterosexual as homosexual conduct. ‘Grooming’ means the manipulation of children to make them susceptible to sexual exploitation by adults. In the context of gender identity, the term ‘groomer’ can mean adults manipulating children to become confused about their sexual or gender identity.”

Morse emphasized that the “optics” of suppressing speech are terrible and create a presumption of indefensible conduct.

“Sending the Twitter bots out to mechanically squash speech for the use of a single word is not the behavior of an innocent lamb. People who are talking to other people’s children about sexual topics, including sexual identity, should be prepared to defend the content of their speech.”

“People are calling you ‘groomers’ for a reason. They are telling you your conversations with small children are not harmless, are potentially confusing to the child, and drive a wedge between the child and his or her parents. If you disagree, defend your speech. Don’t suppress the speech of others.”

Morse observed that the sexual exploitation of children is a growing tragedy. “One of the most notorious examples is Ghislaine Maxwell, who was sentenced to 20 years in prison in June for recruiting minors to be sexually abused by Jeffrey Epstein and his friends.”

“The term ‘grooming’ was used repeatedly in the testimony of victims and in coverage of the trial. Was this ‘hateful?’” Morse asked.

The Ruth Institute had its own recent run-in with tech censorship.

In late July, YouTube removed three episodes of the Dr. J Show, the Institute’s weekly interview series, saying it does not allow content which “contradicts expert consensus from local health authorities or the [adamantly pro-abortion] World Health Organization and poses a serious risk of harm or death.’” (Portion in brackets added.)

The censored episodes were interviews with doctors explaining the scientific and medical data proving the increased risk of breast cancer following abortion. “Deleting access to these potentially life-saving episodes is what ‘poses a serious risk of harm or death,’” Morse said. “But for the Big Tech censors, anything anti-abortion must also be silenced.”

The censored episodes can be found on these alternate sites: Rumble, BitChute and Odysee.