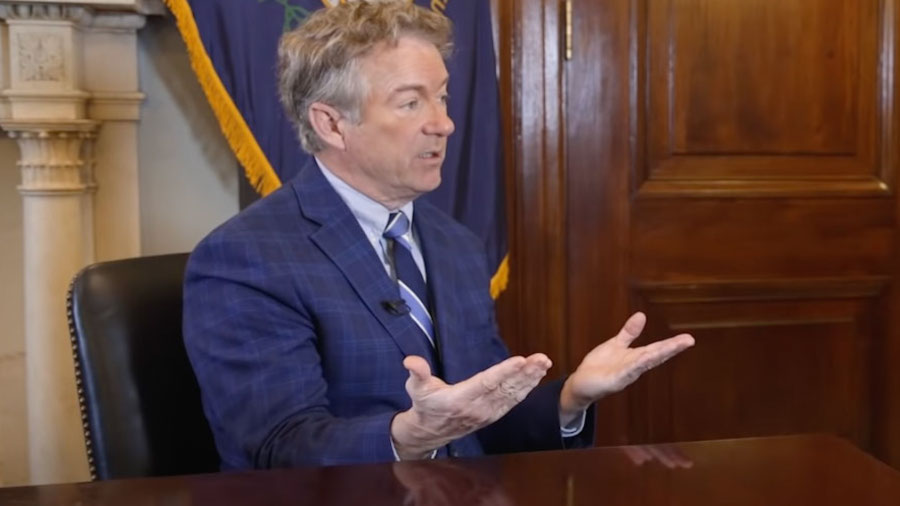 "Civil disobedience is a time-honored tradition in our country," Sen. Rand Paul tells The Daily Signal, "from slavery to civil rights, you name it."

Sen. Rand Paul of Kentucky is “all for” trucker convoys coming to the United States.

The Republican senator discussed the Canadian “Freedom Convoy” during a Thursday interview with The Daily Signal following an NBC News report that a similar trucker convoy may form for this weekend’s Super Bowl in Los Angeles — and potentially come to Washington, D.C., for the State of the Union address in early March.

“I’m all for it,” Paul said. “Civil disobedience is a time-honored tradition in our country, from slavery to civil rights, you name it. Peaceful protest, clog things up, make people think about the mandates.”

“And some of this, we started,” he added. “We put [COVID-19] mandates on truckers coming across the border from Canada so then they put mandates on, and the truckers are annoyed. They’re riding in a cab by themselves, most of them for eight, 10-hour long hauls, and they just want to do what they want to do. It’s their own business.”

That’s the way health care used to be, Paul said, noting that health care decisions used to be “your own business” between an individual and his doctor.

“I hope the truckers do come to America,” he said, asked how he thinks Washington would handle such a convoy.

“It’d be great, but the thing is, it wouldn’t shut the city down because the government workers haven’t come to work in two years anyway,” Paul added. “I don’t know if it’ll affect D.C. It’d be a nice change. We’d actually have some traffic.”

Paul criticized House Speaker Nancy Pelosi for closing down the United States Capitol for “God knows what reason,” pointing out that both in-person office work and tourism have dwindled in the nation’s capital.

“I hope they clog up cities,” the Kentucky Republican said of the truckers. “And we’re seeing a break in the dam now. Several Democratic governors are finally sort of relinquishing.”

“What they’re finding is, moms and dads are upset about this,” the senator added. “They’re not just Republican. Everybody’s upset about this. They’re annoyed that their little kids have to be in a mask.”

But the realities of masking and other pandemic restrictions are beginning to break through, Paul said:

Even CNN, you got the Dr. Fauci acolyte, that woman’s like, ‘Oh, facial masks are now just simply decorations.’ She’s admitting the truth. That’s what they’ve been the whole time, but she’s finally admitting it. So even people who only watch CNN are finally getting the understanding that the masks don’t work and they’re starting to push back too.