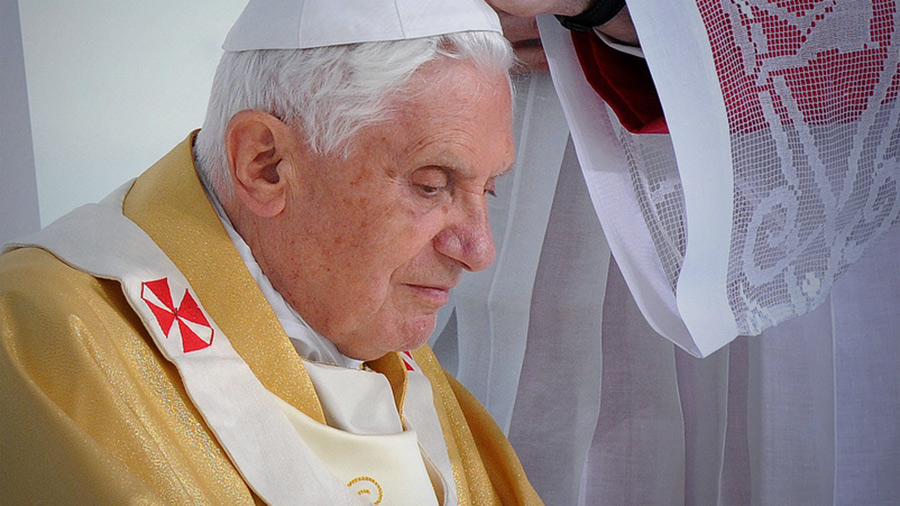 The secretary to retired Pope Benedict said Tuesday that Benedict did not co-author and only contributed to a book on priestly celibacy.

U.S. publisher Ignatius Press and Catholic Cardinal Robert Sarah announced Sunday that the 92-year-old pope emeritus, who resigned from his position as head of the Catholic Church in 2013, was publishing a book, “From the Depths of Our Hearts,” with Sarah. But Archbishop Georg Gänswein, who is the prefect of the papal household and personal secretary of the pope emeritus, said in a statement Tuesday that Benedict is not a co-author of the book.

Ignatius called the book “unprecedented” and said in a press release it takes a “serious and unflinching look at the crisis in the Catholic Church” that will “honestly address the spiritual challenges faced by priests today, including struggles of celibacy.” “From the Depths of Our Hearts” is set for release in France Wednesday and Feb. 20 in the U.S.

The book carries significance within the Catholic Church as this would be the first time in the past two millennia a retired pope has weighed in on a matter his predecessor is considering: the issue of priestly celibacy. The book comes as bishops within the Catholic Church push Pope Francis to consider allowing priests to marry. An October 2019 synod of bishops in South America ended with the bishops voting that Francis should allow married men to be ordained to the priesthood in Brazil in the Amazon region. Francis is expected to publish his own thoughts on the proposal in upcoming months.

Gänswein said Tuesday that “at the indication of” Benedict, Gänswein asked Ignatius to remove the former pope’s name as co-author from the book, as well as remove Benedict’s name from the introduction and conclusion. Gänswein added that Benedict knew Sarah was writing a book and that Benedict had sent “a short text of his on the priesthood” that Sarah could use “as he wished.”

The pope emeritus “had not approved any project for a co- signed book, nor had he seen and authorized the cover,” Gänswein said in a statement, according to Vatican News, adding that it was a “misunderstanding without questioning the good faith of Cardinal Sarah.”

“Ignatius Press published the text as we received it from the French publisher Fayard,” Brumley said, adding:

Brumley added that Ignatius Press considers the book a “coauthored publication,” taking into account the usual definitions and the circumstances of the book. Sarah tweeted photos of his correspondence with Benedict regarding the publication of the book and said he sent Benedict a complete copy of the book on Nov. 19, including the cover, the introduction, the conclusion, and both Benedict’s and Sarah’s individual texts. Sarah also said that Benedict sent a message to him Nov. 25 that approved the publication of the manuscript in the form Sarah had sent.

This contradicts Gänswein’s statement that the retired pope “had not approved any project for a co-signed book, nor had he seen and authorized the cover.”

Attacks seem to imply a lie on my part. These defamations are of exceptional gravity. I give this evening the first proofs of my close collaboration with Benedict XVI to write this text in favor of celibacy. I will speak tomorrow if necessary.+RS pic.twitter.com/EjD9K0Uc0D

Brumley also pointed out that it is not incorrect to say Benedict and Sarah co-authored the book, given the definition of a joint work.

“Given that, according to Benedict XVI’s correspondence and Cardinal Sarah’s statement, the two men collaborated on this book for several months, that none of the essays have appeared elsewhere, and that a joint work as defined by the Chicago Manual of Style is ‘a work prepared by two or more authors with the intention that their contribution be merged into inseparable or interdependent parts of a unitary whole,’ Ignatius Press considers this a coauthored publication,” Brumley said.

The Vatican did not respond to the Daily Caller News Foundation’s request for comment.