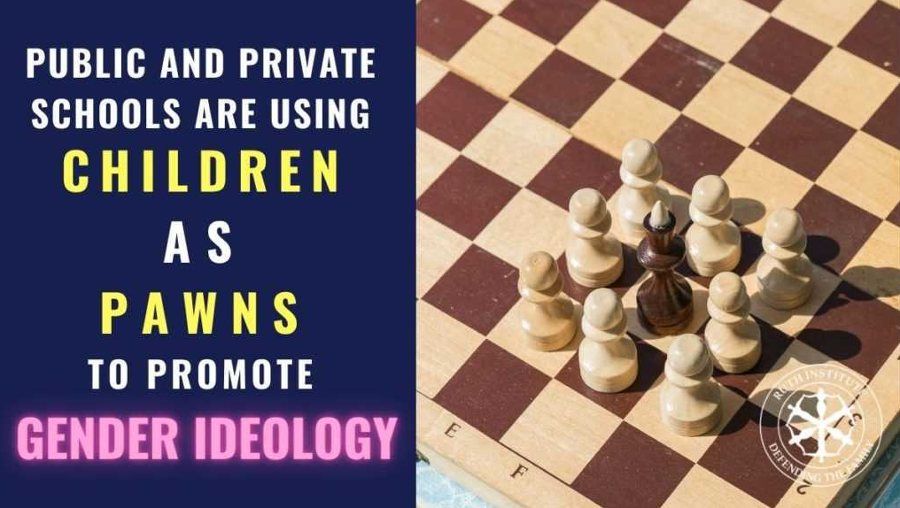 Morse noted a recent lawsuit against the Ludlow, Massachusetts, school district for transitioning children without their parents’ knowledge, and an exposé on private schools promoting “gender transitioning” to children as young as pre-school.

“While families were sleeping, the transgender ideology has taken over our schools,” Morse said. “Every effort is made to keep parents in the dark. The whistleblower teacher who informed a parent about what was going on, was later fired.”

Parents are suing the Ludlow, MA, school committee on the grounds that the “defendants’ protocol and practice of concealing from parents information related to their children’s ‘gender identity’ and efforts to affirm a discordant gender identity at school” violate the fundamental rights of both parents and children.

According to material obtained by Breitbart News and reported on by others, including this from LifeSiteNews: private schools across the country are using “visual aids including the gender fluidity-promoting Gender Unicorn and Gingerbread Person and posters explaining flags for no less than seven different ‘alternative’ sexual designations, as well as Maia Kobabe’s notorious book, Gender Queer, which features explicit illustrations of sex acts.”

“In this material, starting with pre-school, children are asked to think about whether they ‘feel’ like a boy or girl, and whether their feelings match up with their body parts,” Morse said. “In higher grades, it gets worse. Parental concerns are dismissed as ‘Puritan talk.’”

“What’s going on in our schools can only be described as brainwashing. This needs to be exposed and opposed now.”

“Transgenderism” will be a major focus of the Ruth Institute’s 2022 Summit for Survivors of the Sexual Revolution, June 24-25 in Lake Charles, LA, including a session with Maria Keffler and Erin Brewer of Advocates Protecting Children, who work to defend society from the transgender ideology, and detransitioner Walter Heyer, who lived as a woman for eight years and now helps others transition back.

Lauren Muzyka is the founder, president, and CEO of Sidewalk Advocates for Life, the nation’s largest sidewalk outreach training program. Lauren is a licensed attorney with more than 20 years of experience in sidewalk outreach. Lauren participated in the first 40 Days for Life campaign and went on to serve as their campaign strategist, advising 300+ campaigns. Inspired by the transformative power of prayer and peaceful outreach on the sidewalk, Lauren founded Sidewalk Advocates for Life in 2014.

Sidewalk advocates help women see that they can have the life that they want and still keep their child. “We have to be someone we would want to talk to if we were in crisis. … The baby is shining a light into an area of someone’s life who needs help … there’s something deeper going on.”

Muzyka talks about women going in for their second, third, fourth abortion because they’re locked into the mindset of this being their only solution. She tells them, “The way that you start healing is to make a different decision today.”

Learn how you can get involved saving lives by watching this episode of the Dr. J Show.

“Destroying traditional Christian sexual ethics has always been the goal of the Sexual Revolution. And defending these ethics is the answer to all the problems the Sexual Revolution has caused,” said Dr. Jennifer Roback Morse, Founder and President of the Ruth Institute.

“Whether the issue is abortion, transgenderism, divorce, homosexuality, pornography or child abuse, restoring traditional Christian sexual ethics is the solution.”

Morse will present a “Defense of Traditional Christian Sexual Ethics in 15 Minutes” at the Institute’s 5th Annual Summit for Survivors of the Sexual Revolution, June 24-25, in Lake Charles, LA.

This talk will equip listeners to explain and defend their values. Summit participants will receive a flash drive containing the power point slides, script, and other supporting materials from Morse’s presentation.

“The Sexual Revolutionaries wage non-stop psychological warfare on Christian values and the people who hold them. This year’s Summit will offer a sure-fire defense against the continual barrage of propaganda for the latest ‘progressive’ assault on civilization.”

This session is modeled after a presentation and slide show developed by the late pro-life pioneer, Dr. John Willke. Willke’s work helped countless people defend the right-to-life in a brief and concise fashion. One of his former coworkers, Apostle Arnold Culbreath, will also speak at the Summit.

“Too often, people of faith are afraid to defend their core values,” Morse said. “Our 15-minute Defense of Traditional Christian Sexual Ethics will empower people to speak their minds from their hearts.”

What Happened to The Hippocratic Oath?

Dr. Donna Harrison is an OB/Gyn and Executive Director of the American Association of Pro-Life Obstetricians and Gynecologists, the largest pro-life physician organization in the world, with over 4,000 members across the United States, and associate members on every continent.

In this video from the 2021 Summit for Survivors of the Sexual Revolution, Dr. Harrison explains the two basic worldviews surrounding ethics. One is the hedonistic/utilitarian view that says happiness/pleasure is the substance of well-being. The other is the virtue ethic, which says that doing the right thing according to virtue and reason creates happiness.

Which view you take determines where you stand on the issue of a doctor’s role, Harrison says. The Hippocratic Oath follows the virtue ethic. It assumes that certain actions are wrong and that a doctor has a duty to act rightly toward patients, which leads to their health.

Now we have state-controlled medical systems where those who do not contribute to the net happiness of society, (i.e. the handicapped, elderly, unwanted, and defenseless) are subject to elimination as part of “health.”

Healthy Relationships After Abuse Part 3: Pursuing Someone with a Traumatic Past

On the “Ask a Survivor” blog, clergy sex abuse survivor and author, Faith Hakesley, shares her advice for those struggling to form life-long relationships despite past abuse and trauma.

This is part three of my four-part blog series on relationships after sexual abuse. So far, I have addressed revictimization and forming healthy relationships after abuse. This post will be aimed at helping anyone who is attempting to pursue a relationship (with the potential for marriage) with someone who has a traumatic past.

Learning that the person with whom you are considering marriage has suffered past abuse can be overwhelming and scary to hear. A million thoughts might flood your mind. You might feel anxious and uncomfortable and be unsure of what to say. The truth is, there is no “perfect thing” to say in a situation like this.

The reality is that you’re not going to solve anything just by talking. Just being there and listening without any blame is sometimes enough. There is nothing you can do to “fix” things. There is nothing you “could have done” to protect your significant other. However, if you are looking for some basic, supportive things to say in response, here are some suggestions:

“I’m sorry that happened to you.”

“I’m here for you no matter what.”

“Thank you for telling me.”

“The news is great. The leak is appalling,” Ruth Institute President Dr. Jennifer Roback Morse, Ph.D., said of the leaked draft of a Supreme Court decision overturning Roe v. Wade. “But even though Chief Justice John Roberts confirmed the document’s authenticity, it’s only a draft and could be changed many times before the actual decision is handed down.”

However, “if the court indeed overturns Roe v. Wade, it will be on the right side of history for a change. Unlimited abortion has been one of the linchpins of the Sexual Revolution — a revolution that has been every bit as deadly as the Russian or French Revolutions, and not just to preborn children.”

“Unfettered access to abortion facilitates the fiction that everyone can have sex as often as they like without consequences. We now know this is lethal nonsense. For decades, children have suffered the loss of or separation from their parents, who had sex without being prepared to be parents.”

“The broken hearts, the suicides, the premature deaths from anxiety, stress and loneliness, are all inevitable products of the Sexual Revolution,” Morse explained.

“Pro-life and pro-family forces are ready for what lies ahead. Our friends at Students for Life of America have been preparing what they call the ‘Pro-life Generation’ for this moment. Our colleagues at Heartbeat International have built an extensive network of pregnancy care centers to support mothers in need,” Morse noted.

“And The Ruth Institute has been helping people understand that traditional Christian sexual ethics is far more humane, reasonable and fair than the dogma of the Sexual Revolution. We look forward with joy to the next step of building a Civilization of Love.”

“Overturning Roe v. Wade is not the end of our abortion nightmare. But it is the beginning of bringing America back to life and of moving us forward to what we should have been all along,” Morse said.

Students for Life of America President Kristan Hawkins will be the keynote speaker at the Friday night banquet of the Ruth Institute’s Summit for Survivors of the Sexual Revolution June 24-25 in Lake Charles, LA.

“We are fortunate to have Mrs. Hawkins as a speaker during this crucial time in our nation’s history,” Morse said.