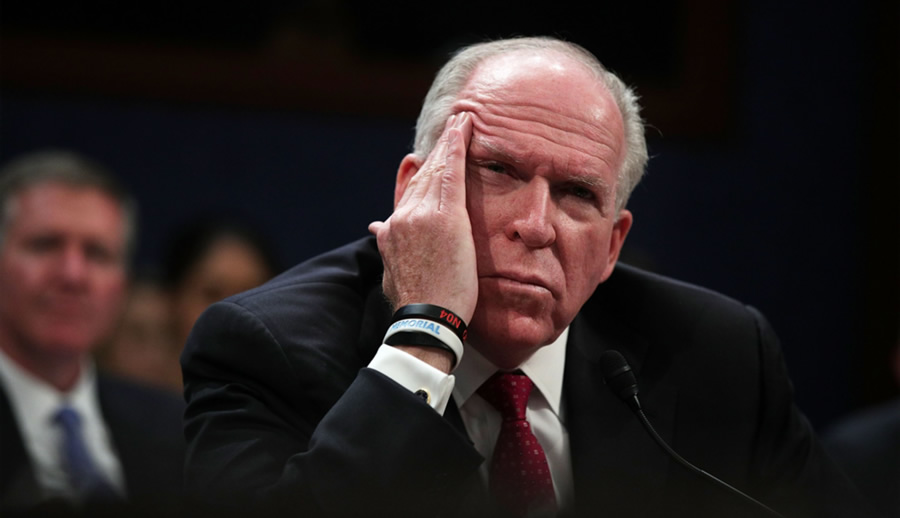 John Durham, the U.S. attorney investigating the origins of the Trump-Russia probe, told former CIA director John Brennan on Friday that he is not a target of the investigation, according to an adviser for the former spy chief.

Nick Shapiro, the Brennan adviser, said that Durham asked Brennan questions on a “wide range of intelligence-related activities,” including CIA actions before the 2016 election and the agency’s role in crafting an Intelligence Community Assessment (ICA) that said that the Russian government interfered in the election in order to help Donald Trump win the presidency.

The interview took place at CIA headquarters and lasted eight hours, according to Shapiro.

“Brennan was informed by Mr. Durham that he is not a subject or a target of a criminal investigation and that he is only a witness to events that are under review,” Shapiro said in a statement on Twitter.

🚨🚨🚨 A thread on @JohnBrennan's Durham Interview:

Earlier today Brennan was interviewed by US Attorney John Durham on issues related to Russia's interference in the 2016 U.S. presidential election. 1/8

According to Shapiro, Brennan asked Durham, the U.S. attorney for Connecticut, why the ICA was being scrutinized even after the special counsel’s office and the Senate Intelligence Committee affirmed its findings.

“Brennan also told Durham that the repeated efforts of Donald Trump & William Barr to politicize Mr. Durham’s work have been appalling & have tarnished the independence & integrity of the Department of Justice, making it difficult for DoJ professionals to carry out their job,” Shapiro said.

Durham is conducting a sprawling investigation into several aspects of the intelligence activities carried out against Trump associates before the 2016 election and during the presidential transition period.

Former FBI lawyer Kevin Clinesmith pleaded guilty in the Durham probe on Wednesday to making false statements by altering an email from a CIA analyst in June 2017 to say that Carter Page, a former Trump aide, was “not a source” for the spy agency. Page was what’s called an operational contact for the CIA through 2013.

While it is unclear what aspects of the ICA Durham is investigating, questions have been raised about how information from the Steele dossier ended up in the document, which the Obama White House released on Jan. 6, 2017.

FBI officials, including James Comey and Andrew McCabe, lobbied aggressively to include information from the dossier in the ICA. Officials and analysts at the CIA did not want to use the information because they found it unreliable. One CIA analyst said that the agency considered the dossier to be “Internet rumor,” according to a Justice Department inspector general’s report.

One CIA analyst told the Senate Intelligence Committee that a “bitter dispute” ensued between the agency and FBI over the dossier information. The FBI eventually got its way, and a two-page summary of the dossier was included as an appendix in the ICA.

FBI officials knew at the time of the debate that were concerns about the credibility of the dossier and its author, Christopher Steele.

According to the Justice Department IG report, Bill Priestap, the FBI’s chief of counterintelligence through 2018, had been told by his British counterparts that Steele sometimes showed questionable judgement.

But Priestap withheld that assessment from some of his FBI colleagues and CIA analysts working on the ICA, according to the IG report. Priestap instead told the CIA that Steele was “reliable.”

Barr has provided few details about Durham’s investigation, though he has said that the findings so far are “troubling.” He said in an interview on Aug. 13 that there will likely be “significant” developments in the Durham probe before the election.