Why the Pro-Life Fiorina’s Ascent Should Terrify Democrats 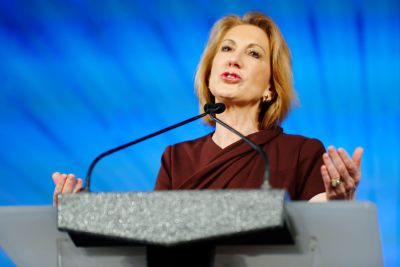 By The Washington Post/Marc Thiessen Published on September 22, 2015 •

In the wake of her stellar performance at the CNN debate, Carly Fiorina has shot to second place in the polls, and her ascent raises a possibility that should terrify Democrats: The GOP might just nominate a passionate, articulate pro-life woman as its standard-bearer in 2016.

If that happens, Democrats can say goodbye to their beloved “war on women” rhetoric.

Consider: Hillary Clinton recently compared pro-life Republican presidential candidates to terrorists. “I take it a little personal when they go after women,” Clinton smirked. “Extreme views about women, we expect that from some of the terrorist groups — But it’s a little hard to take coming from Republicans who want to be president of the United States.”

That line won’t work so well if the Republican running for president of the United States is a woman.

Neither will Clinton’s oft-repeated complaint that Republicans trying to defund Planned Parenthood want to eliminate access to breast cancer screening. “I would like these Republican candidates to look the mom in the eye who caught her breast cancer early because she was able to get a screening for cancer,” Clinton said.

Fiorina does not have to look that mom in the eye — because she is that mom. “I’m a breast cancer survivor,” she told Chris Wallace on “Fox News Sunday” this weekend. “Of course we should be funding those things. But I find it fascinating that Democrats will never support taxpayer funding, for example, for a women’s health center right next door to a Planned Parenthood [clinic] that would provide all those same services and also provide women an alternative to abortion.”

Read the article “Why the Pro-Life Fiorina’s Ascent Should Terrify Democrats” on washingtonpost.com.

Pro-Abortion Pennsylvania Rep. Brian Sims Is a Thug. Is He Also a Racist?