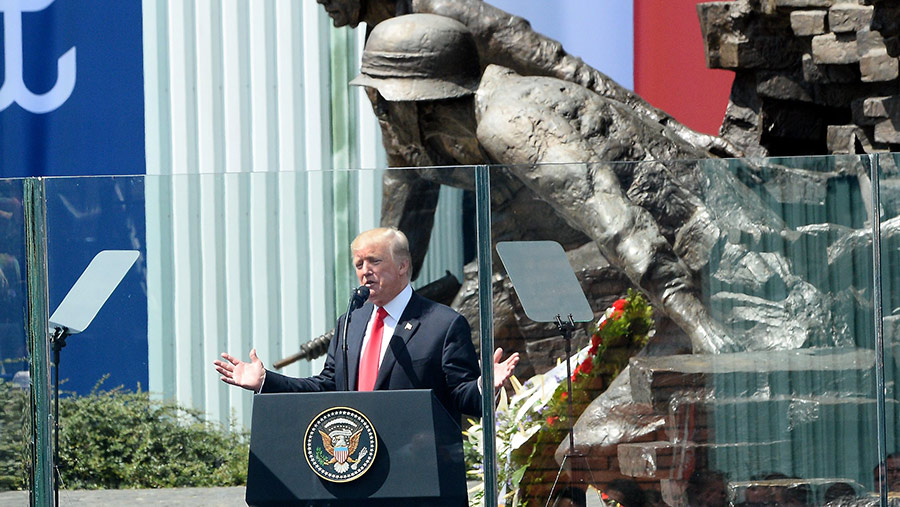 In 1987 when he was contemplating a run for president, Vice President George H.W. Bush was criticized for his inability to articulate an agenda for the country. A friend suggested he spend a weekend alone at Camp David to figure out where he would take the nation.

“Oh, the vision thing,” Bush replied disparagingly. Though he won the 1988 election, the quote would haunt him.

In Poland last week, President Trump declared his vision for America that in content and tone rivaled Ronald Reagan’s promise to defeat communism.

In a speech to thousands of enthusiastic listeners, who chanted his name and “USA,” Trump laid out in unambiguous tones his view that the West is engaged in a clash of civilizations with “radical Islamic terrorism” that seeks to destroy us and replace our values with theirs.

Playing off the history of Nazi and Soviet occupation of Poland (and the Holocaust), the president said, “We are confronted by another oppressive ideology — one that seeks to export terrorism and extremism all around the globe. … We’re going to get it to stop.”

It is a worthy goal, but how do you stop an ideology based on religious zeal and with no fixed address, as was the case with Berlin during WWII and Moscow during the Cold War? It doesn’t help in this latest war that so many European countries, especially Germany, have taken in hordes of “refugees” from nations that export terrorism and have failed to assimilate them, much less convert them to “Western values.”

The president spoke of another threat, which he labeled “the steady creep of government bureaucracy that drains the vitality and wealth of the people.” He added, “The West became great not because of paperwork and regulations but because people were allowed to chase and pursue their destinies.”

Right again. Proving his point that hated bureaucracy in Washington can’t come up with a fix to Obamacare, or reform the tax code, despite Republican majorities in both houses of Congress.

The Value of Human Life

Not to be too picky, but when the president said, “And above all, we value the dignity of every human life, protect the rights of every person, and share the hope of every soul to live in freedom,” I question those sentiments. That last part channeled George W. Bush, who said much the same thing, except there are conflicting definitions of “freedom.” The Islamic world’s view of freedom is in stark contrast to that of the West, especially when it comes to the rights of women and tolerance for other faiths. As for valuing every human life, the number of abortions in America since 1973 (nearly 60 million and counting) and the assisted suicide laws passed in a number of states and the District of Columbia, mitigate that argument.

Defending Our Values at Any Cost

President Trump then got to his main point: “The fundamental question of our time is whether the West has the will to survive. Do we have the confidence in our values to defend them at any cost? Do we have enough respect for our citizens to protect our borders? Do we have the desire and the courage to preserve our civilization in the face of those who would subvert and destroy it?”

Good questions all. They will have to be answered by millennials and generations to follow.

Democracy is not the natural state of the world; otherwise all would be free. Dictatorships, religious fanatics seeking to impose a byzantine religion on others and economic systems that doom their people to poverty while enriching those at the top seem to be the norm.

Ronald Reagan, who the president mentioned to great applause, used to say freedom is “never more than one generation away from extinction.” President Trump reminded the West of that. With the mentioned caveats, it was a timely and necessary address.