President states that he now considers himself a non-denominational Christian. 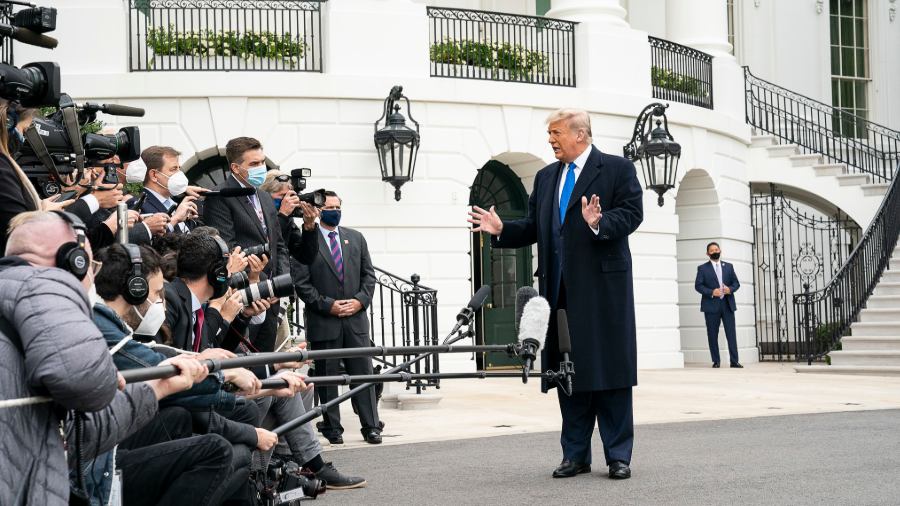 The following Q&A was part of a written interview with President Trump for Religion News Service. His answers appear in full below.

1. Last week you gave reference to thanking God that you had COVID. What did you learn spiritually during your COVID experience?

It was amazing to see so many great Americans who reached out and said they were praying for me and my family. This country is full of wonderful people with strong faith in God. Melania and I felt the prayers of Americans from all across the country — and even around the world. When I was at Walter Reed, I said, “There were miracles coming down from heaven.” I meant it — Melania and I are very thankful to God for looking out for our family and returning us to good health.

2. You are regularly associated with influential evangelical leaders (i.e. Paula White, Jack Graham, Franklin Graham). What have you learned from them spiritually?

I am honored to work with many Americans of faith, including our great Vice President Mike Pence, Faith Advisor Paula White, and so many others. These people truly love our country and love God. I hear and listen to them. Earlier this month, Franklin Graham and some other great faith leaders came to the Oval Office to pray for me and our country as they often do. These amazing people love the U.S.A. and have a genuine desire to work together for the betterment of all Americans. These leaders are passionate about America’s traditional values and want our churches to be open. I appreciate their prayers and am encouraged by their great faith.

I grew up going to church with my family in New York City. My parents taught me the importance of faith and prayer from a young age. Though I was confirmed at a Presbyterian church as a child, I now consider myself to be a non-denominational Christian. Melania and I have gotten to visit some amazing churches and meet with great faith leaders from around the world. During the unprecedented COVID-19 outbreak, I tuned into several virtual church services and know that millions of Americans did the same. Thankfully, many great churches are now back open and meeting in person. In fact, just this past weekend I visited the International Church of Las Vegas and enjoyed a beautiful service.

4. What have you done to help persecuted Christians around the world?

Under my leadership, the United States of America will always stand for freedom of religion. I brought Pastor Andrew Brunson home from a prison in Turkey. I sanctioned the communists and socialists in Cuba and Venezuela because they don’t respect religious freedom. My State Department held the largest human rights event in history several years in a row during which I hosted multiple survivors of religious persecution in the Oval Office. Last month, we highlighted the importance of religious freedom in the very first paragraph of the historic Abraham Accords.

Last year, I was proud to become the first United States President to host a meeting at the United Nations on protecting religious freedom around the world. In my speech, I reminded the world’s leaders that our rights do not come from government, they come from God — and I explicitly called upon the nations of the world to end religious persecution.

I followed that event with an Executive Order on Advancing International Religious Freedom that solidified America’s own commitment to this critical issue, by naming it as a foreign policy priority of the United States and promising that we will respect and vigorously promote this freedom. My Administration has protected religious freedom worldwide by increasing funding for programs that aid persecuted religious communities.  As I said at the United Nations, America stands with believers in every country who ask only for the freedom to live according to the faith that is within their own hearts.  And we will continue to do so for as long as I am President.

5. You have continued the efforts of past administrations to have a “faith-based office.” What specific results have been produced by the Faith and Opportunity Initiative since you established it in 2018 and, if you are re-elected, what do you expect it to accomplish in the coming years?

I signed an executive order in May 2018 that established a White House Faith and Opportunity Initiative to ensure Americans of faith have a voice in their government.

The White House Faith and Opportunity Initiative serves as the front door for the faith community. Under my Administration, we have established an office or liaison in every Cabinet agency for the first time. This office has hosted thousands of faith leaders for briefings at the White House to hear their ideas and partner with them on preserving religious freedom, protecting our values, alleviating poverty, strengthening marriages and families, increasing mental health care, curbing substance abuse and addiction, ending homelessness, reducing crime, and reforming our prisons. Led by Pastor Paula White, this Initiative is working to remove barriers which have unfairly prevented faith based organizations from working with or receiving funding from the federal government. I am very proud of the work we have done to safeguard American values and to protect our great First Amendment.