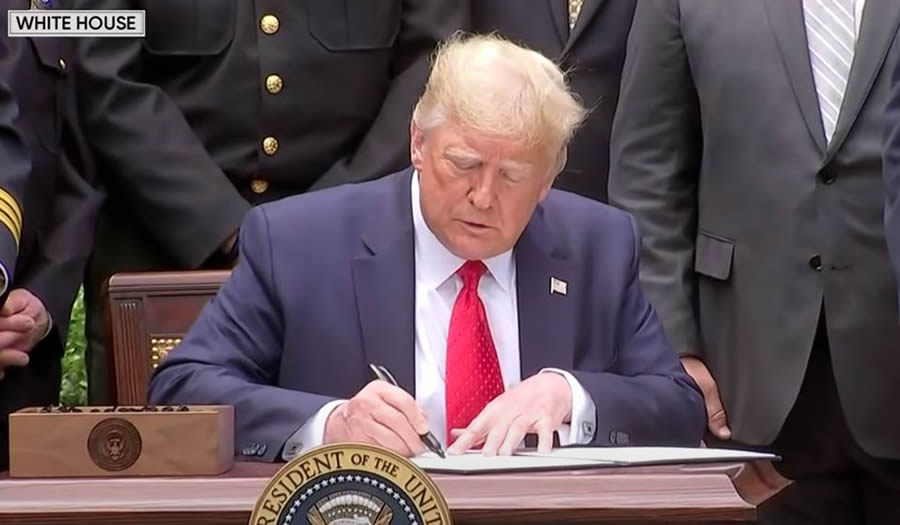 President Donald Trump is taking unprecedented action to strengthen the relationship between law enforcement and their local communities by recognizing the need to invest more energy and resources in police training and by supporting efforts to bring the police and communities together.

Meanwhile, Democrat nominee for President Joe Biden — who has been in public office for almost half a century — remains silent, hiding in his basement, as radical-left elements of the Democrat Party attempt to tear the nation apart.

While Biden and the Democrats continue to disparage President Trump on this issue, the fact of the matter is, President Trump accomplished in 40 minutes what Mr. Biden couldn’t do in 40 years — common-sense reform that encourages law enforcement agencies to implement best practices and protect the communities they serve.

Six months ago, the president established the Presidential Commission on Law Enforcement and the Administration of Justice — the first commission on law enforcement in half a century.

Under Tuesday’s Order, the Attorney General will allocate certain grant funding to only those law enforcement agencies that meet high standards, including around use-of-force and de-escalation, as credentialed by reputable independent bodies.

The E.O. also provides incentives for law enforcement agencies to use a nationwide database to track terminations and criminal convictions against law enforcement officers for excessive use-of-force, which will create accountability between agencies so misconduct isn’t simply swept under the rug or lost under a deluge of paperwork.

Contrast the president’s concrete steps to create real change to Joe Biden’s empty rhetoric and inaction as a 44-year career politician. President Trump is working to increase transparency and accountability in policing across America.

In the 1990’s Biden led efforts to pass the infamous legislation that eliminated judicial discretion in sentencing, which had a disproportionate impact on black communities, targeting young black men for low level offenses.

President Trump has led the way on groundbreaking criminal justice reform, taking a smart-on-crime approach to make our communities safer.

Biden’s efforts were never about actually reducing crime, but to advance his own political career. He supported efforts to eliminate parole and prison capacity requirements to appear “tough on crime.” He now embraces efforts to destabilize order and turns a blind eye to the destruction of communities.

Mr. Biden even bragged about how he ensured that individuals found with even a quarter-sized amount of crack cocaine would go to jail for 5 years. “You get no probation, you get nothing other than five years in jail — judge doesn’t have a choice,” Joe Biden said at the time.

Meanwhile, the President leads in building a better American future and a more just society based on the rule of law.

President Trump understands the importance of supporting our law enforcement community, a vast majority of whom serve and protect their communities with honor and dignity.

While Joe Biden continues to engage in divisive rhetoric to demonize law enforcement, President Trump understands the importance of close ties between law enforcement and the communities they serve.

President Trump is taking real action to unite the country and ensure safer communities for all Americans.

Joe Biden continues his campaign of “all-talk, no-action,” by continuing to criticize the president from the comfort of his own basement.

Mr. Biden is focused on ways he can further divide the country, attempting to score cheap political points off the emotion and pain of the black community.

President Trump is leading through his actions, including Tuesday’s executive order which will help unite all Americans as we work towards a more perfect union.

Ken Blackwell is the former Mayor of Cincinnati, Ohio, and U.S. ambassador to the United Nations Human Rights Commission.