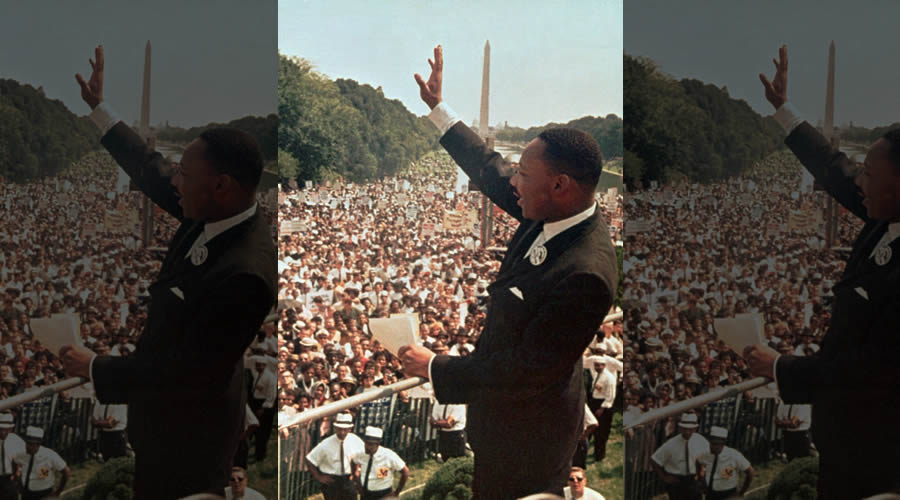 FILE - In this Aug. 28, 1963 file photo, the Rev. Dr. Martin Luther King, Jr. acknowledges the crowd at the Lincoln Memorial for his "I Have a Dream" speech during the March on Washington.

One hundred years after President Abraham Lincoln issued the Emancipation Proclamation, the great Reverend Dr. Martin Luther King, Jr., took to the steps of the Lincoln Memorial and shared his vision of an America lifted from the “quicksands of racial injustice to the solid rock of brotherhood.” His extraordinary message that momentous day in August of 1963 stirred to action Americans of every race and creed, and it continues to reverberate in the hearts and minds of patriotic citizens across our great land. Today, as we pause to mark the life and legacy of Dr. Martin Luther King, Jr., we recommit ourselves to the advancement of equality and justice for all Americans, and to the full realization of his worthy dream.

Opportunity for All Americans

In the United States of America, every citizen should have the opportunity to build a better and brighter future, and, as President, I am committed to expanding opportunity for all Americans. We have added more than 5 million new jobs to the economy over the past 2 years and unemployment rates for African Americans, Hispanic Americans, Asian Americans, and Americans without a high school degree have reached record lows.

Importantly, we have also worked tirelessly to reform our Nation’s criminal justice system, so that those who have been incarcerated and paid their debt to society are given a second chance at life. Last year, I was proud to sign into law the First Step Act, which will prepare inmates to successfully rejoin society and effect commonsense reforms to make our justice system fairer for all Americans. Through recidivism reduction programs that provide vocational training, education, and mental healthcare, non-violent offenders can have a chance at redemption and an opportunity to fulfill a better destiny.

We have also made great strides as a Nation, but we acknowledge that more work must be done for, in the words of Dr. King, “justice to roll down like waters and righteousness like a mighty stream.” United as one American family, we will not rest — and we will never be satisfied — until the promise of this great Nation is accessible to each American in each new generation. More than half a century after Dr. King’s March on Washington for Jobs and Freedom, our Nation is mindful of its past, and we look forward to the future with unwavering optimism, inspired by the legacy of Dr. King and informed by his wisdom and vision. May the memory of Dr. Martin Luther King, Jr., and the efforts we have made to fully effectuate his dream, remind us that faith and love unite us together as one great American family.

NOW, THEREFORE, I, DONALD J. TRUMP, President of the United States of America, by virtue of the authority vested in me by the Constitution and the laws of the United States, do hereby proclaim January 21, 2019, as the Martin Luther King, Jr., Federal Holiday. On this day, I encourage all Americans to recommit themselves to Dr. King’s dream by engaging in acts of service to others, to their community, and to our Nation.

IN WITNESS WHEREOF, I have hereunto set my hand this eighteenth day of January, in the year of our Lord two thousand nineteen, and of the Independence of the United States of America the two hundred and forty-third.

As Racial Tensions Rage, These Two Christian Ministers Have a Dream