President Trump Can’t Catch a Break — Even in Church 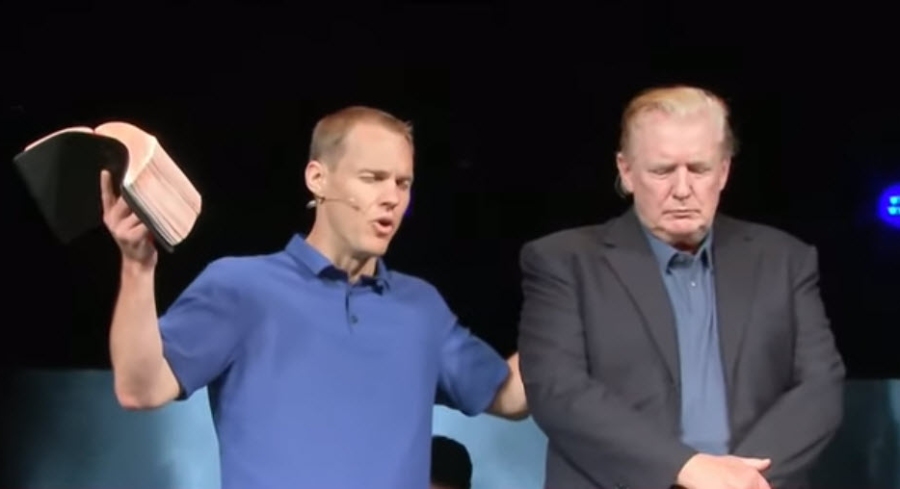 Some deem President Donald Trump so contemptible that it’s morally acceptable, even required, to suspend ordinary rules of civility toward him.

I’m not saying Trump should be off-limits; no one is, and certainly not the president of the United States. But it’s ironic that the very people who sanctimoniously condemn him for his supposed incivility apparently believe they themselves don’t have to be civil toward him.

This is a recurring issue, but what brings it to mind today is the controversy over Pastor David Platt’s praying for President Trump when Trump made an unscheduled stop at his McLean Bible Church in Vienna, Virginia, last Sunday. The president was returning to the White House from a golf outing and visited to pray for the victims of the mass shooting in Virginia Beach, Virginia.

During his service, Platt was called backstage and informed that Trump was on his way to his church and would like for the church to pray for him. Trump arrived and stood onstage while Platt prayed for him, and then Trump walked off the stage without comment.

Later, Platt posted a statement on the church website explaining his decision to pray for Trump, presumably because some members of the congregation complained about it.

When I read about this, my first instinct was to express my disappointment with the pastor’s pandering to certain Trump-hating congregants who seem to believe, like many other Trump haters, that all rules of decorum are suspended when it comes to Trump and, in this case, that even God’s directives don’t apply. Forget God’s command to pray for our leaders, because despite His omniscience, He surely didn’t anticipate a president like Trump when he inspired that passage and others.

After further considering this and reading his statement, I concluded that Platt was in a very difficult situation. He must honor God’s Word, but he mustn’t harm the Gospel message by allowing confusion among his congregants concerning his motives to cause discord in the church.

His statement is not an outright apology because he didn’t express regret for obeying God’s command that we pray for our leaders. “I know that it is good, and pleasing in the sight of God, to pray for the president,” he said. But he went on to say something that does bother me: “I wanted to share all of this with you in part because I know that some within our church, for a variety of valid reasons, are hurt that I made this decision. This weighs heavy on my heart. I love every member of this church, and I only want to lead us with God’s Word in a way that transcends political party and position … So while I am thankful that we had an opportunity to obey 1 Timothy 2 in a unique way today, I don’t want to purposely ever do anything that undermines the unity we have in Christ.”

You see, he didn’t apologize for praying for Trump. That’s good. It’s also good that he affirmed that God’s Word transcends politics. I certainly don’t want my pastor to preach politics from the pulpit — though some would incorrectly argue that taking a strong stance against certain sins is preaching politics.

But where I think Pastor Platt erred is in expressly validating the hurt feelings of some congregants. They have no right to be hurt over his biblically mandated prayer for the president, and they ought to be repentant, rather than accusatory, for implying otherwise.

It would have been fine if Platt had said, “I was simply honoring God’s Word. I was not endorsing the president from the pulpit or making a political statement.” That would be a legitimate clarification if some members thought Platt was trying to make an indirect political endorsement. He also has a strong biblical duty to promote church unity, and issuing a clarifying statement can be very helpful.

But that’s not all that happened, and so we are left with a message, surely unintentional, that Trump antipathy is so justified that Christians have a right to be angry when God’s unambiguous Word is followed.

I appreciate Pastor Platt’s obedience to Scripture and the difficult situation in which he found himself. I applaud his efforts to honor the Apostle Paul’s inspired command that we promote church unity. It’s just too bad that he went further and sanctioned the invalid objections of congregants to his prayer for the president.

Giving Platt the benefit of the doubt, I assume he meant that they would have had valid reasons to object to his pulpit endorsement of Trump, if that had occurred, but it did not. If that’s what he meant, he didn’t express it well, whereas the rest of his statement was quite clear — and good.

Few people were more politically opposed to President Obama than I was, but I would not object to (and would support) any pastor praying for him. Nor do I think we would be reading about any pastor apologizing for having prayed for Obama.

But Trump is different. All bets are off where he is concerned.

In our free country, people can treat President Trump as contemptuously as they want, but we should recognize their screaming hypocrisy when they treat him with the same level of incivility with which they condemn him.