Prayer March, POTUS and a SCOTUS Pick: What an Amazing Weekend We Had in Washington 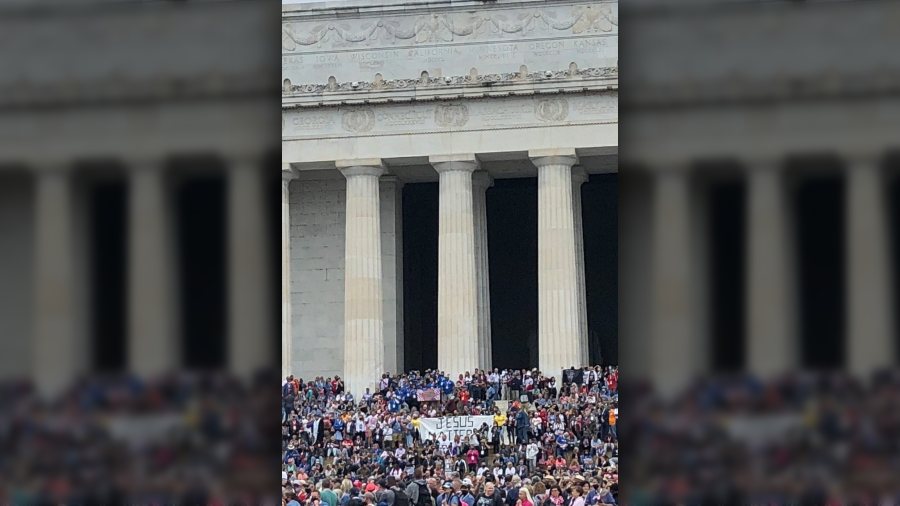 Editor’s note: The following is an email update sent to friends and partners of Campaign for Working Families. It is reprinted here by kind permission of the author.

I want to get today’s report out early summarizing this incredible weekend. Meanwhile, we’re busy working on several projects related to the nomination of Judge Amy Coney Barrett.

Friday night, Carol and I joined Rev. Franklin Graham and other faith leaders for dinner. Graham told us he had no idea how many people would show up for the Prayer March the next day. He spoke at length about the amount of fear in America from the coronavirus, the economy, racial and other divisions in the country.

But Graham added that if only a few hundred people showed up it wouldn’t be a failure because the Bible tells us that wherever two or three are gathered, God is there.

As Carol and I drove into Washington the next morning, we were heartened to see hundreds of people walking across the Memorial Bridge into Washington, D.C. I wish every American committed to faith, family and freedom could have seen what we saw as we arrived at the Lincoln Memorial. The estimates I am hearing are that between 100,000 and 200,000 people attended the Prayer March.

The crowd covered the steps of the Lincoln Memorial (I posted a picture on Twitter and Facebook) and stretched back all along the National Mall. People began spontaneously singing various hymns, and later Michael W. Smith led the crowd in worship songs.

When Franklin Graham began speaking and announcing the order of events, the crowd began applauding and reacted in ways that seemed surprising. What they were seeing, completely unbeknownst to Reverend Graham, was that Vice President Mike Pence had unexpectedly arrived.

Pence reminded the crowd about America’s deep religious heritage. He thanked the audience for their prayers, and urged them to keep praying for our leaders in public office, for our men and women in uniform in the military and law enforcement, for our doctors and nurses, for those grieving and for our country.

We marched as a group to various locations along the National Mall, including the World War II Memorial, the White House and the African American History Museum. We prayed at each stop and ended the March at Capitol Hill.

If you missed the Prayer March this weekend, you can watch this replay, courtesy of the Billy Graham Evangelistic Association.

At The White House

I returned home briefly to change clothes and headed back to Washington to go to the White House. There I joined about 200 conservative and faith leaders in the Rose Garden for President Trump’s nomination of Judge Amy Coney Barrett to the U.S. Supreme Court.

Barrett’s nomination is the culmination of decades of hard work and prayer for me personally, going back to the confirmation of my good friend Justice Clarence Thomas, and for many other conservatives. We are now on the cusp of finally achieving a conservative majority on the Supreme Court.

I know why the left hates Barrett so much. She is a living testament to our values. She and her husband have five biological children, one with Down syndrome. She also has two adopted children from Haiti. I’m not sure even she understands how threatening that is to the left’s narrative of who Christians and conservatives are.

Believe it or not, Barrett is now being attacked by the left for her adoption of two black children from Haiti. Ibram Kendi, director of the Center for Antiracist Research at Boston University, compared Barrett to a “white colonizer.” Barrett loves America, but Kendi leads an entire department at Boston University that believes America is racist and evil.

I believe the left’s tactics will fail, but I am under no illusions about just how brutal this upcoming battle will be. For example, it is clear that one of the main thrusts of the left’s attack will be tying Barrett’s nomination to healthcare.

They are claiming that President Trump and Republicans, during a pandemic, want to rip away the healthcare millions have received under Obamacare. They argue that many Americans will end up with long-term effects from COVID-19, which will become pre-existing conditions, thereby denying them coverage in the future.

This is fearmongering, but every liberal in the media was repeating this lie non-stop all weekend.

Let me close this message by returning to the theme of the weekend: Please pray for Judge Barrett and her family. Pray for the senators who will soon conduct her confirmation hearing and vote on her nomination to the Supreme Court.

And pray for an end to the coronavirus and healing for the racial and political divisions that are causing so much unrest in our nation.

Copyright © 2020 Campaign for Working Families, All rights reserved. Reprinted by permission of the author.