Prager: If Holocaust Deniers Don’t Go to Hell, There Is No God 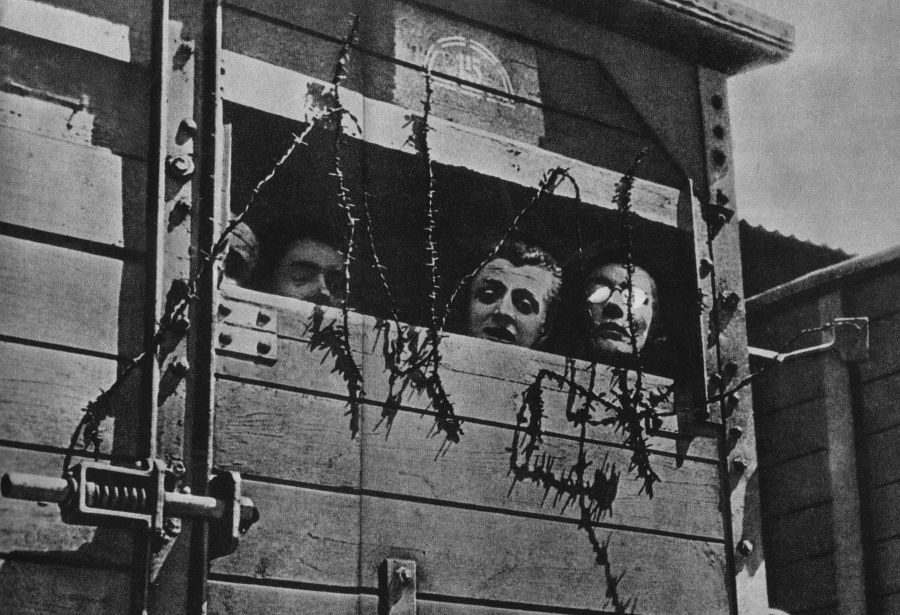 It is a central tenet of moral theology that there are gradations of sin. To argue that God views stealing a towel from a hotel and raping a child as moral equivalents renders God a moral fool. And doing that to God is a sin. If we mortals perceive the universe of difference between such actions, it goes without question that God does, too. The idea that we have greater moral clarity than God is logically and theologically untenable.

In the pantheon of evils, among the worst is Holocaust denial.

Given the murder of 6 million Jews and the unspeakable amount of suffering they and Jewish survivors underwent at the hands of the Nazis, it takes a particularly vile individual to say this never happened. Think of how we would regard anyone who denied thousands of Americans were murdered on 9/11.

A Horror That Had to Be Seen to Be Believed

Gen. Dwight D. Eisenhower, along with Gens. George Patton and Omar Bradley, visited Ohrdruf, a Nazi concentration camp, on April 12, 1945, a week after it was liberated.

The things I saw beggar description… The visual evidence and the verbal testimony of starvation, cruelty and bestiality were so overpowering as to leave me a bit sick. In one room, where they were piled up twenty or thirty naked men, killed by starvation, George Patton would not even enter. He said that he would get sick if he did so. I made the visit deliberately, in order to be in a position to give first-hand evidence of these things if ever, in the future, there develops a tendency to charge these allegations merely to ‘propaganda.’

A week later Eisenhower again cabled Marshall, asking that members of Congress and journalists be brought to the newly liberated camps so that they could tell Americans the truth about German Nazi atrocities.

Patton wrote in his diary:

When we began to approach with our troops, the Germans thought it expedient to remove the evidence of their crime. Therefore, they had some of the slaves exhume the bodies and place them on a mammoth griddle composed of 60-centimeter railway tracks laid on brick foundations. They poured pitch on the bodies and then built a fire of pinewood and coal under them. They were not very successful in their operations because there was a pile of human bones, skulls, charred torsos on or under the griddle which must have accounted for many hundreds.

To his great credit, Eisenhower understood that what the Nazis had done to the Jews (and many others, but overwhelmingly to Jews) would be difficult for humanity to comprehend and therefore needed to be documented in writing and in photographs. And, it is important to note, Eisenhower saw only a small concentration camp, not one of the enormous death camps.

A Dedication to Murder Every Jew

Beginning in about 1941, the Nazi regime dedicated itself to murdering every Jew — man, woman, child and baby — in countries it occupied. Eventually, more than six of every 10 Jews in Europe were murdered.

Nazi mobile killing units murdered more than a million Jews, usually family by family, in front of open ditches the Jews were forced to dig. Most died upon being shot; the even less fortunate ended up being buried alive. All witnessed the murder of their loved ones.

Most of the other murdered Jews were shipped in cattle cars to concentration and death camps where they were worked to death, starved to death, tortured to death and most often gassed to death in gas chambers.

There may not be a more documented single event in history than the Holocaust.

The Evil of Holocaust Denial

Yet, some people, including an American named Nick Fuentes, aggressively deny the Holocaust, asserting that a few hundred thousand Jews, not millions, were killed.

It is important to understand why this is evil.

First, it is a Big Lie. Big Lies inevitably lead to violence and can even destroy civilizations.

If the Holocaust never happened, why would Germany maintain that it did?

Second, Holocaust denial is not only a Big Lie; it is pure Jew-hatred, i.e., antisemitism. The proof that it emanates from antisemitism is that no other 20th-century genocide is denied (with the exception of the Turkish government’s denial of the Turks’ mass murder of Armenians during World War I). No one denies Stalin’s mass murder of tens of millions of Soviet citizens in the Gulag Archipelago or his deliberate starvation of about five million Ukrainians (the Holodomor); or the Cambodian communists’ murder of about one in every four Cambodians; or Mao’s killing of about 60 million Chinese. The only genocide-denial is the genocide of the Jews.

As a college student, I dated a woman whose parents were Holocaust survivors. She told me on a number of occasions how often she would hear her father scream in the middle of the night as he dreamed about watching his family be murdered. Unable to live with these memories, one night, her father hanged himself.

That man is one of millions of reasons Fuentes — and those who ally themselves with him — will go to hell. If there is a just God.

COVID-19 and the Failure of America’s Major Religions

Holocaust Remembrance Day and the Fight Against Antisemitism