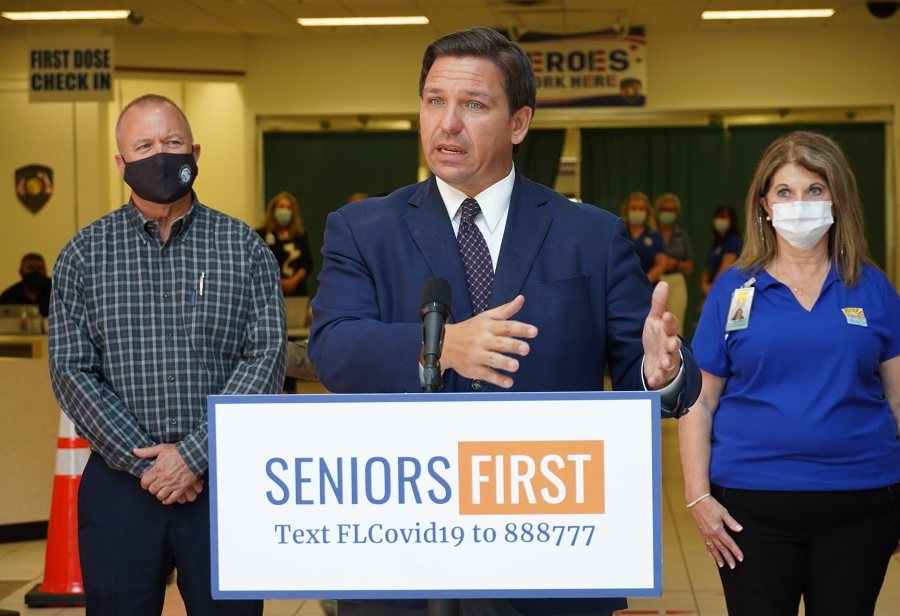 Good news for Florida Gov. Ron DeSantis: the mainstream media must think he’s the frontrunner for the 2024 GOP Presidential nomination. Of course, you can only tell that because they’re obviously so determined to destroy him that they’ll trash their own reputations with garbage “exposes” like the one 60 Minutes ran on Sunday. So there’s a downside. But I doubt many Republicans put much trust in CBS (“Fake but accurate!”) News anyway.

Jennifer Van Laar at RedState.com has a good rundown on the 60 Minutes hit piece and why it’s complete hooey.

In short: the claim is that DeSantis let Publix drug stores have the coronavirus vaccine first because they donated to his campaign. And since Publix serves Palm Beach County, DeSantis let wealthy seniors “cut the line” to get vaccinated first.

The Director of the Florida Division of Emergency Management, who is a Democrat, denounced that claim as “utter nonsense,” saying that all major pharmacy chains were offered the vaccine, but Publix was just the first one that was ready to distribute it.

Worse, DeSantis already spoke about this, but 60 Minutes deceptively edited the video, cutting it off before he got to the part explaining the vaccine rollout.

Read the Redstate article to see how low the media will go to kneecap any Republican they see as a threat to Democrat power. Meanwhile, I’d like to address another aspect of this story, and that’s how it’s based on a ridiculous false stereotype that the Republicans only care about the rich.

The False Stereotype of Republicans and the Ultra-Wealthy

That one’s been repeated until it has a gray beard longer than Santa Claus’s. But I’d like to ask the 60 Minutes reporter and others who parrot this outdated old saw, just who are these ultra-wealthy people the Republicans cater to? Are the tech billionaires like Bill Gates, Mark Zuckerberg and Jack Dorsey Republicans? Amazon founder and Washington Post owner Jeff Bezos? Mark Cuban? All those Wall Street bankers that Trump hated and Obama bailed out? Hollywood celebrities and entertainment moguls? Jay-Z? The CEOs of Delta, Coca-Cola and Major League Baseball?

It’s Republicans who tried to secure the border and create jobs for working Americans, who finally saw their wages rise for the first time in decades. The minute he got into office, Biden issued a flurry of executive orders destroying those jobs and flinging open the border to ensure a steady supply of low wage workers — great for wealthy corporate CEOs but terrible for workers, whose wages are depressed by mass immigration.

The GOP has become the party of the working class and the Democrats the party of wealthy urban elites. The reason they have to keep screaming “racist” at everyone who tells the truth about them is because their biggest fear is that minorities and working people who’ve been voting Democrat for decades out of force of habit will wake up and realize that times have changed, this is no longer their grandpa’s Democratic Party, and the people running it couldn’t care less about what’s good for everyday working Americans.