Porking Out With Your Money 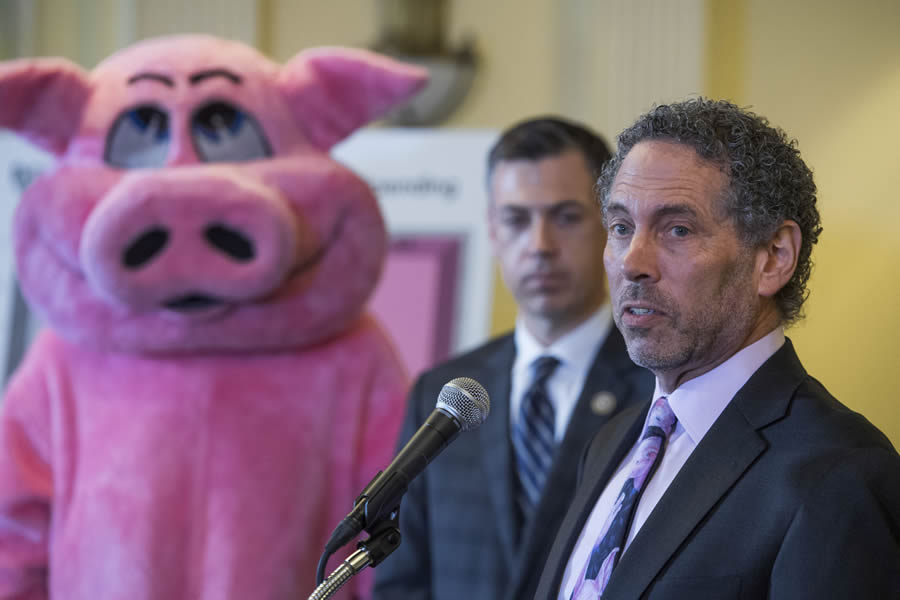 Citizens Against Government Waste (CAGW), a nonprofit, nonpartisan organization working to eliminate governmental waste and fraud, just released its 2017 Congressional Pig Book, an annual publication highlighting wasteful government spending that should embarrass each and every member of Congress.

While it is true that most government spending is for “entitlements” and other fixed costs, the “Pig Book” properly ridicules politicians who waste significant amounts of money on questionable programs.

In 2011, Congress promised to go on the wagon when it came to pork. That didn’t last long because pork to politicians is like blood to a vampire.

Members promised to swear-off earmarks, which is spending attached to bills that don’t go through the appropriations process. As CAGW notes, despite that supposed moratorium, earmarks keep showing up in numerous bills. The “Pig Book” exposes 163 earmarks in the fiscal 2017 budget, an increase of 32.5 percent from 123 in fiscal 2016.

You owe it to yourself to get this book at cagw.org. Check your outrage meter when you’re done. In 2014, Sen. John McCain (R-Ariz.) called earmarks “a corrupt system.” And it’s bipartisan, perhaps the only activity that qualifies for such a designation in divided Washington.

There’s $150 million going to the Department of Defense for the National Guard Counter-Drug Program. The Drug Enforcement Administration, which has a budget of $2.1 billion, is already responsible for these activities, but duplication is no reason to stop the spending.

How about $15 million for alternative energy research within the Combat Vehicle and Automotive Technology program? Since FY 2004, Congress has used the Defense Appropriations bill as a vehicle to insert 27 earmarks worth $289.9 million for this purpose, despite the billions already appropriated for alternative energy research through the Energy and Water Development Appropriations Act. Aren’t we already exporting natural gas and headed toward energy independence with less reliance on Middle East oil?

“Legislators have long treated the Army Corps of Engineers as a prime repository of pork,” notes CAGW, “and it is among the most heavily earmarked areas of the federal budget. Since FY 1996, members of Congress have added 6,916 earmarks for the Corps, costing taxpayers $12.8 billion.”

A lot of this spending, of course, goes straight to a member’s state or congressional district and is designed to sustain politicians in office.

One item not in the “Pig Book,” but reported by the Washington Free Beacon, is $224,999 for a clean water video supplied by the National Institutes of Health that is aimed at helping children “right the environmental wrongs” in a fictional town. My free “program” growing up was from my conservationist father who told me not to throw trash on the ground or in the creek behind our house.

Back to the “Pig Book”: $2.387 million for “advanced materials and structural safety within the Airport and Airways Trust Fund (AATF), through which the Federal Aviation Administration finances infrastructure improvements for airports.”

The CATO Institute, a public policy think tank based in Washington, D.C., has noted that the AATF has the indirect effect of preventing competition among airlines at airports. Because the AATF allows for only limited funding for maintenance and improvements, airports are limited in the number of gates they can build. As a result, airports ration gate access through long-term contracts with established companies, creating a barrier for potential competitors.

I’m betting that some of the recipients of this largesse probably contribute to their benefactor’s political campaigns. It’s the way Washington works, or more accurately, doesn’t work, at least not to the benefit of taxpayers.

The larger point is not whether any of these earmarks produce anything that benefits anyone other than the recipients of the money. It is whether all this spending is constitutional and something the federal government should be doing in an age when the national debt continues to grow.

Don’t read the “Pig Book” and weep. Read it, get angry, call your representatives and ask them to give up earmarks for good.