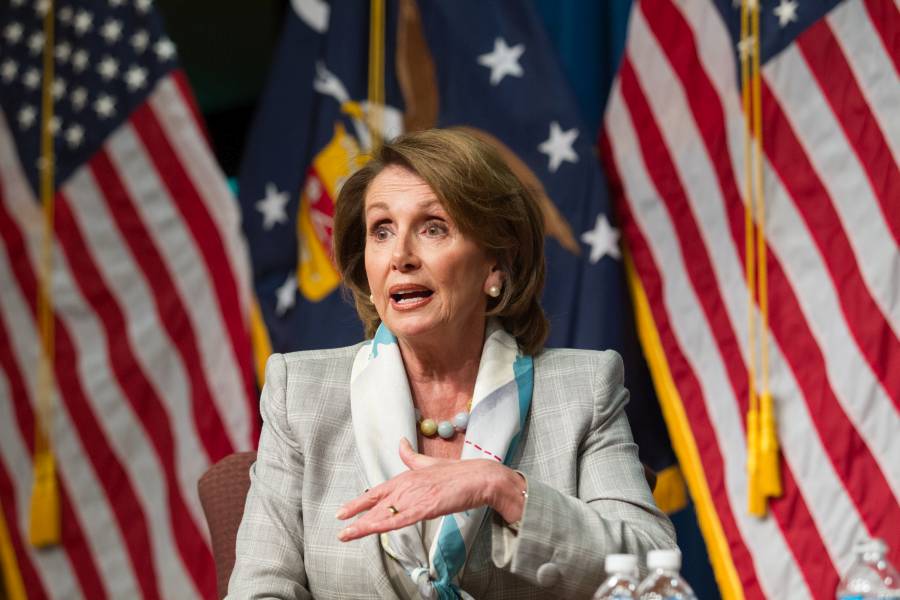 Nancy Pelosi is feeling the pressure right now. Even a growing number of Democrats are calling for her to be done with it and send the Impeachment Articles to the Senate at long last. Truly, the impatience with her is something being felt on both sides of the aisle, albeit for different reasons.

“I just hope to find a woman that’ll hold me as tight as Nancy Pelosi’s holdin’ onto those impeachment articles,” Rep. Gaetz said. We all wish him well in that endeavor.

He also dropped what I would consider a blockbuster: news that representatives — especially the 31 who are in districts won by Donald Trump — were told if they didn’t vote for impeachment, they wouldn’t receive party funding. As Gaetz put it, Pelosi “actually used political money as a weapon to threaten a lot of these folks to vote for impeachment.”

“They were told if they did not vote for impeachment, they could not expect funding from the DCCC in their races,” Gaetz revealed. “This wasn’t a sincere effort to abide by the rule of law. It was a political hit job by Democrats because they have no substantive argument against the Trump presidency.”

“…Pelosi has been exposed and the impeachment dam is breaking,” said Stefanik. “We need to continue to keep the pressure up because she has no authority over the Senate, so it was absolutely audacious and outrageous that she has been willing to withhold this, after urging the American people and Democrats forcing them to take this vote on an arbitrary schedule.

“The real reason why I think she’s holding back,” Stefanik said, “is she does not want to expose the coordination that we know happened between Adam Schiff and the whistleblower.”  I think that with this comment, Stefanik nailed it.  The curtain is going to be pulled back, big-time.  Can’t wait.

In a Wednesday interview with Laura Ingraham, California Republican Rep. Kevin McCarthy reminded viewers that Nancy Pelosi, being from San Francisco, is actually Sen. Feinstein’s “hometown” member of Congress. And even Feinstein is getting impatient with Pelosi. “If we’re going to do it, she should send them over,” Feinstein reportedly said. “I don’t see what good delay does.”

Ingraham asked McCarthy what would happen if the House decided, independently, to subpoena John Bolton, in hopes of getting information from him after the fact and somehow “backfilling” the impeachment case. McCarthy stated what is now the obvious: the House had the opportunity to subpoena any witnesses they wanted, but they seemed to think impeachment was so urgent that they went with the information they had. “They know their case is so weak,” he said, “it’s almost like she doesn’t want to send it, like she’s embarrassed [about] it.” Indeed.

Sen. Lindsay Graham has been talking about changing the rules in the Senate to allow for them to take up the impeachment without actually receiving the Articles. He’s also crafted a resolution calling on Pelosi to send the Articles to the Senate. “The refusal by the Speaker to transmit the Articles is a flagrant violation of the separation of powers,” he wrote. (Well, that’s debatable, but it sure is a flagrant violation of protocol and common sense.) He calls on Pelosi to immediately appoint impeachment managers and transmit the Articles.

If Pelosi doesn’t do this, it would take a simple majority to change the Senate rules, according to Bob Barr, former Clinton impeachment manager. He told Ingraham that “the Senate can do that any time it wants to…and they can do that pretty much any time.” Still, there’s one factor he didn’t mention, though Ted Cruz has brought it up: the possibility of a filibuster, which can happen without 67 votes to end it. In effect, Cruz says, it would take 67 votes to get the Senate to move forward.

Senate Majority Leader Mitch McConnell has said he has enough votes in the Senate to to begin the trial without calling witnesses. And though Democrats would like to see former national security adviser John Bolton and acting White House chief of staff Mick Mulvaney testify, “My Democratic friends are losing patience,” McConnell said. The implication: some of those votes he has come from the Democrat side.

Former Whitewater deputy independent counsel Sol Wisenberg, also speaking with Laura, had an interesting take on the rules. Current Senate rules don’t even cover this situation, as they are supposed to be for handling the Articles of Impeachment once they’ve been delivered. Since they haven’t been delivered, they don’t apply. There are no rules for this situation, in which the House has voted to impeach the President but hasn’t delivered the Articles of Impeachment. “In my opinion,” he said, “what are called the ‘impeachment rules’ in the Senate don’t cover the situation we’re in. And I believe that they could establish new rules by majority vote and say, ‘Look, this is what we’re gonna do in this situation, unprecedented, and we’re gonna move forward.”

Finally, just as Rep. Stefanik was saying, we can bet both Pelosi and Adam Schiff are nervous about Republicans calling witnesses in the Senate, because they’re afraid of what might come out regarding collaboration with the so-called “whistleblower,” a.k.a. Eric Ciaramella (yep, that’s him, and he’s actually just a leaker who deserves no anonymity).

This goes to the very reason for the investigation of Trump’s phone call with Ukrainian President Zelensky in the first place. Schiff won’t release a transcript of Intel Community Inspector General (ICIG) Michael Atkinson’s closed-door testimony — it’s the only transcript he refuses to release. But Republican members of the House Intel Committee are now looking into Atkinson’s handling of the “whistleblower” complaint.

According to Devin Nunes, they sent a letter to Atkinson on September 30, which was responded to “in an inadequate way” on October 8. This week, they’re sending another letter that will give him another week to respond. “Someone is not telling the truth here,” Nunes told Laura Ingraham, “and that’s why they don’t want this testimony out.” There’s apparently more to this story; we don’t know it yet but Nunes does.

So what can the Republican minority do without subpoena power? Nunes says they have other means: getting other people to come in and testify, for one, and also hearing from other, REAL whistleblowers and informants who WANT to come in and talk to them. As for Atkinson, “essentially you have to either believe he’s in on it, or he’s incompetent.” The committee needs to see all the documentation and the changes made to the forms, rather than just taking his word that he made mistakes.

Here are more details; this article in American Thinker is a must-read: House Republicans are investigating the ICIG behind the Ukraine ‘whistleblower’

The House Impeaches a Ham Sandwich. But the Senate Won’t Bite.