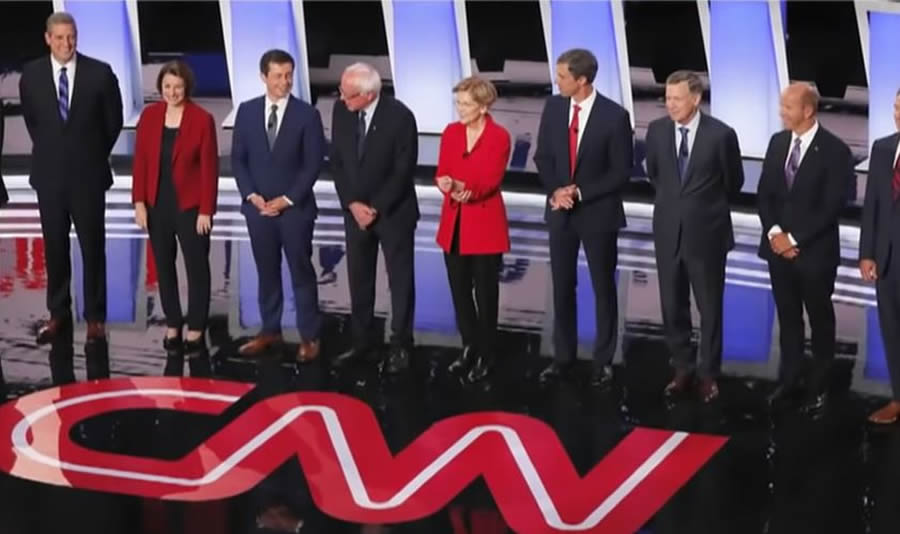 I was sitting at a policy roundtable in Washington, D.C., just hours after the recent Democratic presidential primary debates. It was the kind of conference-room event where acronyms for programs most of America has never heard of are earnestly discussed. If you were mischievous, you might set a drinking game to the word “supplemental” or the mention of a particular law or regulation or two. And yet, about three hours in, one of the self-described data-driven wonks at the table announced her policy prescription as “love.”

And that was a moment of confirmation for me about something I had been thinking during the first and second rounds of Democratic debates: Marianne Williamson could win the Democratic nomination.

Back in the D.C. policy room, that single insistence on love as the answer seemed to open something up. Soon, one of the most informative and frustrated people at the table then mentioned the bad-news fatigue that seems to burden everyone these days. She was self-aware to know that though the issues she spends her days on are urgent, even she would be tired of being inundated with the details if they didn’t have to do with her professional life. She was looking for something other than another law or regulation, too.

The conversation went back to policy and how to communicate the important but arcane minutiae in our overwhelmed reality. And I couldn’t shake something that reminded me of the 2016 presidential primaries and election. During that time, people from all walks of life would tell me: “I’m voting for Donald Trump because he isn’t a politician.”

Williamson isn’t a politician, either, and she sure isn’t serving up the usual soundbites. And for as much as she was laughed at on social media for talking about the “dark psychic force of the collectivized hatred,” the former president of the American Enterprise Institute, Arthur Brooks, who is now a professor at Harvard, basically just wrote a book on something like that — the ubiquitous contempt that motivates and feeds so much of our politics, and increasingly, our daily interactions. Williamson says we need healing, and she’s right.

We probably all need the civics lesson that Nebraska Sen. Ben Sasse would be all too willing to provide — as his social media presence and floor speeches have often made clear — to remember the principles and aspirations that our country was founded upon. We have to look at the many good, even great, things we still have, and figure out how to take better care of them.

I don’t actually want Williamson to win a major-party nomination for president, but if you consider that we seem to be addicted to presidential-level politics like it is the latest series on Netflix, she would make it more entertaining going into the general election. And that has been a winning strategy for the Republicans.

As the week of the second round of debates was winding down, I thought the words of Ephesians 4:29-32: “Never let evil talk pass your lips; say only the good things men need to hear, things that will really help them … Get rid of all bitterness, all passion and anger, harsh words, slander, and malice of every kind.” Imagine that being applied to our politics — or our every thought, word, deed and social-media interaction!

If we all tried to attain the self-discipline of love and leadership, we might not have to depend on our broken politics for redemption. If we’re watching out for each other in the everyday with the kind of generosity that is the stuff of the Beatitudes, our lives would not be as consumed by politics as they are now.

Like Trump, Williamson is not the problem or the savior, but she shows us something about our poisonous culture. The antidote is not in a political ticket, but the way we live our lives.