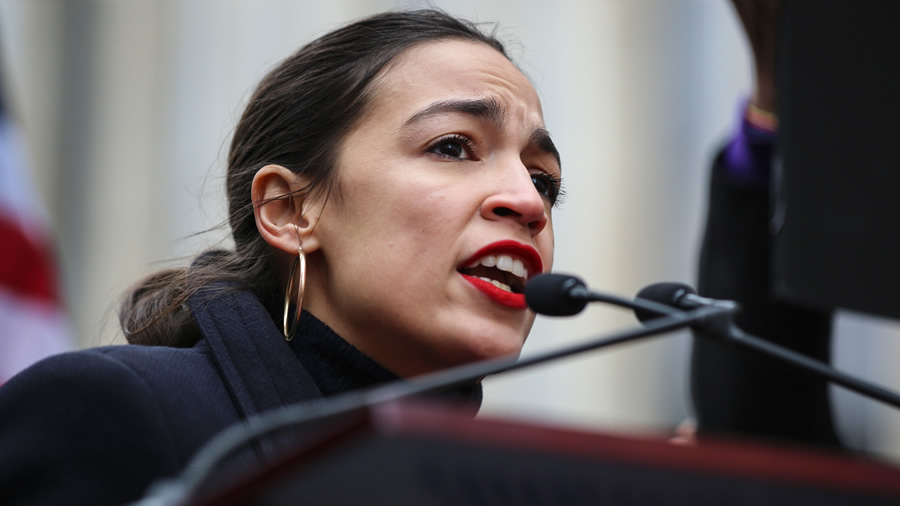 Congresswoman Alexandria Ocasio-Cortez may seem harmless, but she’s a virtue signaler on steroids and a nonstop headline-manufacturing machine.

The left adores her, and for conservatives she’s a gift that keeps on giving — because she is either too naive or arrogant to rein herself in. Don’t listen to those who advise not to be roped into her spotlight-seeking trap. Give her all the attention she craves — and more rope.

AOC conspicuously put her foot in her mouth again, but she clearly likes the taste of it because she refuses to remove it. “This administration has established concentration camps on the southern border of the United States for immigrants, where they are being brutalized with dehumanizing conditions and dying,” she tweeted. “This is not hyperbole. It is the conclusion of expert analysis.”

On Instagram she said: “The United States is running concentration camps on the southern border. And that is exactly what they are. They are concentration camps. And if that doesn’t bother you, I don’t — I like — we can have — OK, whatever. I wanna talk to people that are concerned enough with humanity to say that … ‘Never Again’ means something. And that the fact that concentration camps are now an institutionalized practice in the home of the free is extraordinarily disturbing. And we need to do something about it. … This is not even about a crisis for — this is not just about the immigrant communities being held in concentration camps being a crisis. This is a crisis for ourselves. This is a crisis on if America will remain America … or if we are losing to an authoritarian and fascist presidency.”

AOC immediately came under fire. On Twitter, Rep. Liz Cheney told her that she demeaned the memory of the 6 million Jews who were exterminated in the Holocaust and disgraces herself with her remarks.

AOC took umbrage, tweeting: “And for the shrieking Republicans who don’t know the difference: concentration camps are not the same as death camps. Concentration camps are considered by experts as ‘the mass detention of civilians without trial.’ And that’s exactly what this administration is doing.” AOC’s shameless denial that she was referring to Nazi concentration camps was disingenuous in view of her Instagram reference to “Never Again,” which is singularly associated with the Holocaust.

Rep. Dan Crenshaw tweeted back to her: “in concentration camps, people are unjustly sought out and confined. This isn’t what is happening at the border. Migrants are illegally crossing our border. Most are asylum seekers, thus pending trial, so your expert definition doesn’t apply. … Your comments reveal total disregard for our sovereignty & a deep ignorance that belittles the horrors of the Holocaust.”

Acting Immigration and Customs Enforcement Director Mark Morgan called AOC’s comments “completely inappropriate,” “reckless,” “irresponsible,” “misinformed” and “flat-out wrong.” He said, “there is so much oversight in these facilities. … I feel very satisfied that if you go to these facilities, whether it’s a Border Patrol facility, an HHS facility or an ICE facility, that there will be safe and adequate conditions to detain individuals.”

If you think AOC is merely some innocent ignoramus in a powerful position, think again. She intentionally and maliciously misrepresents the facts. She knows these immigrants are not being brutalized and dying, and that the authorities are doing the best they can, being understaffed and underfunded — because demagogues like her refuse to acknowledge the crisis and address it. As Rep. Crenshaw told her, “If you’re worried about conditions at the border, why don’t you do something about it & support @RepMikeRogersAL’s bill securing billions in humanitarian aid?”

House Minority Leader Kevin McCarthy called on AOC to apologize “not only to the nation but to the world,” but instead she doubled down. “DHS ripped 1000s of children from their parents & put them in cages w inhumane conditions,” she tweeted. “I will never apologize for calling these camps what they are. If that makes you uncomfortable, fight the camps — not the nomenclature.”

AOC’s colleague, the reliably obnoxious House Judiciary Chairman, Jerrold Nadler, undercut her lame denial that she invoked the Holocaust. “One of the lessons from the Holocaust is ‘Never Again’ — not only to mass murder, but also to the dehumanization of people, violations of basic rights, and assaults on our common morality.”

It’s no secret that today’s leftist extremists are no friend of the Jews, but where are the famous liberal fact-checkers — the watchdogs so dedicated to truth? Let them explain to AOC that migrants detained for breaking the law are not being placed in concentration camps. If she persists, she also condemns former President Obama for the same sin.

But here’s the good news. AOC is unteachable, because she is unwilling to be taught. Full of hubris, she already knows everything and is the champion of every leftist cause. She leads with her unbridled emotions, happily ignorant of the facts. House Majority Leader Nancy Pelosi would love to corral her but would not dare even hint at that, shrewdly recognizing the mob attraction AOC enjoys with the Party’s shrieking base. Pelosi knows better than to chastise AOC and so ducked the question when asked why AOC never shuts up.

Well, I’m with Pelosi, for different reasons. Please don’t shut up, AOC. We appreciate your drawing a sharp contrast every day between the noxious views of your party, which now dutifully embodies your extremism, and those representing responsible governance. Thank you for liberally exercising your First Amendment freedoms.