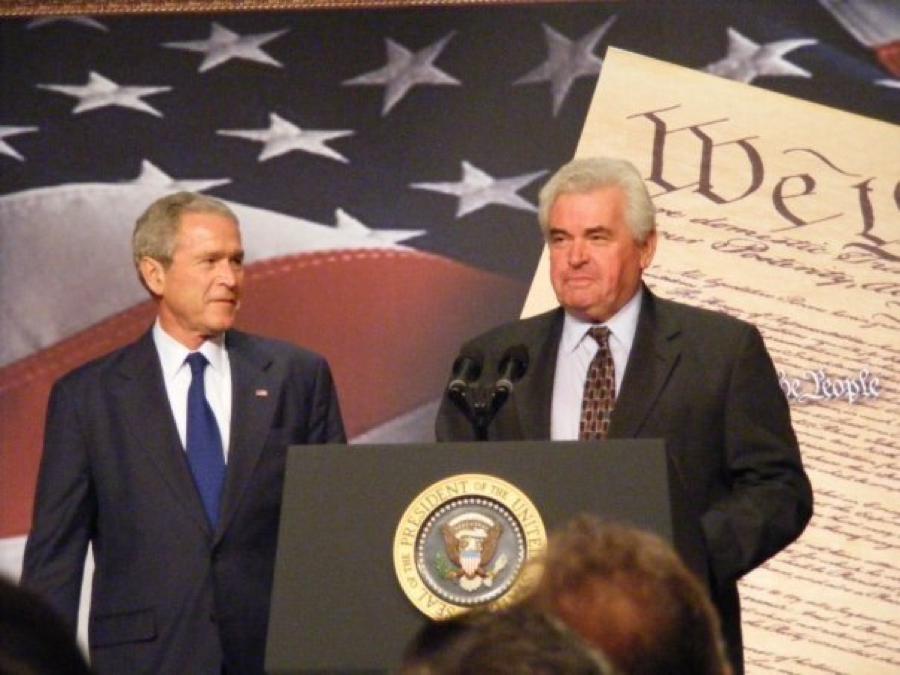 I knew it was coming. He’d been struggling with cancer. But it felt particularly poignant given that I was in Europe, a place Peter had little patience for.

It was an attitude he inherited from his father. During World War II, before Peter was born, William Schramm had been conscripted by the Nazis to work in a munitions factory. The Allies dropped leaflets warning that a bombing run was imminent. The Nazis demanded that everyone report for work anyway. William refused.

The Nazis were lining him up to be shot when the Allies unleashed the arsenal of democracy. Those inside the factory were killed, but the elder Schramm survived, thanks to a mixture of God’s providence and the lethality of the U.S. armed forces.

A little over a decade later, when Schramm was a boy, Hungary was torn apart by the 1956 uprising and once again providence spared Peter’s father. While out getting bread, a grenade landed right beside him but failed to detonate.

That did it. He told his son to pack his bags, the Schramms were moving. Where to? Peter asked.

His father replied, “We are going to America.”

“Because, son. We were born Americans, but in the wrong place.”

A half-century later, Peter wrote, “I’ve spent the better part of the last 50 years working to more fully understand these words.” He continued, “Dad, in his way, was saying that he understood America to be both a place and an idea at the same time. Fundamentally, it is a place that would embrace us if we could prove that we shared in the idea. We meant to prove it.”

Peter went on to become not only an exceptional scholar but a truly extraordinary teacher (since the 1980s at the Ashbrook Center at Ashland University). I was never a formal student of his, but I learned a great deal from him. A giant bear of a man with a riot of white hair more befitting a half-mad Hungarian composer, Peter was a walking seminar, a conversation machine.

Save for his family, what inspired him more than anything else was his unconquerable love of this country. Peter was no nationalist, in part because he understood, perhaps better than any man I’ve ever known, the difference between patriotism and nationalism.

Yes, America is a nation, but unlike other nations it is bound together not by blood and soil but by ideas, texts and creeds. “America invented freedom,” he was fond of saying. And if you think that’s an exaggeration, it’s only because you never sat in one of his classes or shared a drink or a cigar (or both) with the man.

Peter opposed illegal immigration because we are a nation of laws and laws must be respected. But he held his sharpest criticism not for immigrants, but for native-born Americans who think being born here doesn’t come with obligations. You can’t expect immigrants to buy into the American idea if the people living here have no idea what that is. “If we no longer understand or believe in that which makes us Americans,” he wrote in 2007 for The Weekly Standard, “then there is nothing substantive to assimilate into. We become many and diverse people who share a common place, rather than E Pluribus Unum.”

Forget about public policy for a moment. The immigration story is a conservative story. People like William Schramm, or my father-in-law who fled Czechoslovakia, or my great-great-great grandparents who fled the Russian pogroms or Sen. Marco Rubio’s parents or tens of millions of other Americans born in the wrong place, came to this country because it was both a place and an idea.

That idea — shockingly new and still rarer than you might think — is that we are all citizens, not subjects. The American idea holds that if people are permitted to exercise their right to self-government and to own the fruits of their labor, they can not only thrive but accomplish things never before imagined.

America will be remembered, Peter argued, not for putting a man on the moon, but for inventing this idea of freedom.

“You Americans invented freedom,” Peter told Powerline.com’s Steven Hayward. “You invented freedom. And you’re on your way to losing it” — not because of newcomers unwilling to become Americans, but because of natives unwilling to teach them. Such gloom wasn’t characteristic of Peter. But it’s deeply felt when one considers how much more daunting that teaching job will be without him.

Jonah Goldberg is an editor-at-large of National Review Online and a visiting fellow at the American Enterprise Institute. You can write to him at JonahsColumn@aol.com.