Foreign contractor with ties to Obama Foundation and George Soros is on the hunt for "extremism" in the ranks. 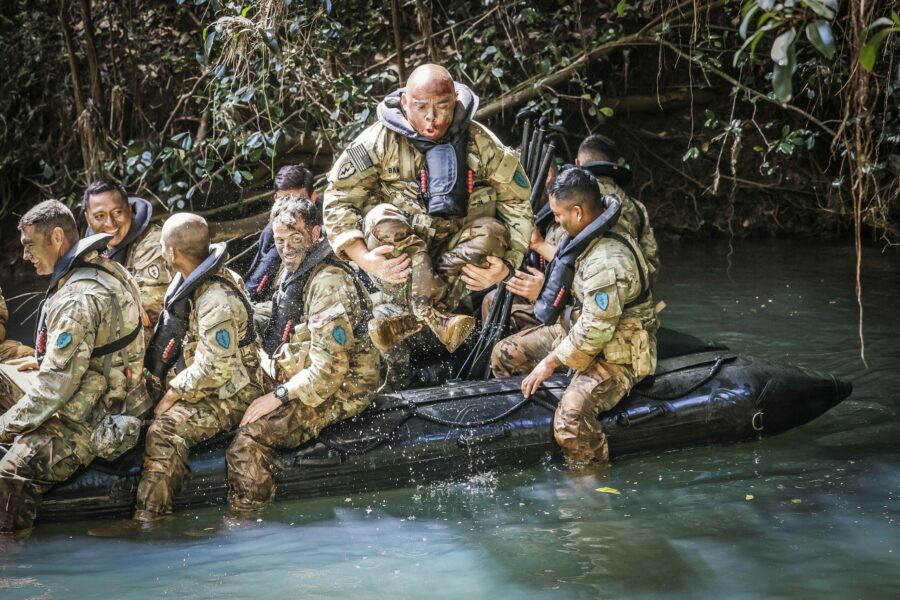 A soldier jumps out of a boat during competitive tactical events at Schofield Barracks, Hawaii, April 8, 2021. The three-day series of events was designed to build cohesive teams. Building cohesion, yes. Pushing division, no.

The Pentagon is working with a contractor to reportedly look into web searches such as “George Floyd deserved to die,” “Jews will not replace us” and “the truth about black lives matter” as potential signals of white supremacism, Fox News reported.

Pentagon contractor Moonshot CVE (Countering Violent Extremism), which has ties to the Obama Foundation, is gathering data to determine which bases and branches of the military have the most troops searching for domestic extremist content, Defense One and Fox News reported.

The exact details of the project are not clear, but the data is expected to be available in three weeks, Defense One reported. Moonshot Founder and CEO Vidhya Ramalingam said the data suggested active duty troops are less prone than the general American public to searching for violent extremism information.

A Moonshot report in June, conducted along with the Anti-Defamation League (ADL), researched white supremacy trends in the U.S. and “monitored a list of almost 1,600 indicators of interest in or engagement with White supremacism, focused specifically on anti-Black and anti-Semitic narratives being used by extremist groups,” the Moonshot report said.

ADL and Moonshot’s research on online white supremacy culminated in the report, “White Supremacy Search Trends in the United States.” Find out more here: https://t.co/zPCXZYcKtX
Consider donating to ADL so we can continue to collaborate successfully: https://t.co/508JwtYZSC

For the phrase, “the truth about black lives matter,” Moonshot attributed the search to the idea “that the BLM movement has nefarious motives, and is a disinformation narrative perpetuated by White supremacist groups to weaponize anti-BLM sentiment,” and that the search phrase appears “innocuous,” but that books include the phrase in their title to assert that the BLM movement is in line with the burning and looting of Antifa, the report said.

“These sources echo White supremacist disinformation narratives alleging that BLM protesters are trying to ‘overthrow the republic’ and ‘harm American citizens in a Marxist coup,’ as a means of delegitimizing it,” the report said. It also said multiple videos on YouTube use the exact phrase to promote these narratives and criminalize BLM.

It is not clear why the Pentagon chose a U.K.-based company for researching alleged American extremism, Fox News reported.

The Center for Security Policy reported that Ramalingam wrote a 2013 paper about immigration in Europe that was funded by a grant from George Soros’ Open Society Foundations, and was a leader in the Obama Foundation’s Europe program.

Along with ties to progressive organizations, she was a part of a panel hosted by the Southern Poverty Law Center (SPLC), Fox News reported.

Ramalingam reportedly met with Pentagon officials last week, Defense One reported, but didn’t disclose the report’s content. She did say that when they looked at bases for each branch and compared the data to national averages, which found low engagement on most bases, but some branches show higher engagement levels with anti-Black extremism or anti-Semitic conspiracy theories. She said the data didn’t show “really heightened levels of engagement that are incredibly worrying.”