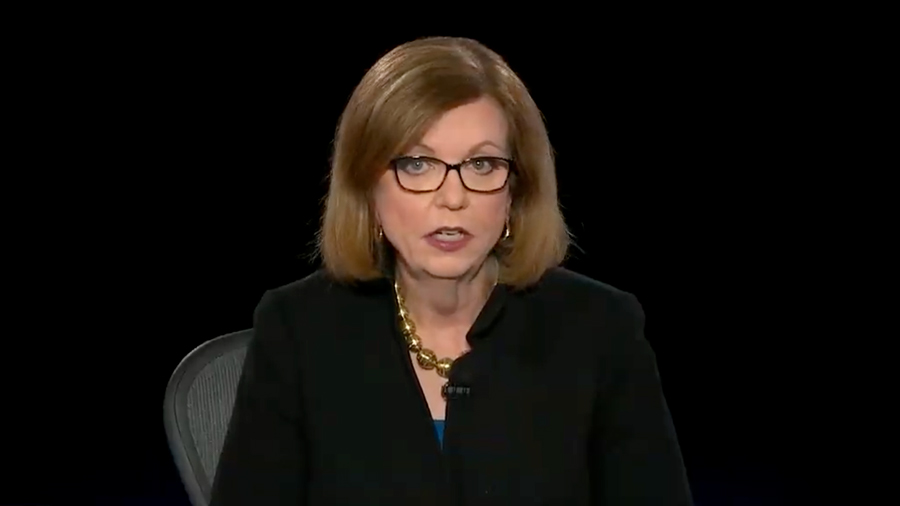 The conventional wisdom is that Susan Page was a fair moderator of the vice presidential debate. She wasn’t, but Vice President Mike Pence won anyway.

Permit a sampling. In her COVID-19 question to Sen. Kamala Harris, Page stressed how much worse the virus is getting (debatable), which was an implied indictment of Trump’s management of it. In her question to Pence, she charged that the U.S. death toll is proportionately higher than that of almost every other wealthy nation. Now, some will say this is no big deal, but an impartial moderator would offer no such editorial comments in either question and would instead invite Harris to comment on Trump’s handling of it and how Biden would handle it differently. She would not suggest Trump has mismanaged the virus but ask Pence if he believes the administration has managed it well, and why.

Page accused Trump of conducting a “super-spreader event” in the Rose Garden without social distancing or masks and accusatorily asked Pence how he could expect Americans to follow safety guidelines when Trump didn’t. It is not her job to attack. That is the debater’s prerogative. She might fairly ask that question in an interview, but not a debate.

On the question of presidential disability, Page opined that voters were concerned over presidential disability because of the candidates’ ages and said that this concern was sharpened because of Trump’s recent bout with COVID. She didn’t mention the extraordinarily humongous elephant in the room — Joe Biden’s mental decline — even though Trump’s COVID issue will most likely be short-term and Biden’s will almost certainly progressively degenerate.

The media’s glaring omission of Biden’s dementia throughout the course of this campaign, and again during this debate, underscores their obscene bias and cynical disregard for the very issue Page raised in this question: presidential disability. Besides, there are already constitutional procedures in place for presidential succession, so please give us a break from your feigned concern, madam.

Page’s next infraction was particularly egregious, as she accused “Trump’s doctors” of giving “misleading answers” to questions about his health, further pushing the media narrative that all human beings in Trump’s orbit, including distinguished physicians at Walter Reed hospital, are tainted, and that these doctors are hiding something for some sinister purpose.

Page misleadingly framed her question about the economy in the worst possible light for Trump, emphasizing that 11 million jobs lost this year have not been replaced and adding the zinger that Latinos, blacks and women were hit hardest. She didn’t mention how Trump’s pre-COVID economy was spectacular or that these very minorities benefitted in particular. Nor did she mention that the current recovery is extraordinary, especially given the Democrats’ efforts to perpetuate lockdowns. If she must editorialize, then let’s have both sides.

When she directed the economy question to Pence, she gratuitously editorialized that Trump had predicted a rapid recovery, “but the latest economic report shows that’s not happening.” She presented this highly debatable assertion as indisputable fact. She shouldn’t have injected herself at all, but since she did, she should have been neutral — not an ally of the Biden-Harris ticket.

On “climate change,” Page noted that there have been increasing hurricanes in the South and record-setting wildfires in the west, before loading her question with the assumption that “man-made climate change” has caused both. These claims are ludicrous, in my opinion. But that’s not the point, which is that it is not her job to make such assertions.

Her real purpose in so framing the question was to trap Pence into rejecting the conventional wisdom of climate change in an effort to make him look like a science denier. In a follow-up, Page directly asked Pence whether he regards climate change as an existential threat. She might as well have said, “Well, do you, rube?” Note that she didn’t ask Harris whether she believes in gender science or accepts the leftist pap that there are 71 genders.

While Page deserves credit for pointing out the inconsistency between Harris’ and Biden’s attempt to distance themselves from the Green New Deal and their support for it on their website, she didn’t ask Harris any pointed questions about the quixotic provisions this program includes, its prohibitive costs and the undeniable truth that even if we were to implement all of its mandates, we wouldn’t appreciably change global temperature by the end of this century.

The Deck Was Stacked, But…

Space limitations preclude further examples. But let me say that despite the deck being stacked against him, Pence managed to parry the accusations and keep the debate focused on substantive issues. He specifically contrasted Biden’s agenda with Trump’s agenda and Trump’s record.

I disagree with the pundit consensus that this debate will make no difference. Pence focused the nation’s attention on Biden’s horrific plans for America, which is critical for a Trump victory. The media studiously shields Biden’s agenda, and it was incalculably beneficial for Pence to highlight it. President Trump can build on this in the next debate. The more people exposed to Biden’s dangerous and cockamamie ideas, the greater Trump’s chances, which is precisely why Biden and Harris are hiding parts of their agenda and the media is abetting them.

Against 2-to-1 odds, Pence brought home a resounding victory.