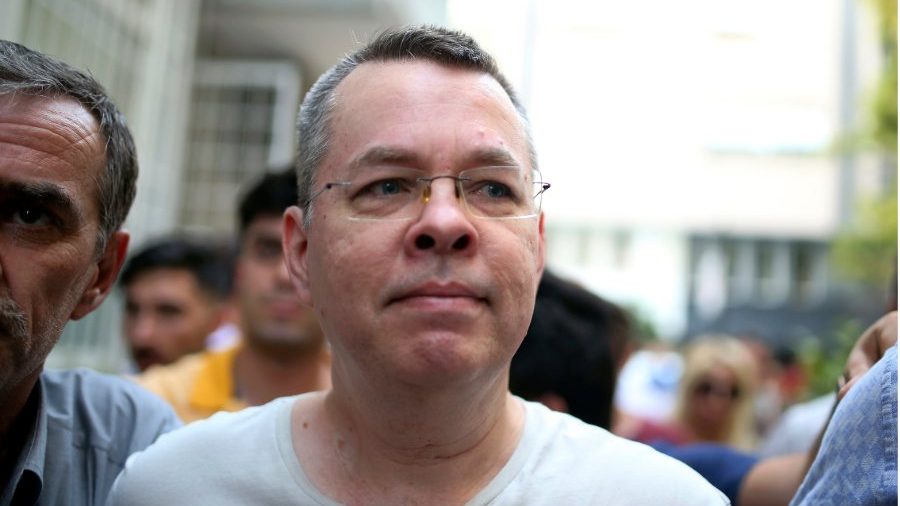 Andrew Brunson’s first stop en route to the U.S. after being freed from house arrest in Turkey was at Ramstein Air Base in Germany. There, Brunson, a pastor from North Carolina, was greeted by U.S. Ambassador Richard Grenell and a folded American flag.

Fresh off of the airplane and with his wife by his side, Brunson grabbed the flag and kissed it, as shown in an iconic photo that Grenell shared on Twitter.

I welcomed Pastor Brunson & his wife to Germany on their refueling stop. He’s almost home thanks to @realDonaldTrump.
When I presented him with the US flag, he immediately kissed it. #agratefulnation pic.twitter.com/b82gA7PXVr

Brunson had been in jail or on house arrest in Turkey for more than two years before his release. He was arrested in October 2016 and accused of aiding terrorists through a small Christian church that he and his wife, Norine Brunson, operated in the coastal city of Izmir.

The Brunsons had worked in Turkey for 23 years without incident until Andrew Brunson’s arrest.

Trump believed in July that he had a solid deal with Turkish President Recep Tayyip Erdogan to free Andrew Brunson, who was said to be in poor health while in jail. After Erdogan reneged on the deal, the Trump administration responded with a round of economic sanctions against the Turkish government.

Andrew Brunson’s court hearing on Friday was his first since the sanctions took effect.

At the hearing, four government witnesses recanted their testimony that Andrew Brunson was aiding terrorist organizations. In an apparent face-saving measure, the judge presiding over the case still convicted Andrew Brunson and slapped him with a three-year sentence. The judge also lifted a travel ban against Andrew Brunson, allowing him to leave Turkey.

After leaving Germany, Andrew Brunson will land at Andrews Air Force Base in Maryland on Saturday. He will meet with Trump at the White House around noon.

Turkey to Allow Pastor Andrew Brunson to Return to US