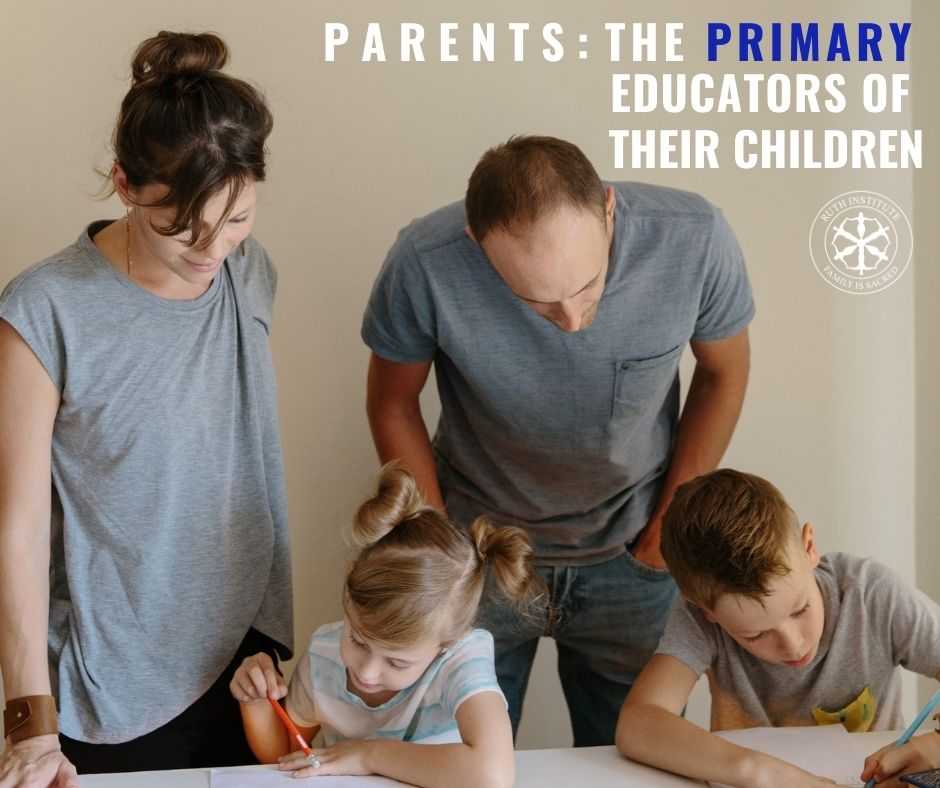 “Parents are the primary educators of their children,” said Ruth Institute President Dr. Jennifer Roback Morse, Ph.D. “Acceptance of this truth cuts across party lines, as well as religious, racial, and income barriers.”

“But no more,” Morse observed. “Now some politicians are so enamored of public schools pushing the Sexual Revolution that they’re telling parents to take a backseat. ‘You’re just along for the ride.’”

In a public debate, former Virginia governor (and current gubernatorial candidate) Terry McAuliffe stated, “I don’t think parents should be telling schools what they should teach.”

McAuliffe, who was once seen winning handily, is now in a dead-heat with the Republican candidate, who’s come out strongly for parental rights. The election is less than a week away.

Morse charged: “The education establishment doesn’t think these uppity parents have any right to oppose the sexualization of their children, transgenderism, and outright pornography in the schools.”

At a school committee meeting in Fairfax, VA, a member tried to shut off the microphone of a parent who read from a book promoting pedophilia, available in school libraries.

The mayor of Hudson, OH, told school board members to resign or be charged with distributing child pornography for the high school textbook, 642 Things to Write About, which asks students to “Write about the first time you had sex” and “Describe your favorite part of a man’s body.”

Morse explained: “The Sexual Revolution has come to dominate public education. Children are encouraged to choose their gender. Biological boys are allowed to participate in girls’ sports and use their showers and changing rooms.”

A parent in Loudoun Co., VA, says the school district tried to cover up the bathroom sexual assault of his daughter to protect its “transgender” policies.

“The worst of the lot, though, is the Biden Justice Department considering treating parents who are too outspoken at school committee meetings as ‘domestic terrorists,’” Morse said. “With that label slapped on them, concerned parents, ordinary decent people, could be prosecuted under the Patriot Act.”

“This is worse than a garden variety free speech issue. Politicos like McAuliffe seem to believe that families are supposed to pay for public education, surrender their children for indoctrination, and keep their mouths shut,” Morse declared.

“The Ruth Institute disagrees in the strongest possible terms. Parents are the primary educators of their children. The State is muscling in, far beyond its rights or its competence. This is tyranny, full stop.”

Michael Nazir-Ali, a prominent pro-life former Bishop of the Church of England, has become a Catholic and is preparing for ordination as a priest.

Ruth Institute Senior Research Associate Fr. Paul Sullins said: “We are pleased to welcome Bishop Michael Nazir-Ali into communion with the Bishop of Rome as he continues his own faith journey in Christ. What a wonderful confirmation of Pope Benedict’s wisdom in establishing the Personal Ordinariate of Our Lady of Walsingham to permit those formed in the vibrant liturgy and faith culture of Anglicanism to return home to the Catholic faith!”

“May God bless the future Fr. Nazir-Ali as he continues his outspoken defense of traditional Christian sexual ethics, and bless our brothers and sisters in the Anglican Church as they wrestle with the dilemma between conformity or confrontation with an increasingly secular culture,” Sullins said.

Nazir-Ali served as Anglican Bishop of Rochester, England from 1994 through 2009, and General Secretary of the Church Missionary Society from 1989 to 1994, as well as the bishop of Raiwind in his native Pakistan.

As an Anglican Bishop, Nazir-Ali was an outspoken defender of Christian teachings on life and the family and frequently accused the Church of England of “jumping on faddish bandwagons.”

He spoke of the “seriousness of the sin of abortion” and marriage between one man and one woman as the only “proper context for sexual expression, and that sexual relationships outside such an understanding of marriage fall short of God’s purposes.”

The Common Christian Heritage Under Attack

Ruth Institute President, Dr. Jennifer Roback Morse, Ph.D., added: “The Ruth Institute joins our colleague Fr. Paul Sullins, formerly an Anglican priest himself, in welcoming Bishop Nazir-Ali to the Roman Catholic Church. The Ruth Institute defends the ancient Christian teachings about marriage, family and human sexuality. These teachings are sometimes regarded as exclusively Catholic, even though they are the common heritage of the whole Judeo-Christian tradition. Today, the Roman Catholic Church, at least on paper, professes these teachings most consistently.”

“The Ruth Institute is an interfaith international coalition to defend the family and build a civilization of love,” Morse added. “We welcome Bishop Nazir-Ali, soon to be Father Nazir-Ali, and look forward to fruitful collaboration with him in defense of these same truths.”

Lies of the National Cancer Institute

In her work with the Breast Cancer Prevention Institute over the past 20 years, Dr. Lanfranchi has traveled nationally and internationally to Australia, New Zealand, Canada, Europe, China, Korea, India and South Africa, speaking at medical schools, hospitals, universities, cancer organizations, local and national governmental bodies and the United Nations about breast cancer risks, including its association with induced abortion and hormonal contraceptives.

Watch this interview to learn what typical doctors and the mass media will not tell you: the “care-free,” “risk-free” lifestyle of the Sexual Revolution is seriously harming and even killing women. Yet, in Lanfranchi’s experience, scientists don’t want to hear it. In fact, medical conferences won’t even allow Abortion-Breast Cancer link advocates to speak or have exhibit tables because this issue is “too political.”

Watch to learn the results of Dr. Lanfranchi’s research, and more on how and why this research is suppressed.

The Ruth Institute is a global non-profit organization, leading an international interfaith coalition to defend the family and build a civilization of love. The Ruth Institute’s Founder and President, Dr. Jennifer Roback Morse, is the author of The Sexual State: How Elite Ideologies Are Destroying Lives and Love and Economics: It Takes a Family to Raise a Village. Subscribe to our newsletter to get all our latest news.