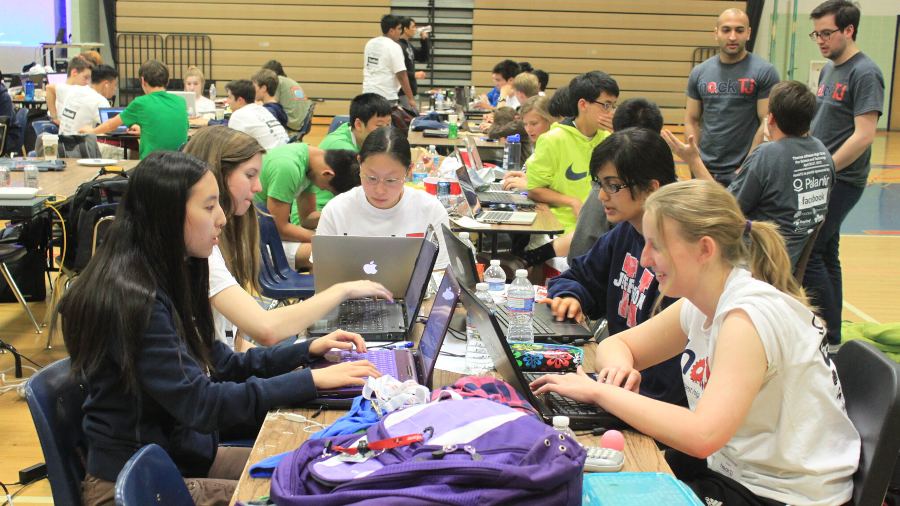 Students from Thomas Jefferson High School for Science and Technology participate in the school's Hackathon, April 27, 2013.

A parents group is claiming documents obtained in a lawsuit over admissions policies to an elite high school prove that a northern Virginia school board had a bias against students of Asian descent.

Purported discussions among members of the Fairfax County School Board mentioned “an anti asian feel underlying” the pursuit of changes to the admissions process for Thomas Jefferson High School for Science and Technology (TJHSST), according to emails, texts, and other documents published by Parents Defending Education (PDE). TJHSST is considered the No. 1 high school in the country by U.S. News and World Report.

“In fall 2020, Fairfax County, Va., school board members said the quiet part out loud,” PDE Vice President for Strategy & Investigations Asra Nomani, wrote in an article on Substack discussing the comments in the alleged discussions.

“It will whiten our schools and kick our [sic] Asians. How is that achieving the goals of diversity?” Fairfax County School Board member Stella Pekarsky texted to fellow board member Abrar Omeish, who responded with two exclamation points, according to PDE documents.

“I mean there has been an anti asian feel underlying some of this,” Omeish purportedly said in a follow-up text.

Pekarsky also criticized Fairfax County Public Schools Superintendent Scott Brabrand for claiming that a “pay-to-play” scheme was in effect, according to PDE.

“Before he went down this path, I told him to stop it and never talk about ‘pay to play, etc.’ It is very demeaning,” she texted Omeish, PDE’s documents show.

The school’s high proportion of Asian students drew criticism from some who felt Black and Hispanic students were underrepresented, according to documents released by PDE.

Nearly 85% opposed considering race in admission. A similar percentage, 80%, said they disagreed with trying to make the high school’s student body resemble the racial composition of Fairfax County in a survey of parents obtained by the Daily Caller News Foundation.

The survey showed that many parents favored continuing the admissions process in effect before 2021, which used a standardized test, but with greater outreach to Black and Hispanic students, with parents giving it an average score of 4.19 on a scale of 1 to 5, where 1 represented disliking and 5 represented liking.

“I saw the TJ admissions numbers after someone alerted me to an article a former TJ student wrote,” state Senator Scott Surovell wrote in a June 8, 2020, email to Karen Corbett Sanders, a member of the school board, that was contained in exhibits released by PDE. Surovell, a long-time critic of TJHSST’s pre-2021 admission policy according to local outlet the Vienna Connection, went on to point to language in a budget resolution.

Each of the 19 Governor’s schools were supposed to provide reports on meeting diversity goals set each year, Surovell’s email said, according to the PDE documents. The reports were to discuss “the racial/ethnic make-up and socioeconomic diversity of its students, faculty, and applicants.”

“What’s the plan? Feel free to call,” Surovell’s email concluded, according to PDE.

“Please be assured that I am as angry and disappointed in these numbers as you are. The previous board requested that the Superintendent bring to us a plan for addressing the equity in admissions issues for TJ,” Corbett Sanders replied.

The next week, Corbett Sanders discussed Surovell’s complaint with Brabrand.

“As you know the admissions data for the TJ class of 2024 is unacceptable, with less than 2% of the admitting class being Black, a decrease year over year.” Corbett Sanders said in a June 15, 2020, email to Brabrand.

“I know that you are in the process of considering how you will respond to the Legislature’s requirement to provide a diversity plan by October 1, 2020,” Corbett Sanders said in the email. “Can you make sure that the plan includes quantifiable measures, dates by which they will be achieved and information on how you will review the plan to make refinements as necessary?”

“The back and forth by the board members is damning, insulting and indicting of political corruption and self-admitted racism and incompetence. It’s a window into what so parents around the country endure from corrupt school board members who make a mockery of our precious democracy,” Nomani wrote.

The case, Coalition for TJ vs. Fairfax County School Board, will be heard Jan. 18 in the U.S. District Court for the Eastern District of Virginia. The Pacific Legal Foundation is representing the Coalition for TJ.