From Oval Office, Trump Says Border Wall Would Make Nation ‘Safer Than Ever Before’ 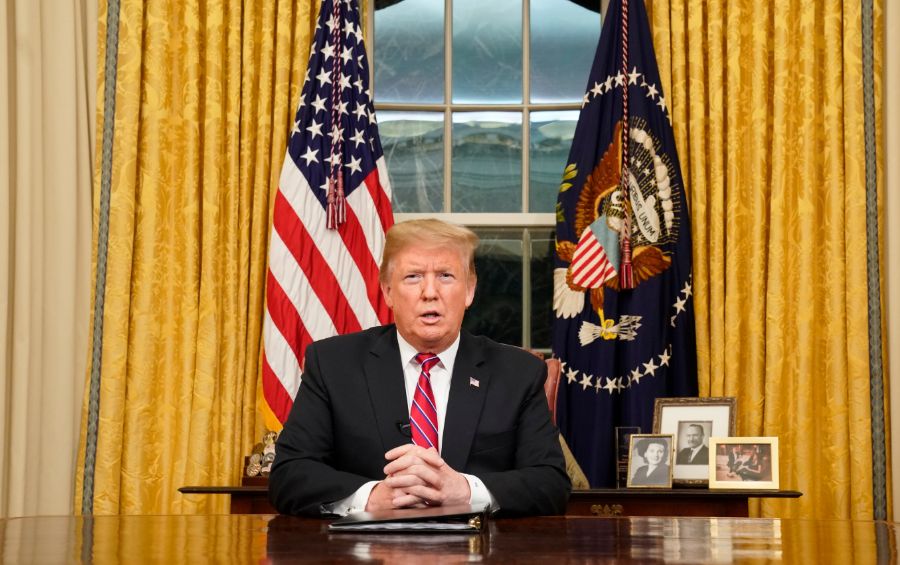 “This is the cycle of human suffering that I am determined to end,” President Donald Trump says in an address to the nation Tuesday night from the Oval Office.

President Donald Trump made an emotional plea Tuesday night for Congress to pass a border security package that includes funding for a steel wall, to minimize the number of victims of violent crimes committed by illegal immigrants.

His proposal for a steel wall and other border security measures would make America “safer than ever before,” Trump said.

‘The Cycle of Human Suffering’ Trump is Determined to End

“Over the last several years, I’ve met with dozens of families whose loved ones were stolen by illegal immigration,” Trump said during his first prime-time address from the Oval Office, which took place in the third week of a partial government shutdown over his insistence that Congress make good on past promises to build a barrier along the southern border.

“I’ve held the hands of the weeping mothers and embraced the grief-stricken fathers. So sad, so terrible,” Trump said. “I will never forget the pain in their eyes, the tremble in their voices, and the sadness gripping their souls.”

How much more American blood must be shed before Congress does its job? For those who refuse to compromise in the name of border security, I would ask: Imagine if it were your child, your husband, or your wife whose life was so cruelly shattered.

In his 10-minute address, Trump talked about the murder of a police officer and the rape and murder of an Air Force veteran, crimes that police said were committed by illegal immigrants in California. He also noted cases of illegal immigrants accused of murdering Americans in Georgia and Maryland.

“This is the cycle of human suffering that I am determined to end,” he said.

Trump is trying to reach a deal with congressional Democrats to secure funding for a border wall and fully reopen the government after the partial shutdown that began Dec. 22.

The president said he will hold his third meeting in a week with congressional leaders from both parties Wednesday at the White House. He is scheduled to travel to the southern border Thursday.

Trump noted that Senate Minority Leader Charles Schumer, D-N.Y., was among the Democrats who voted for the 2006 Secure Fence Act, legislation passed by Congress that called for more than 700 miles of fencing or other barriers along the border.

But Schumer and other Democrats now oppose the policy because he supports it, Trump said.

Trump’s Response to Pelosi’s Claim a Wall is ‘Immoral’

He also referred to comments from House Speaker Nancy Pelosi, D-Calif., who has called a border wall “immoral.”

“Some have suggested a barrier is immoral. Then why do wealthy politicians build walls, fences, and gates around their home?” Trump asked before answering his own question.

The president asked Congress for $5.7 billion for construction of a steel border wall. He also asked for funds for additional Border Patrol agents, immigration judges, and related resources.

Trump said that “thousands more lives will be lost if we don’t act right now.”

Congress has funded most of the government. The current shutdown affects only about 25 percent of the government, including the departments of Agriculture, Commerce, Justice, Homeland Security, State, and Transportation. The shutdown also affects about 800,000 federal employees, all of whom will get back pay when the impasse ends.

“The federal government remains shut down for one reason and one reason only,” Trump said. “Because Democrats will not fund border security.”

The president ended his speech by urging:

To every member of Congress: Pass a bill that ends this crisis. To every citizen: Call Congress and tell them to finally — after all of these decades — secure our border. This is a choice between right and wrong. Justice and injustice. This is about whether we fulfill our sacred duty to the American citizens we serve.

Minutes after the president finished speaking, the top Democrats in the House and Senate made their own televised argument to Americans in response.

“The president is rejecting bipartisan bills that would reopen government over his obsession with forcing American taxpayers to waste billions of dollars on an expensive and ineffective wall — a wall he always promised Mexico would pay for,” Pelosi said.

Pelosi said Democrats support infrastructure improvements at ports of entry and new technology to scan for drugs coming across the border.

“The women and children at the border are not a security threat, they are a humanitarian challenge, a challenge that President Trump’s own cruel and counterproductive policies have only deepened,” Pelosi said.

Schumer, standing beside Pelosi and speaking after her, accused Trump of using the Oval Office to “manufacture a crisis, stoke fear, and divert attention from the turmoil in his administration.”

“We don’t govern by temper tantrum,” the New York Democrat said. “President Trump has appealed to fear not facts, division not unity.”

Earlier in the day, the White House Office of Management and Budget announced that tax refund checks will be sent out despite the shutdown.

In his remarks, Trump referred to some of the statistics in a new report from the Department of Homeland Security.

According to the DHS report, from fiscal 2017 to fiscal 2018 officials posted a 73 percent increase in fentanyl, one of the deadliest drugs, confiscated at the southern border. That amounts to 2,400 pounds.

In fiscal 2018, which ended Sept. 30, Customs and Border Protection agents caught 17,000 adults at the southern border who had criminal records. They captured 3,755 known or suspected terrorists entering the U.S. in fiscal 2017.

Immigration and Customs Enforcement also apprehended 6,000 members of gangs, including the violent MS-13, at the border.

The report states that the past five years saw a 2,000 percent increase in asylum claims, yet 72 percent of migrants report making the journey for economic reasons, so they wouldn’t qualify for asylum.

The report says 60,000 unaccompanied children and 161,000 family units arrived in fiscal 2018. About 50 migrants per day are referred to medical providers.

Customs and Border Protection determined 31 percent of female migrants say they were sexually assaulted on the journey to the U.S.

Immigration courts have a backlog of nearly 800,000 cases and 98 percent of family units and unaccompanied alien children never are removed from the country, the report says.

Make Your Speech on Your Own Turf, President Trump