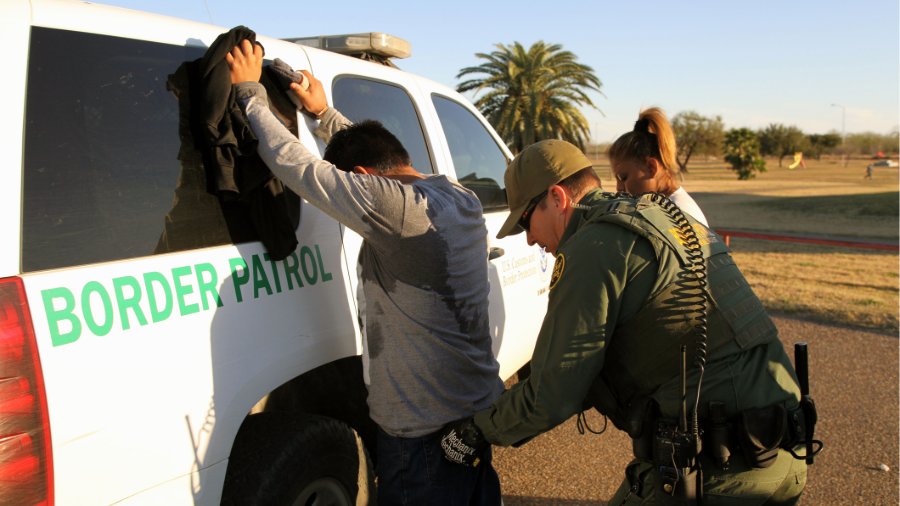 In this Feb. 9, 2016, file photo, a Border Patrol agent takes a Mexican man into custody for illegally entering the U.S. by crossing the Rio Grande River in south Texas.

The Immigration and Nationality Act mandates that all immigrants and refugees undergo a medical screening examination to determine whether they have an inadmissible health condition.

The Centers for Disease Control and Prevention has technical instructions for medical examination of prospective immigrants in their home countries before they are permitted to enter the U.S. They are screened for communicable and infectious diseases such as tuberculosis, malaria, hepatitis, polio, measles, mumps, and HIV. They are also tested for syphilis, gonorrhea, and other sexually transmitted diseases.

The CDC also has medical screening guidelines for refugees. These screenings are usually performed 30 to 90 days after refugees arrive in the United States.

But what about people who enter our country illegally? The CDC specifically cites the possibility of the cross-border movement of HIV, measles, pertussis, rubella, rabies, hepatitis A, influenza, tuberculosis, shigellosis, and syphilis.

Chris Cabrera, a Border Patrol agent in South Texas, warned: “What’s coming over into the U.S. could harm everyone. We are starting to see scabies, chickenpox, methicillin-resistant Staphylococcus aureus infections, and different viruses.”

Some of the youngsters illegally entering our country are known to be carrying lice and suffering from various illnesses. Because there have been no medical examinations of undocumented immigrants, we have no idea how many are carrying infectious diseases that might endanger American children when these immigrants enter schools across our nation.

According to the CDC, in most industrialized countries, the number of cases of tuberculosis and the number of deaths caused by TB steadily declined during the 100 years prior to the mid-1980s. Since the 80s, immigrants have reversed this downward trend in countries that have had substantial levels of immigration from areas where the disease is prevalent.

In 2002, the CDC said: “Today, the proportion of immigrants among persons reported as having TB exceeds 50 percent in several European countries, including Denmark, Israel, the Netherlands, Norway, Sweden, and Switzerland. A similar proportion has been predicted for the United States.”

The number of active TB cases among American-born citizens declined from an estimated 17,725 in 1986 to 3,201 in 2015. That was an 80 percent drop. Data reported to the National Tuberculosis Surveillance System show that the TB incidence among foreign-born people in the United States (15.1 cases per 100,000) is approximately 13 times the incidence among U.S.-born people (1.2 cases per 100,000).

Those statistics refer to immigrants who are legally in the U.S. There is no way for us to know the incidence of tuberculosis and other diseases carried by those who are in our country illegally and hence not subject to medical examination.

By the way, in the late 19th century and early 20th century, when masses of European immigrants were trying to enter our country, those with dangerous diseases were turned back from Ellis Island. Americans hadn’t “progressed” to the point of thinking that anyone in the world has a legal right to live in America. Neither did they think that it was cruel or racist to take measures to prevent our fellow Americans from catching diseases from foreigners.

But aside from diseases, there is the greater threat of welcoming to our shores people who have utter contempt for Western values and want to import anti-Western values to our country, such as genital mutilation, honor killings, and the oppression of women.

Many libertarian types make the argument that we would benefit from open borders when it comes to both people and goods. That vision ignores the important fact that when we import, say, tomatoes from Mexico, as opposed to people, to the U.S., they are not going to demand that we supply them with welfare benefits.

The bottom line is that we Americans have a right to decide who enters our country and under what conditions. If we forgo that right, we cease to be a sovereign nation. But that may not be important to some Americans.