The plan would simply waste money, create zero jobs on net, and do nothing to mitigate climate change. 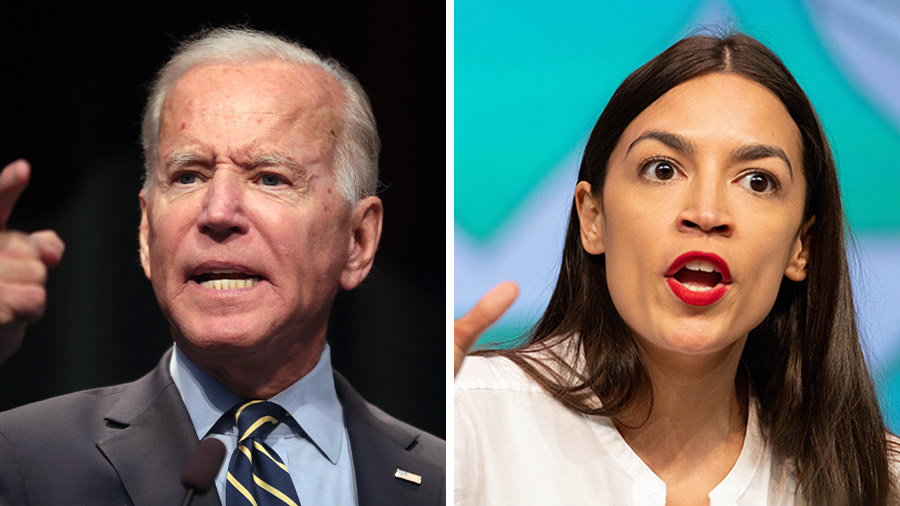 The fate of President Biden’s multi-trillion-dollar social spending agenda, the “Build Back Better” plan, has consumed the political conversation in recent weeks. Amid all the furious attempts at reading political tea leaves, a curious fact has flown under the radar: The latest iteration of Biden’s plan includes one of Rep. Alexandria Ocasio-Cortez’s worst ideas.

“Happy to announce creation of a U.S. Civilian Climate Corps is now in the Build Back Better Act,” the far-left congresswoman recently tweeted. Referencing the public works “job creation” scheme first proposed as part of the Green New Deal, Ocasio-Cortez claimed the initiative will create 300,000 jobs while combating the “climate crisis” and “environmental injustice.”

Happy to announce creation of a US Civilian Climate Corps is now in the Build Back Better Act.🌎

We 1st outlined the vision for it here: pic.twitter.com/i1K2E1TIHg

Indeed, a perusal of White House communications makes it clear that the plan for a Civilian Climate Corps — not long ago considered a radical pipe dream — is now part of the president’s plan.

“The Build Back Better Framework will create a Civilian Climate Corps with over 300K members that look like America,” the official White House Twitter account wrote. “This workforce will conserve public lands, bolster community resilience, address the changing climate, and put good-paying union jobs within reach for more people.”

If a Civilian Climate Corps wastes billions, creates zero jobs, and doesn’t even help the climate, why on Earth has President Biden included it in his spending agenda?

“Climate change has become a climate crisis,” Vice President Kamala Harris similarly said in a speech promoting the plan. “But today we know that this moment of crisis is also a moment of opportunity … an opportunity to create good, union jobs.”

“Once these bills are passed … young people will join our new Civilian Climate Corps,” she continued. “These are the opportunities we have within our grasp right now.”

.@VP Kamala Harris: "Once these bills are passed, plumbers will fill the jobs we need to replace all those lead pipes. Young people will join our new Civilian Climate Corps. These are the opportunities we have within our grasp right now." pic.twitter.com/qwAOYTQXHD

The Build Back Better Framework will create a Civilian Climate Corps with over 300K members that look like America. This workforce will conserve public lands, bolster community resilience, address the changing climate, and put good-paying union jobs within reach for more people.

Surrender Your Earnings to the State

With the proposal gaining momentum in Washington, DC, it’s well worth examining its actual merits. And even a cursory glance reveals that in reality the plan would simply waste money, create zero jobs on net, and do nothing to mitigate climate change.

According to Fox News, the latest bill text allocates $8 billion in taxpayer funds for this Civilian Climate Corps initiative. That’s a sizable sum that could be spent elsewhere — or better yet, left in our pockets to begin with. Yet under the Biden-AOC plan, the federal government would use that $8 billion to create well-paying jobs for young people who want to be employed full-time doing environmental activism and community projects.

Yet the claim that this would “create” jobs is false, at least on net. Sure, it would “create” some jobs in this new Climate Corps. But the government cannot create resources out of thin air. Whatever money it spent to put these climate change activists to “work” would have to, directly or indirectly, come from elsewhere in the economy.

As Henry Hazlitt wrote in Economics in One Lesson,

It is highly improbable that the projects thought up by the bureaucrats will provide the same net addition to wealth and welfare, per dollar expended, as would have been provided by the taxpayers themselves, if they had been individually permitted to buy or have made what they themselves wanted, instead of being forced to surrender part of their earnings to the state.

Simply put, a dollar spent paying a 19-year-old to plant flowers is a dollar not spent by a private company paying them to deliver food, and so on. So, there’s no reason at all to believe a Civilian Climate Corps would create jobs on net.

Make-Work Schemes With No Noticeable Impact on the Climate

Perhaps most damning, the Civilian Climate Corps would make a statistically negligible difference in reducing U.S. carbon emissions, the stated goal of the Biden administration’s plans. Even halting all U.S. vehicle emissions would barely make a dent in global emission levels, and make-work schemes like this would have no noticeable impact, simply as a matter of scale. Even many supporters of the idea acknowledge this.

“Emissions reduction, obviously, is the goal we need to achieve for the sake of safety,” Democratic Senator Sheldon Whitehouse said. “To be clear, I support a Civilian Climate Corps. It just doesn’t measurably reduce emissions.”

So, if a Civilian Climate Corps wastes billions, creates zero jobs, and doesn’t even help the climate, why on Earth has President Biden included it in his spending agenda? Whatever his reasons, wasting $10 billion on AOC’s fever dreams is a raw deal for American taxpayers.