Obama’s Profiles in Courage Award is an Empty Symbol

Awards once meant something. Now we value celebrity over achievement. 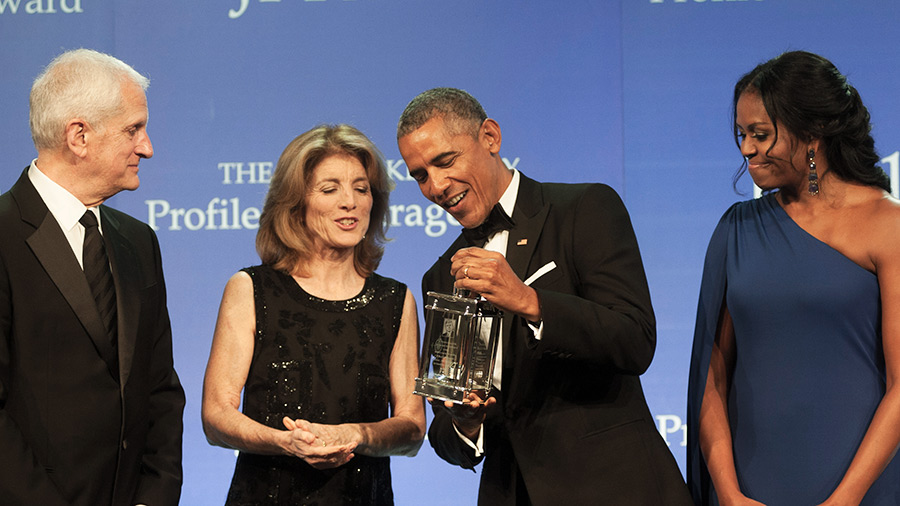 Awards once meant something. There was a time not that long ago when they were given in recognition of important accomplishments. Today, we tend to value celebrity over steady achievement. Fame is paramount. It matters little how one attains it. The Kardashians are just one of many examples.

We now give “participation” awards to schoolchildren so they won’t feel left out, or suffer injury to their “self-esteem,” should they be on a losing team.

Other awards have become politicized. Isn’t that why Oscars and Emmys are awarded to people, films and programs that reinforce the secular-progressive worldview? Isn’t that why Moonlight with its African-American characters and a gay theme won Best Picture this year over the delightful and uplifting La La Land?

With only a few exceptions, the Pulitzer Prizes in journalism go to mostly liberal and secular writers (Wall Street Journal columnist Peggy Noonan was a notable exception this year).

Obama’s entire life has been about doing what was politically expedient.

Profiles, a collection of stories about courageous people, won the Pulitzer Prize in 1957. Make what you will of how “courageous” it was that Kennedy didn’t write it. According to one account, he “provided the theme and supervised its production.” This is like an orchestra conductor taking credit for Beethoven’s 5th.

In his remarks, Obama defended the Affordable Care Act, his signature legislative achievement, which quickly became known as Obamacare. Though it is failing nearly everywhere as insurance companies pull out of the exchanges and premiums continue to rise, the former president asked Congress to be courageous and not repeal it.

“I hope they understand that courage means not simply doing what’s politically expedient, but doing what, deep in our hearts, we know is right.”

That line made me laugh. Obama’s entire life has been about doing what was politically expedient. Anyone who reads — or just reads the reviews — of David J. Garrow’s massive biography of the 44th president titled Rising Star: The Making of Barack Obama, will find that even mundane and personal decisions were planned in ways to advance his career and achieve his eventual goal of becoming president.

These decisions included his relationships with women. According to Garrow, Obama fell in love and moved in with a white woman named Sheila Miyoshi Jager, now a professor at Oberlin College. Though he proposed marriage to her, Jager tells Garrow that Obama thought marrying a white woman would not be politically expedient because it would not sit well with the African-American community. So he began dating Michelle Robinson, even while continuing to see Jager for a time. Obama and Robinson subsequently married.

Garrow also writes that Obama’s embrace of Christianity, which included his public display of carrying a Bible to the surprise of friends who never considered him “religious,” was designed to appeal to that demographic. It is why he joined Rev. Jeremiah Wright’s church in Chicago where the controversial pastor often gave anti-Semitic, anti-white and anti-American sermons. And why while running for president in 2007 candidate Obama tried to distance himself from Wright by saying, “We don’t agree on everything. … Reverend Wright … often expresses himself in that language of concern with institutional racism and the struggles the African-American community has gone through. … I tend to look at them through the context of social justice and inequality.”

We Know the Truth: To Renew Our Witness and Make Christianity Counter-Cultural Again, Part 2