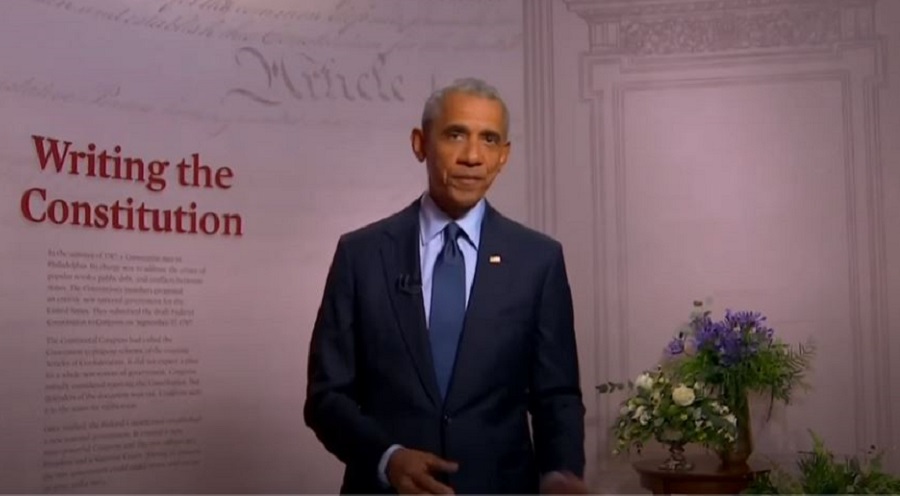 I urge those who still indulge the fiction that former President Barack Obama is a uniter and great statesman to read the transcript of his Democratic convention speech with an open mind and discerning eye.

Obama proudly violated the long-practiced rule that former presidents shouldn’t attack sitting ones. But he’s Obama, exempt from the rules, and he was attacking President Donald Trump, whom the left considers fair game for any smear anytime anywhere, no matter how deceitful and malicious.

Obama was petty, personal, dishonest and strikingly divisive while pretending to call for unity. He showcased the very qualities for which he torched Trump.

To address every objectionable aspect of this speech would require a full book chapter, so let me just highlight some of its most noxious parts.

I did hope, for the sake of our country, that Donald Trump might show some interest in taking the job seriously, that he might come to feel the weight of the office and discover some reverence for the democracy that had been placed in his care. But he never did. For close to four years now, he’s shown no interest in putting in the work, no interest in finding common ground, no interest in using the awesome power of his office to help anyone but himself and his friends, no interest in treating the presidency as anything but one more reality show that he can use to get the attention he craves. Donald Trump hasn’t grown into the job because he can’t. And the consequences of that failure are severe: 170,000 Americans dead, millions of jobs gone while those at the top take in more than ever, our worst impulses unleashed, our proud reputation around the world badly diminished and our democratic institutions threatened like never before.

Projection, anyone? In every single sentence.

I honestly don’t know how even the most rabid Trump haters can deny he takes the job seriously, even if he occasionally gets in the mud with his detractors. He clearly recognizes the gravity of the presidency and reveres our system, which happens to not be a democracy but a constitutional republic.

Obama is confusing President Trump with himself. Trump is nothing if not an energizer bunny, tirelessly working to advance his pro-America agenda. Every day, he demonstrates his love for the United States and his commitment to ensure that it remains the world’s greatest nation.

No, Mr. Obama, you and your party are the ones assaulting our system, while Trump is trying to protect it. He is the immovable force on our side standing in your way, and, boy, do you and yours loathe him for it.

Trump is committed to appointing judges who will preserve our constitutional system, instead of exercising the wicked prerogative of dismantling it through judicial legislation. He further seeks to uphold the integrity of “our democracy” by safeguarding the integrity of our voting process and opposing myriad Democratic efforts to thwart it — plans to undermine the Electoral College; stack the Supreme Court; block voter ID measures; lower the voting age to 16; and push schemes to transfer power from duly elected congressmen to an unelected, unaccountable, power-mad administrative state.

Obama’s criticism of Trump for showing “no interest in finding common ground” is a bad-faith cliche. Progressives like Obama routinely accuse conservatives of divisiveness without proof, assuming the charge will stick because they’ve long categorically demonized us as bigots. But, in fact, Trump has repeatedly reached across the aisle and only abandoned his efforts when Sen. Chuck Schumer and House Speaker Nancy Pelosi consistently snubbed him and blocked almost all bipartisan initiatives he proposed, including those they had earlier embraced, such as a border wall. They even obstructed a COVID relief stimulus package to keep Trump from getting any credit.

Sadly, Obama is the one who drives an ongoing wedge between groups of Americans on the basis of identity. Trump has not only appealed to all Americans and specifically to minorities; his policies, in stark contrast with Obama’s, have dramatically improved their economic circumstances. Shouldn’t those real results matter far more than inflammatory, condescending rhetoric aimed at perpetuating an atmosphere of minority victimhood?

Obama and his fellow travelers have no proof that Trump is using the power of his office to enrich himself, unlike some in Obama’s orbit. They simply throw charges against the wall, and the media piles on to complete the libel, never providing evidence — only vicious, unsubstantiated innuendo.

If all this weren’t audacious enough, Obama also blamed Trump for every single COVID death — as if heads of state can eradicate the coronavirus with a magic wand or cruise missile. To the contrary, Trump has been on this problem from the beginning, and we must emphasize that he has rigorously followed the advice of his medical team, Democratic sweethearts Drs. Anthony Fauci and Deborah Birx. Critics can’t have it both ways. If Trump was wrong, they were wrong. Also, beyond mostly following their medical advice, Trump aggressively tackled COVID at the federal level, utilizing his private-sector executive expertise to design a plan to postpone the spread of the virus; and marshaling public and private resources to develop testing and fast-track the development of vaccines and therapeutic treatments.

Obama’s most surreal claim was that Trump has caused the economic problems brought on by the virus. From the start, Trump has been urging America to get back to work, while Obama’s party has fought to keep America locked down.

On top of all this, Mr. Obama, President Trump has rescued this nation from your lead-from-behind foreign policy and restored us to a position of respect in the world.

Poor taste or not, Obama certainly has the right to use his undeserved stature to excoriate President Trump, but many of us would appreciate it if he didn’t insult us by masquerading as bipartisan in the process.