It is as if God Himself wanted to warn us in the most unmistakable way that Western Christianity is burning — and with it, Western civilization. 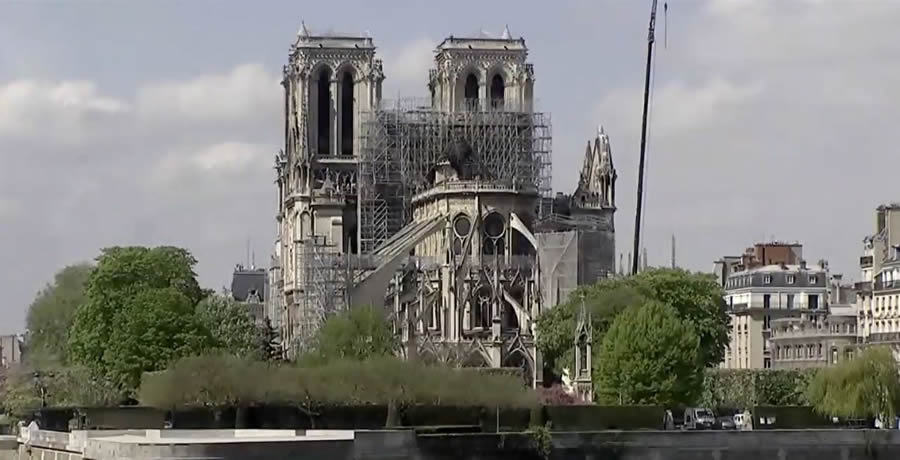 The symbolism of the burning of Notre Dame Cathedral, the most renowned building in Western civilization, the iconic symbol of Western Christendom, is hard to miss.

It is as if God Himself wanted to warn us in the most unmistakable way that Western Christianity is burning — and with it, Western civilization.

Every major Western (and one major non-Western) social and intellectual force has conspired to rid Europe of Christianity and the civilization it produced.

Within the Western world, the French Enlightenment — the intellectual basis of the French Revolution and the modern West — sought to replace Christianity, and religion in general, with secularism rooted in reason. No God, Bible or Ten Commandments is necessary for morality or meaning: reason (and science) will replace them.

The two final deathblows to Christianity in Europe were the world wars. World War I ended most Westerners’ belief in the nation-state and the West. Christianity, already weakened by the Enlightenment, was further weakened by World War I. German Christians were killing millions of French and English Christians, and French and English Christians were killing millions of German Christians. So the argument and sentiment against Christianity went. Then World War II saw even more death on the Christian continent as well as the failure of Catholic and Protestant churches in Nazi Germany to offer even minimal noncompliance with the Nazis’ Jew-hatred.

With the end of World War II, every internal Western intellectual doctrine was secular. God, the Bible and religion were regarded at best as innocuous nonsense and at worst as noxious nonsense.

Meanwhile, Europeans brought a non-European ideology into Europe, an ideology that, for more than a thousand years, sought to replace Christianity as the world’s dominant religion. The Europeans, believing in nothing distinctly Christian or Western and believing in the moral and intellectual nonsense known as “multiculturalism” — a doctrine that asserts that all cultures are morally equivalent — saw nothing problematic in bringing millions of Muslims into Europe. They had no idea that most of these people actually wanted to replace Christianity with their religion. They had no idea because, in their ignorance and arrogance, they assumed that because they were secular multiculturalists, everybody else was, too — or would be, once they lived in Europe.

The End of Christianity and the West

They were wrong, of course. And as a result, the two dominant forces in Europe — secular leftism and Islamism — sought the end of Christianity and the West. (The left believes that protecting Western civilization is equivalent to protecting white supremacy.)

This is not producing a pretty picture. Generally speaking, Islam has not been nearly as kind, tolerant, open, medically or scientifically innovative or intellectually curious as Western civilization (and yes, Nazism and communism were born in the West, but they were anti-Western).

Even without tens of millions of Muslims, post-Christian Europe has not produced a pretty picture. This was predicted in 1834, 100 years before Hitler’s rise, by the great German poet Heinrich Heine, a secular Jew (who later converted to Protestantism, “the ticket of admission into European culture”):

Christianity — and that is its greatest merit — has somewhat mitigated that brutal German love of war, but it could not destroy it. Should that subduing talisman, the cross, be shattered, the frenzied madness of the ancient warriors, that insane Berserk rage of which Nordic bards have spoken and sung so often, will once more burst into flame. This talisman (the cross) is fragile, and the day will come when it will collapse miserably. Then … a play will be performed in Germany which will make the French Revolution look like an innocent idyll.

European Christians persecuted European Jews, often brutally. But it took a post-Christian ideology, secular Nazism, to produce Auschwitz — just as it took post-Christian communism to produce the Gulag, the Chinese Cultural Revolution and the Ukrainian and Cambodian genocides.

Moreover, Nazism and communism aside, the left’s belief that secular reason can replace God and the Bible turns out to be completely wrong. The alleged citadels of secular reason — the universities — are the most irrational and morally confused institutions in the West.

I don’t know if a worker accident or a radical Muslim set fire to Notre Dame Cathedral (as they have scores of other churches around Europe). In terms of what the fire represented, it doesn’t much matter. What matters is the omen: Europe is burning, just as Notre Dame was.