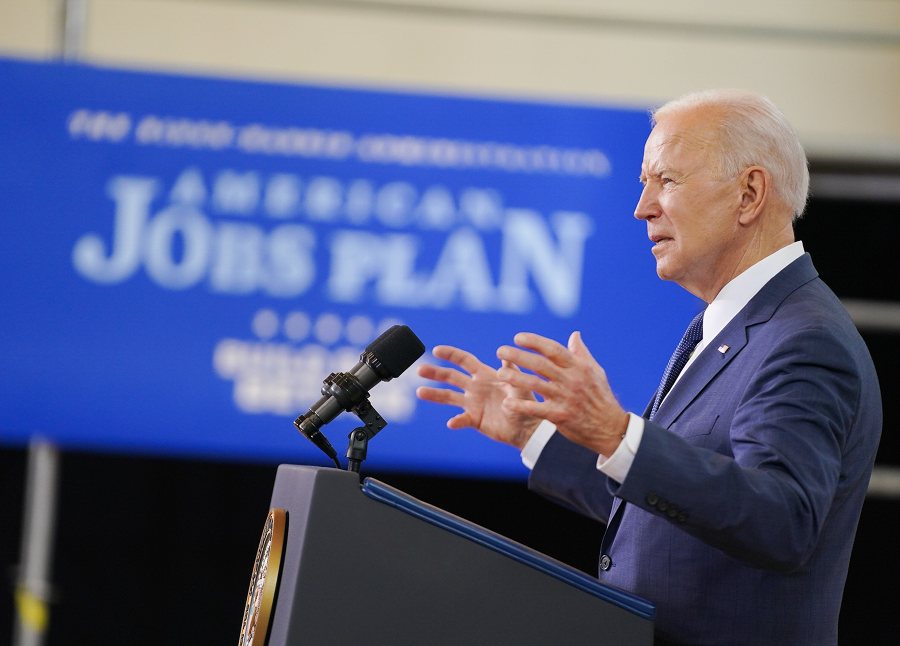 I wish I could say this was an April Fool’s Day joke, but no. Facing opposition to his $3 trillion “infrastructure bill,” President Biden yesterday unveiled a “scaled-down” $2.5 trillion version (half a trillion here, half a trillion there, and sooner or later, it adds up to real money.)

A Plan to Rebuild Government

Breitbart.com did a good job of listing the “top 45” (!) spending items in the “infrastructure” bill, and when you see some of them, you’ll understand why “infrastructure” is in quotation marks. If you think that word refers to things like roads, bridges and airports, guess again. I’m amazed Biden didn’t toss in $20 billion to winterize the windmills of your mind.

For instance, the bill would spend $174 billion to “win the electric vehicle market.” I’m not even sure what that means (and Toyota recently warned that if we all had electric cars, there would be nowhere near enough power generation capacity to charge them.) But I can tell you that it’s $59 billion more than the bill allocates to modernize roads, bridges and main streets that are most in need of repair. You know…“infrastructure.”

With this overstuffed bill, it would be cheaper to fill all our potholes with hundred dollar bills.

The Wall Street Journal noted that aside from the $115 billion for actual infrastructure repairs and some money for airports, the rest of the $620 billion earmarked for “transportation” is all “subsidies for green energy and payouts to unions for the jobs his climate regulation will kill.” They said this isn’t a bill to rebuild America, but to rebuild government back to bigger than it’s ever been.

There’s also $20 billion for a program that will “reconnect neighborhoods cut off by historic investments and ensure new projects increase opportunity, advance racial equity and environmental justice, and promote affordable access.” Sounds like something that will really keep the bridges from collapsing.

To save your eyes from crossing from reading the word “billion” over and over, here’s a shorter list of just some of the most outrageous items in the bill.

Biden claims this is all necessary because our infrastructure is “crumbling.” I wouldn’t deny that we need to shore up and modernize some of our infrastructure, and some items in the bill are reasonable, like replacing lead water pipes. But with this overstuffed bill, it would be cheaper to fill all our potholes with hundred dollar bills. A bill targeted at fixing what really needs it wouldn’t cost anywhere near $2.5 trillion. Fox News pointed out that a 2019 study by the National Bureau of Economic Research found that “most US transportation infrastructure is not deteriorating” and that “massive new expenditures” are not warranted by the evidence.

Biden is also attempting to justify the bill on grounds that it will create so many jobs. Stacey Lennox at PJ Media notes that Biden talks as if we’re in a Great Depression and need a massive government jobs program. In fact, the current unemployment rate is 6.2%. That’s 1.5 points lower than the 7.7% jobless rate we had in 2012 when Obama/Biden were reelected.

And AOC Wants to Spend More

Meanwhile, Rep. Alexandria Ocasio-Cortez (who thinks that “surges” and “insurgencies” are the same thing) is disappointed in Biden’s $2.5 trillion bill because she wants to spend $10 trillion, since money now falls from the heavens like rain in the spring or something.

In a related story, Victor Davis Hanson lists 10 radical new rules that are changing America, although since it’s impossible to change reality, they’re actually just heading us over a cliff. Note that #1 is “Money is a construct. It can be created from thin air. Annual deficits and aggregate national debt no longer matter much.”

The fact that our national debt is approaching $30 trillion and 110% of our entire GDP will never lead to the type of fiscal disaster that’s occurred in every other country that’s spent itself into unpayable debt. The Ivy League leftists pushing this idea may have paid no attention to any economics courses, but they’ve completely embraced the one lesson they’ve been told since the cradle: “You’re special.”