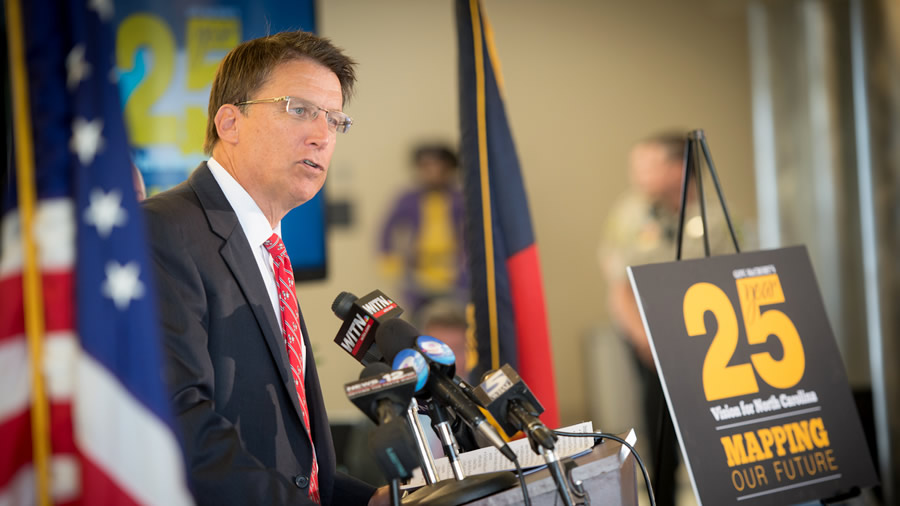 Gov. Pat McCrory speaking at a press event about his 25-Year Vision for North Carolina on September 17, 2014.

Charlotte’s city council passed an ordinance to take effect April 1 that would allow people to use the bathroom they say is their true gender, regardless of their biological gender. Supporters of the ordinance described it as an anti-discrimination bill that protects transgender people, but opponents said men would exploit it to legally use women’s restrooms and locker rooms. The bill signed Wednesday prevents local governments from enacting similar ordinances, WCNC reports.

“The basic expectation of privacy in the most personal of settings, a restroom or locker room, for each gender was violated by government overreach and intrusion by the mayor and city council of Charlotte,” McCrory said in a statement. “This radical breach of trust and security under the false argument of equal access not only impacts the citizens of Charlotte but people who come to Charlotte to work, visit or play. This new government regulation defies common sense and basic community norms by allowing, for example, a man to use a woman’s bathroom, shower or locker room.”

“Instead of solving any real problems, the law would create new ones and could lead to intolerable and unfair conditions for transgender students who are entitled, by federal law, to a safe and equitable education,” Tara Borello, a senior attorney at Lambda Legal, a group supporting the ordinance, told ABC11.

Caitlyn Jenner Tweeted her support of the bill, but it wasn’t enough.

Another day, another time for us to stand together!! Tell @PatMcCroryNC to stop this bill with the link below #NCGA https://t.co/tlIvnHvQvC

McCrory added that the city went beyond its “core responsibilities” of managing the city.

Ordinance defied common sense, allowing men to use women’s bathroom/locker room for instance. That’s why I signed bipartisan bill to stop it

A similar Houston battle threw the city into turmoil until the residents voted down the ordinance by a significant margin in November of last year.