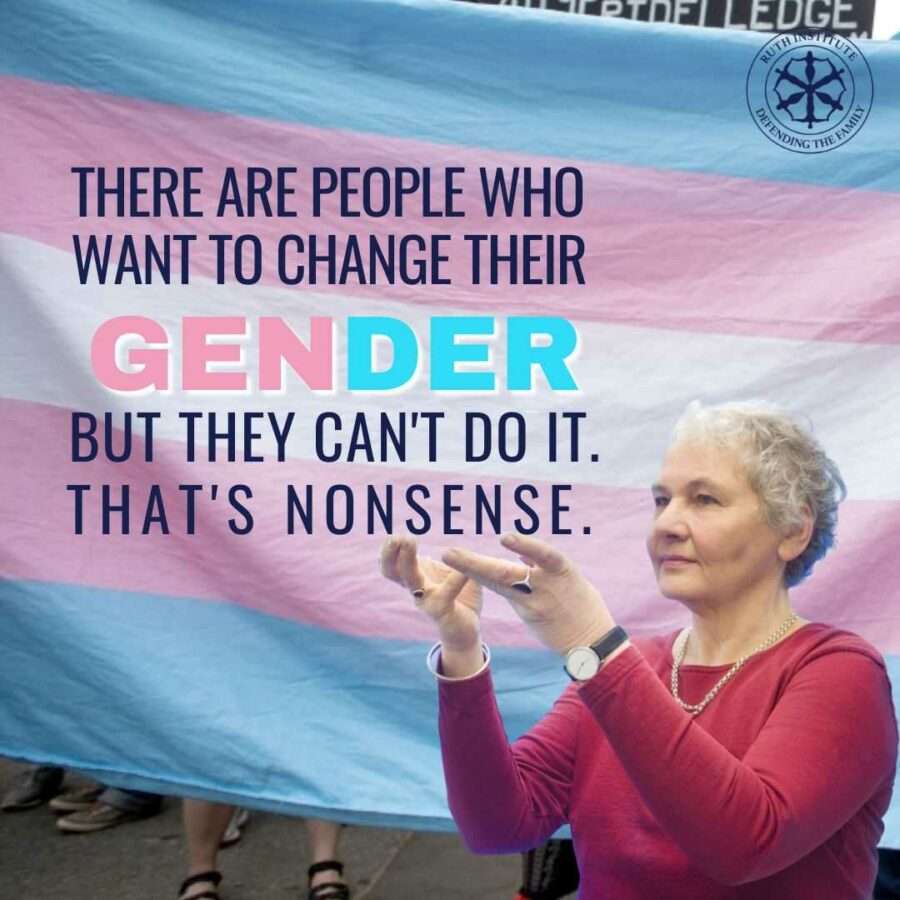 By The Ruth Institute Published on September 6, 2022 •

“There are people who want to change their gender, but they can’t do it,” Dr. Christiane Nusslein-Volhard, 1995 Nobel Prize winner in Physiology and Medicine for her research in early embryonic development, told German feminist magazine EMMA. The idea that people can change their gender is “nonsense. It’s wishful thinking. People retain their gender for life.”

Nusslein-Volhard also warned of the dangers of so-called gender transitioning with drugs and surgery. “The body cannot handle it in the long run. Every hormone you take has side effects. Taking hormones is inherently dangerous.”

Morse responded: “Increasingly, detransitioners are coming forward to tell their stories and warn of the physical and psychological dangers of what’s called gender-transitioning.”

“At a recent legislative hearing in Florida, a young woman described these effects of undergoing transgender surgery at age 15, including a double mastectomy, which will increase the risk of certain cancers and leave her unable to breastfeed, even if she can conceive and carry a child to term,” Morse explained.

“I wish this distinguished German biologist could talk some common sense to the U.S. medical associations that have endorsed this radical, life-altering course,” Morse said.

This week’s Dr. J Show guest is Cecily Routman, who founded the Jewish Pro-Life Foundation in 2006. “There was no Jewish voice [in the pro-life arena], and I wanted to provide one,” she said. “Also, there’s a high rate of abortion in the Jewish community. That’s such a tragic thing. We were undereducated and behind the curve in terms of pro-life information.”

Routman grew up thinking abortion was acceptable, but when she began researching the topic, she discovered there is no basis for supporting abortion within scripture or the Jewish holy book, the Torah. In reality, “Judaism was the first religion in history to ban child sacrifice and to sanctify human life from conception,” she said. For her website, she created a powerpoint called “Judaism: the original pro-life religion.”

Jews have assimilated into secular culture to the point of forgetting or not knowing what the Torah says. “We’re easily manipulated and exploited by these propagandists and opportunists. To say Judaism gives a right to kill unborn children is completely opposite what our original law said. Unfortunately, it’s very dangerous for some organizations to come out against abortion because they’ll lose their donors.”

“We need to speak for those who cannot speak for themselves and speak for our tradition that is pro-life and pro-baby.”

The Jewish Pro-Life Foundation provides information, pregnancy care, adoption referrals, and a healing program for Jewish men and women who suffer after abortion.

10-Year-Old “Trans” Model Reflects the Sickness of Our Times

A 10-year-old is being touted as the “world’s youngest trans model,” after he was paraded down a runway at a New York fashion show. “It’s both child abuse and a sign of the profound sickness of our times,” said Dr. Jennifer Roback Morse, Ph.D, President of the Ruth Institute.

“Noella” McMaher has been raised as a girl by his lesbian guardians since he was a toddler. They have announced that in the next few years, they will start puberty-blocking hormones and begin “gender-transitioning” surgery when he’s 16.

“What they’re talking about is mutilation,” said Morse. “The surgeries consist of removing healthy organs to give the patient the physical appearance of the opposite sex, but they can’t change Noella’s DNA. He was born a male and will remain one until the day he dies.”

“There’s one sex that produces the eggs and has two X chromosomes. That’s called female,” she patiently explained. “And there’s the other one that makes the sperm and has an X and a Y chromosome. That’s called male.”

Morse reflected: “It’s also called reality. Until ideology came to dominate science in this area, this was conventional wisdom. But to express such views today is branded ‘bigoted’ and ‘hateful’ by groups like the Southern Poverty Law Center.”

“But the Sexual Revolution is unable to stifle the voices of dissidents and detransitioners.”

Chloe Cole, a California teen who formerly identified as transgender, had a double mastectomy when she was 15. “I was unknowingly, physically cutting off my true self from my body, irreversibly and painfully,” Cole confessed.

Walt Heyer, who attempted to live as a woman for eight years, spoke at the Ruth Institute’s 5th Annual Summit for Survivors of the Sexual Revolution in June, telling his detransition story of rediscovering his true self. “Once the sperm hits the egg, it’s game over,” he said. “No one can change the sex of their body.”

“The Ruth Institute will continue to highlight these stories,” Morse promised. “We will not be censored. We will not be silenced.”

Faith Hakesley, on her “Ask a Survivor” blog, writes: “Those of you who follow me on social media are probably already aware that I gave birth to my husband’s and my fifth child at the end of July. Many people have pointed out that we have our hands full. We do. However, I also like to inform them that our hearts are even more full! You can imagine how chaotic things have been around our home. The reality is that life is different now and has been a bit more overwhelming than usual. Despite the big changes, I am trying to focus on all the positive little things especially during difficult moments.

I want to share with you some inspiration I got a little while back. It came to mind last week on a particularly difficult and exhausting day. An inspiring moment happened months ago and reminded me that little positive things can make a difference. Between a busy schedule, pregnancy, a sick toddler, and homeschooling, the week had been rough. I got out of bed that morning feeling completely unrefreshed. The night before had been a near sleepless one due to a cranky, sick toddler. That morning, I was determined to make the best of things. I decided to do something positive to help me along.

My little way of improving my outlook was to throw on a pair of small, gold hoop earrings. They weren’t anything special or fancy. Yet, they made me feel a little more put together. I somehow felt more like myself.

I didn’t think much of my earrings until one of my daughters saw me. She looked at me in amazement, clapped her hands over her face, and exclaimed with excitement, “Oh, Mama! You look so beautiful just like a princess! Are you going out somewhere?” Keep reading.