No Sign of Scientific Progress in the Middle Ages — Right? 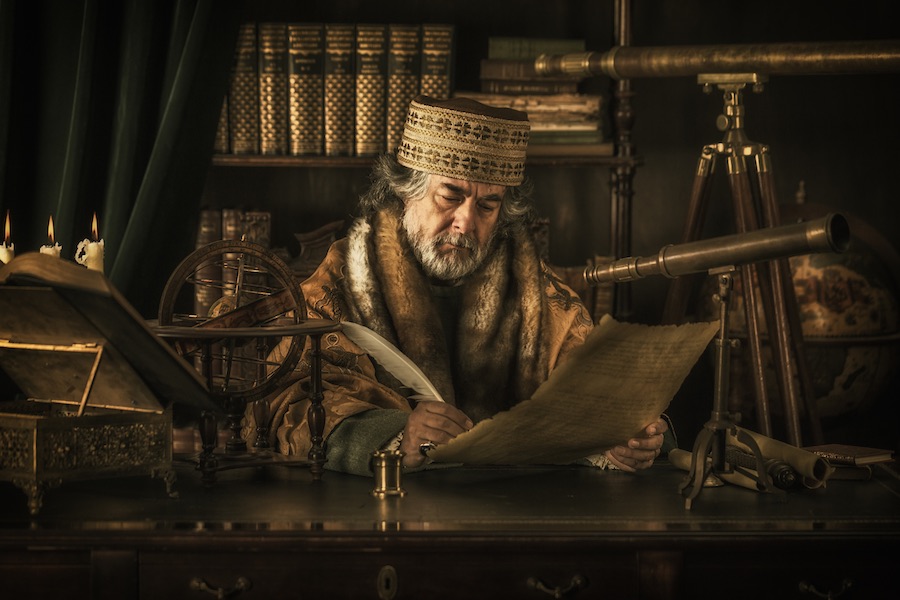 Have you heard this one? “There was no scientific progress in the Middles Ages. Religion suppressed knowledge, it was the Age of Unreason, and science was stalled until it finally shook free of the shackles of the Church.”

First, religion didn’t shut science down. An early Renaissance of sorts — or the first Scientific Revolution, if you like — was centered at the Cathedral of Chartres in the 12th century. As James Hannam explains, William of Conches did important work on nature and philosophy. Adelard of Bath made significant advances in mathematics. Important Greek and Arabic works were translated into Latin for current use.

When the more widely known Scientific Revolution got underway, it was led by clerics and other strongly committed believers. Copernicus, Galileo, Brahe, Kepler, and many, many more were dedicated Christians. And I haven’t even gone as far back as the Carolingian Renaissance. There’s just too much story to tell in one page.

Galileo is Not an Example of Religion Suppressing Science

But maybe you think the famous Galileo incident shows the Church standing in the way of science. Think again. Galileo never doubted the truth of Scripture. He did have a way of annoying the Pope, though, when the Pope was having enough trouble with the Reformation going on at the time. He put Galileo in house arrest, but it was more for politics than for science or theology.

But if you still think Galileo was an example of the Church against scientists, here’s my question for you: Let’s suppose for the sake of argument that you’re right, and Galileo is an example of that. Name another one. You won’t be able to.

In fact, there is no other example. If Galileo is an example, he’s an example of what one pope, Urban VIII, did to one scientist, Galileo. Nothing more. There was no pattern of church resisting science.

But how then do we explain the explosion in science since the Scientific Revolution? All the real science has happened since then. You never hear of anything before that!

Still not impressed? Maybe you’re thinking, “Look, if they’d really been doing science then, wouldn’t we have more sign of it, without having to dust off academic history books?”

No, not really. Consider the graph below, as a picture of how science has grown since the year 500. Looks believable enough, doesn’t it? You see how pretty much nothing happened until the 1600s, and then slowly, finally, it started ticking upward. During the 1700s, Boom! it took off, and now it’s growing like crazy. 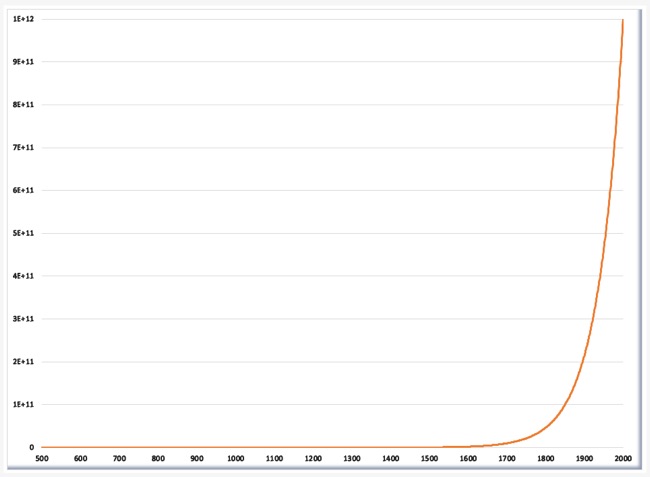 It’s a bit of a trick question, though. If that graph looks believable, then you’re ready to agree that science could have been growing at a constant rate, year after year, since the year 500. This is an exponential curve showing perfectly consistent growth at a rate of about 1.55% every year for 1500 years. (The chart uses imaginary “science knowledge units” of 100 in the year 500, and 1 trillion in the year 2000.)

The numbers obviously aren’t real, yet still they tell a story. Science could have been advancing at a perfectly steady rate since the fall of the Roman Empire, yet looking back at it from here, it would appear as if nothing whatsoever had happened during the entire first thousand years.

And even that picture is just a matter of timing. See below what happens if you cut the chart off at the year 1600 instead of 2000 and adjust the y-axis scale appropriately. People living then might have looked back and seen a “Scientific Revolution” around 1400 or so. And then again you could cut the chart off at the year 1400, and see a strong science surge in science a couple hundred years earlier. 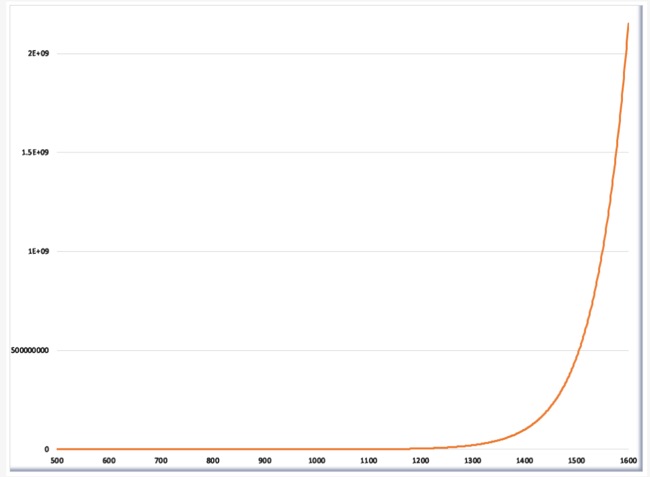 This is not meant to be a true picture of the history of science. Nothing proceeds at a constant year-by-year growth rate every year for 15 centuries! The point rather is to give perspective.

You could read Hannam’s book — which is quite a good read, by the way, and neither dusty nor dry — and learn some of the real progress science made in science from 500 to 1500 and beyond. Yet you might still think, “That’s nothing. They’re just pretending to call it science. Science was still stalled for centuries, compared to the real growth we’ve had lately.” Except now you see how that could be a simple error in perception instead.

The real story of science is a whole lot more interesting, going back a lot further in history, than you likely imagined. So is the story of the Church, including the further story of how the Church advanced science through all those crucial early years.

Adapted from work originally published at ThinkingChristian.net. Used by permission.