No Prosperity for Iran after Nuclear Deal 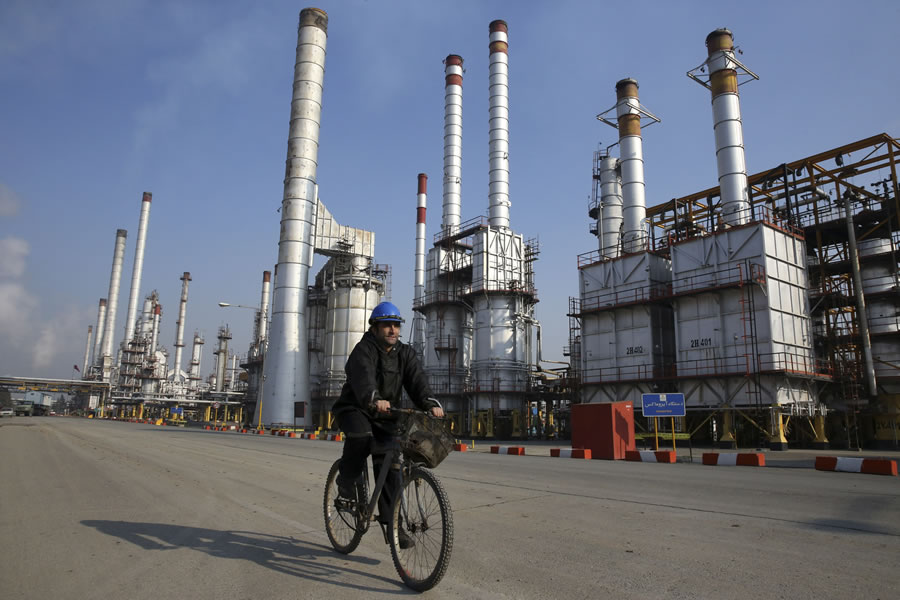 In this Dec. 22, 2014 file photo, an Iranian oil worker rides his bicycle at the Tehran's oil refinery south of the capital Tehran, Iran.

As a matter of arithmetic, Iran is flat broke at the prevailing price of hydrocarbons. Under the P5+1 nuclear deal, Iran will recoup somewhere between $55 and $150 billion of frozen assets, depending on whether one believes the Secretary of the US Treasury or one’s own eyes. The windfall is barely enough to tide Iran over for the next two years.

P5+1 nuclear diplomacy with Iran went forward on the premise that Iran would trade its strategic ambitions in the region for economic prosperity. The trouble is that prosperity is not a realistic outcome for Iran, which has nothing to gain by abandoning its strategic adventures.

Iran now exports 1.2 million barrels of oil a day. At $30 a barrel, that’s $14 billion a year (and perhaps a bit more, given that some Iranian light crude goes at a higher price). Iran also sold (as of 2014) about 9.6 billion cubic meters of natural gas, which might bring in another $4 billion at today’s market prices.

As of 2014, the Iranian government spent $63 billion a year, according to western estimates. No data is available for 2015, and the Iran Central Bank doesn’t publish data past mid-2013. That brought in a bit over $40 billion a year (not counting gas exports). Iran has a $40 billion hole to fill. Unfrozen assets will tide the country over for a couple of years, but won’t solve its problems. This year Iran plans to spend $89 billion, the government announced Dec. 22.

Iran’s government plans to raise taxes across the board, supposedly to decrease dependency on oil in the government budget. But tax revenues for the fiscal year starting March 2016 are estimated at only $28 billion. Even under the assumption that Iran can sell $22 billion worth of oil, the budget gap will rise to about $40 billion, or about 10% of GDP. In nominal dollar terms, Iran’s GDP shrank from $577 billion to $415 billion in 2014, and almost certainly shrank further in 2015.

None of the big projects now under discussion will move the needle far from the empty mark. The long-discussed Iran-Pakistan pipeline might produce revenues of about $3.5 billion a year under ideal conditions, and Iran would pocket a fraction of that.

In December, Iran said that it hoped to increase oil production by 500,000 barrels, earning $22 billion a year, a 50% increase from its present rate. But on Jan. 16, Iran’s oil minister Bijan Zaganeh told an incredulous CNN interviewer that it would boost oil output by 1.6 million barrels a day by the end of 2016. Most experts believe that Iran can’t pump that much oil if it wanted to, and if it did, it couldn’t sell it if it tried.

There are a lot of countries who need to sell more oil, notably Russia. Russia’s oil exports to China now exceed Saudi Arabia’s. China has good reasons to buy more from Russia, given the convergence of Russian and Chinese strategic objectives in Syria and elsewhere. China clearly wants to improve relations with Iran. President Xi Jinping’s Jan. 23 visit to Tehran featured an agreement to increase trade by $600 billion over the next ten years. The question is not whether China wants to trade with Iran, but whether Iran can pay for it. Like Russia, China fears the expansion of radical Sunni Islam in the region, with the potential to spill over into China’s Western province of Xinjiang. There are no Shia Muslims in Russia or China, and Iran’s sponsorship of Shia jihadists is of little concern to the two Asian powers.

It seems unlikely that China would shift oil purchases away from Russia to Iran in order to help the Tehran regime. China will invest in Iranian extraction, petrochemicals and infrastructure, but even the most optimistic projections won’t do much for Iran’s finances.

Unless oil prices rise sharply, Iran’s windfall from the P5+1 deal will cover two years’ worth of deficits, with little left over for urgently-needed maintenance of existing oil and gas capacity. That may explain why the Tehran regime has played down the importance of the nuclear agreement with the West. The end of sanctions is unlikely to yield much improvement in ordinary Iranians’ conditions of life, and the government did not want to raise expectations.

Iran’s economy is badly stressed. The official unemployment rate is 11%, but only 37% of the population is considered economically active, an extremely low ratio given the concentration of Iran’s population in working-age brackets. Some social indicators are alarming. The number of marriages has fallen by 20% since 2012. “In Iran, the customary marriage age range is 20-34 for men and 15-29 for women … 46% of men and 48% of women in those age ranges remain unmarried,” according to the national statistics agency. So-called “white marriage,” or cohabitation out of wedlock, is so common and controversial that the regime banned a women’s magazine last year for reporting on it.

Economic problems explain part of the falling marriage rate, but the corrosion of traditional values also is a factor. Iranian researchers estimated late in 2015 that one out of eight Iranian women was infected by chlamydia, a common venereal disease that frequently causes infertility. According to the Center for Disease Control, one out of 170 American women carry the infection. The combination of falling marriage rates and epidemic rates of venereal infection point to a society that is losing cohesion. Iran’s theocratic leaders are too prissy to gaze at statues of nudes in Italy, but they are presiding over a disintegration of family values unlike anything in the world.

That is especially disappointing to the regime, which has tried to raise Iran’s fertility rate from just 1.6 children per female by offering incentives to prospective parents and by reducing availability of contraceptives. If anything, Iran’s demographic spiral seems likely to worsen. Iran’s population is already aging faster than any in the world, and the young generation’s rejection of family life points to catastrophic economic problems twenty years from now.

From a financial vantage point, Iran faces something of a Red Queen effect: it needs more money from abroad merely in order to stay in place, that is, to maintain its existing energy infrastructure. The end-of-sanctions bonanza saves Iran from an economic crash after the oil price collapse, but it doesn’t lift the country out of the doldrums.

Originally published in Asia Times on January 27, 2016.  Republished with permission.