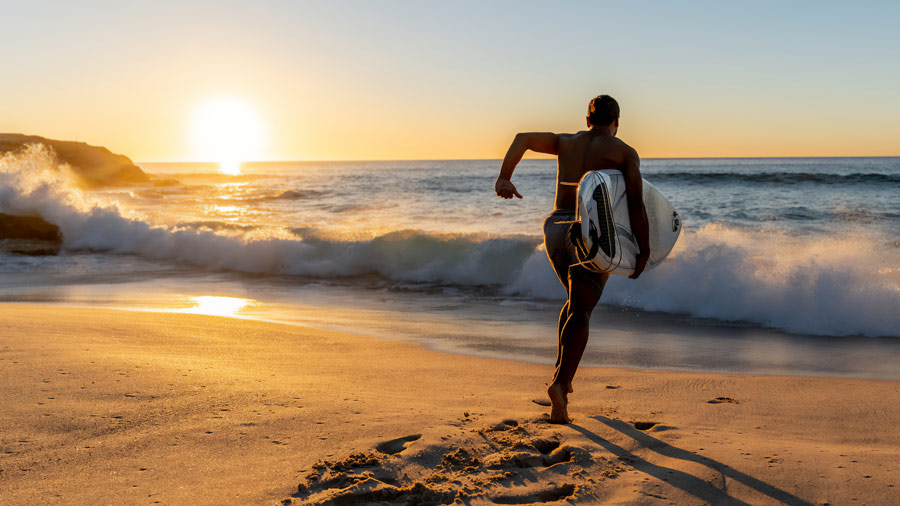 It only takes a few minutes of listening to Richard Brueckner talk about surfing until you realize that Brueckner is explaining a lot more than just surfing. He’s talking about the optimism of America. He’s rejoicing in what really matters to the human soul.

He’s describing the grandness of God.

“The nature of a surfer is a spiritually connected person,” Brueckner says. Surfers “are faith and experientially based people rather than fear-based people. If they were fear-based people, they would not be doing the sport.”

Brueckner, 49, sees surfing not just as something he has done since he could walk, but also a rejection of fear — particularly the COVID panic that has gripped the world over the last two years of lockdown. I’m talking to him in his law office on the second floor of a two-story building on 63rd street in Ocean City, Maryland. On the wall across from his desk is mounted a green surfboard, which he uses every morning before work.

Brueckner is not only a surfer, but a DWI lawyer. You read that right — when he’s not surfing, he spends his days defending people who got pinched driving down to Ocean City to party. He also teaches a class on surfing and life at a local middle school. He’s one of the few people you meet about whom it can be said that he genuinely cares about helping other people. Which is not to say that Brueckner is a monk. His immaculate white Porsche is parked in the driveway just outside his office.

We met because I’m on the DelMarVa peninsula on the Eastern Shore of the Mid-Atlantic region writing a piece about the sales of surf gear during the pandemic. Unlike everything else that was shut down — except maybe skateboarding — surfing thrived during the Fauci Reign of Terror. When people felt trapped inside, they found a safe escape in the ocean. Sales of surfboards boomed. I wanted to write a story about a fun activity that became popular during a shutdown.

I got much more than that. Brueckner is an intelligent and charismatic speaker, not only a surfer, but an evangelist. He preaches about surfing as a way of seeing the world that contradicts not just COVID paranoia, but the other trends that have made culture war America such a cheap, nasty and shallow place. He’s the anti-resentment revivalist that a country enslaved by Twitter and petty politics needs.

Then he offers this: “When you are out there in the morning waiting for a wave, and the sun is coming up, and a dolphin goes by, it’s impossible not to know that they are connected to the universe and that there are things out there way bigger than you.”

Dressed in an immaculate white shirt and orange tie — his court clothes — Brueckner comes around to my side of the desk. He swivels his computer around so I can see the screen. He calls up a website, Magicseaweed, that gives the local weather conditions and how they affect surfing. Today is windy and raining, but that will result in better conditions tomorrow, when it clears up. “We spend our time looking forward to what is coming,” he says. “You’re always looking ahead to the great conditions that are coming.”

Brueckner’s healthy mental outlook is common among surfers. There have been articles in newspapers, medical journals and surfing magazines talking about how the sport is a natural anti-depressant. “That feeling of a natural high after catching a wave comes from elevated levels of dopamine and adrenaline,” wrote surfer Nio Poniatowski recently. “Adrenaline raises our heart rate and makes our bodies produce ‘positive stress.’ This positive stress will condition us to deal with everyday life stress. The chemical neurotransmitter, dopamine, is triggered when we do something we love. It’s that natural high that keeps you going back in the water.”

Surfers are unique in the sense that as the world has become enslaved in the digital realm, they are defiantly old school. Several years ago, Peggy Noonan (I know, she’s too, too precious, but still) wrote a column in which she made reference to “America’s playground.” Noonan meant that until very recently, Americans both young and old had playgrounds they used to keep themselves balanced.

Kids had literal playgrounds, as well as parks, dirt roads, mountain bikes, and long winding paths in the woods. Adults had dance halls, cocktail parties, and, in the case of things like surfing and skateboarding, a shared realm of spiritual connection and fun with younger generations. Nolan was lamenting the loss of such essential places years before COVID.

Banned From the Beaches

For guys like Richard Brueckner, that playground has never gone away. The only time during our talk when he looks exasperated is when recalling the height of the pandemic. That’s when various beaches actually banned people from surfing. “It was ridiculous,” Brueckner says.

The next morning I get up early and drive down the 35th street, where Brueckner said there would be surfers. The wind and rains of yesterday have created perfect waves. Sure enough I see them, small dark figures floating on their boards. As the sun breaks through the clouds, I wade in and start to swim out. I can taste freedom.