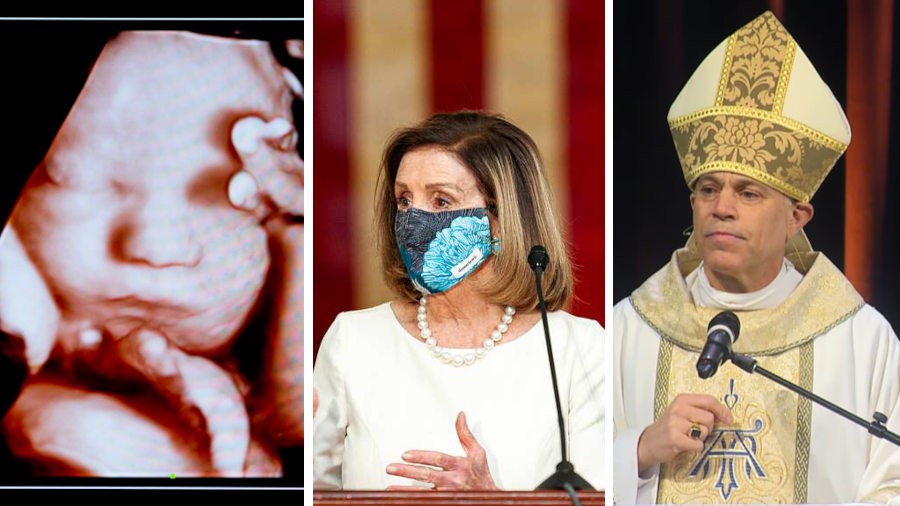 Regarding San Francisco Archbishop Salvatore Cordileone, who is under fire for his position on denying communion to House Speaker Nancy Pelosi, Ruth Institute President Dr. Jennifer Roback Morse stated: “We commend Archbishop Cordileone for his courage and clarity on the most important moral issue of our time.”

“The Ruth Institute is an international interfaith coalition to defend the family. As such, our staff, volunteers, and supporters come from diverse religious backgrounds. Yet I feel confident that I speak for all of us in congratulating Archbishop Cordileone for his moral vision and faithfulness to Judeo-Christian tradition.”

“The deliberate, direct taking of innocent human life is immoral and inexcusable,” Morse said. “The followers of the Ruth Institute, despite their theological differences, are united on this point. Abortion is a violation of natural and divine law.”

“Nancy Pelosi has publicly and obstinately worked for the preservation and expansion of an unlimited right to abortion. Archbishop Cordileone has used his authority as her bishop to instruct her not to present herself for Holy Communion. He has told the priests, deacons and Eucharistic ministers within the archdiocese to likewise deny her communion. This is not ‘grandstanding,’ contrary to the opinion of the San Francisco Examiner. This is a responsible use of his religious authority.”

In 2021, the Ruth Institute presented a dozen white roses to Archbishop Cordileone for upholding the Church’s teaching on the sanctity of life, and for his defense of the Eucharist in his Pastoral Letter, “Before I Formed You in the Womb, I Knew You.’

“In that letter, Archbishop Cordileone explained the Church’s teaching on abortion in a dignified and thoughtful manner. His teaching is clear, accurate and uplifting, all of which are necessary at the present time. The archbishop stands firmly for the ancient teachings of the Catholic Church on the sanctity of life and the Eucharist.”

“Archbishop Cordileone is a tower of strength and a beacon of hope to Catholics and non-Catholics alike,” Morse said.

Progressive Philosophy Has No Room for Love

The latest Dr. J Show features Dr. Scott Yenor, who will receive the Scholar of the Year award at the Summit for Survivors of the Sexual Revolution, June 24–25 in Lake Charles, Louisiana. Dr. Yenor is a political science professor at Boise State University and author of Family Politics: The Idea of Marriage in Modern Political Thought and Recovering Family Life.

Dr. Yenor explains what conservatives have gotten wrong when promoting the family over the last 50 years since the Sexual Revolution. “We’ve lost ground on nearly every front.” Fewer people are getting married, birth rates have diminished, and the rise of transgenderism, “alphabet soup,” and cohabitation has become a social crisis.

It’s time for conservatives to take stock of what they’ve done, assess reasons behind failures, and determine future actions. “If conservatives are interested in conserving one thing, it needs to be the nuclear family,” Dr. Yenor says. They’ve “had their eye on the wrong ball.”

Tax credits for children have been a good thing, but they’ve done nothing to encourage more or larger families. Conservatives focused on economic problems, but not the cultural challenges families face, such as the notions of feminism and sexual liberation.

We need parents to cultivate in their children the true meaning of being a man or a woman, true masculinity and femininity, Yenor says. Watch the full interview.

Emerging Leaders Program Will Train the Leaders of Tomorrow

The Ruth Institute is offering a limited number of scholarships for the Emerging Leaders Program at its Summit for Survivors of the Sexual Revolution, June 24-25 in Lake Charles, LA.

Ruth Institute President Dr. Jennifer Roback Morse, Ph.D., said: “The program is for young adults, ages 18 to 30, who are currently involved in the pro-life/pro-family cause and wish to become more effective in their work.”

The scholarships will cover:

The application deadline for travel grants is June 1. However, applications will remain open until June 10.

The theme of this year’s Summit is Fighting for Your Family: Arming You for Success.

Topics to be covered include:

The keynote speaker at the Friday night banquet is Kristan Hawkins, president of Students for Life of America, one of the nation’s most effective pro-life organizations.

Morse explained: “The Emerging Leaders Program will help participants become effective advocates and strategists for life and the family. They’ll learn how to defend Judeo-Christian values in just 15 minutes, discover the danger of Demographic Winter, and come to understand the connection between abortion and gender-identity politics.”

“They’ll also have an opportunity to meet and be informed by leaders, scholars, authors and activists whose work is shaping the pro-life, pro-family movement.”

Virtual passes for the Ruth Institute’s Summit for Survivors of the Sexual Revolution, June 24-25 in Lake Charles, Louisianna, are now available for only $35. (In person registration is $199.)

Those attending via streaming get all of the Summit sessions, including the Friday evening banquet and awards ceremony, plus digital access to the entirety of Summit recordings well before they’re released to the public. Those who watch live will also be able to submit questions to the speakers via the chat box.

Speakers include Kristan Hawkins (president of Students for Life of America), Fr. Shenan Boquet (president of Human Life International), and Dr. Quentin Van Meter (president of the American College of Pediatricians). The Witness of the Year is Walt Heyer, who lived as a woman for eight years, reembraced his male identity, and now helps those struggling with their gender identity.”

Morse will speak on “Defending Your Values like a Pro,” a 15-minute defense of traditional Christian sexual ethics that anyone can use. Fr. Paul Sullins, the Ruth Institute’s Senior Research Associate, will discuss “Counting the Casualties of the Sexual Revolution.” And Don Feder, the Institute’s Communications Director and Coalitions Coordinator, will talk about “Demographic Winter and the Future of Freedom and Family.”

Morse remarked: “We hope pro-life/pro-family leaders and activists will attend the Summit in person in scenic Lake Charles, in the heart of Cajun country. For those who can’t, we’re offering all-access virtual passes for the unbelievable price of $35.”

“Everyone who’s concerned about attacks on life and the family owes it to themselves to take advantage of this fantastic opportunity. And again, those purchasing a virtual pass can participate live and will have access to Summit recordings long before they’re available to the public.”

“In one way or another, we hope to see you at the Summit!”