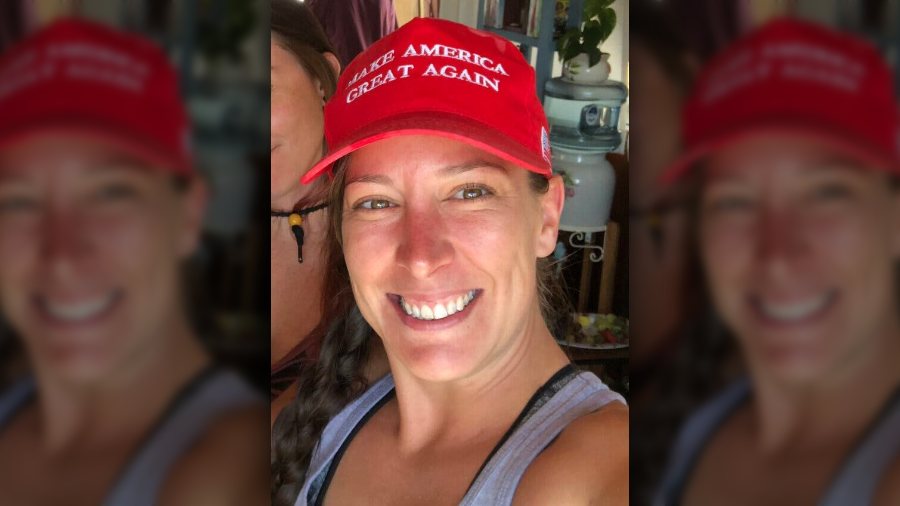 Aaron Babbitt, Ashli Babbitt’s husband, has been on a mission of discovery to piece together the evidence on what really happened inside the Capitol on January 6. As you know, his wife was the only direct casualty of that day’s violence, shot dead by Capitol Hill Police Lt. Michael Byrd as she attempted to climb, unarmed, through a broken-out window in the door to the Speaker’s Lobby. Last week, after viewing video shot by self-appointed “documentarian” John Sullivan, Aaron concluded that Ashli was not even part of the riot — that, in fact, she had been trying to stop the riot.

A Rowdy Crush of People

After forcing himself to watch and analyze that agonizing video over and over, he concluded that she was crawling through the window to get away from the rowdy crush of people outside the door. With the training she’d had as an officer herself, she knew things were getting out of control, and she wanted to get to safety. Aaron also says she was claustrophobic, severely enough for them to have to leave events because of large packed crowds.

Aaron has since had the opportunity to examine additional video of the riot and shooting, and it shows much more detail, which reinforces his conclusion that his wife had been trying to stop what was happening.

He had already seen that the man who broke the window by punching it and repeatedly hitting it with a riot helmet, identified as Zachary J. Alam, was delayed in his own attempt to crawl through the window when his glasses got knocked and he had to reposition them. The new video shows that Ashli was the one who hit him in the face, after grabbing him in an apparent attempt to stop him.

The video shows that for several minutes before she was shot, Ashli shouted at the rioters to stop vandalizing the Capitol, her face registering great distress. Video also reveals that she was shouting at the police guarding the doors to call for backup. She also shouted at Alam as he was breaking the glass: “Stop it!”

Newly-reviewed video shows Ashli grabbed Alam’s backpack and hit him in the nose with a left hook, knocking his glasses out of position on his face. As Alam reset his glasses, Ashli started to climb through the broken-out window. Of course, that’s when she was shot. Accounts differ as to whether Byrd shouted any warning before he fired; if he did, it might have been impossible for her to hear.

Witnesses think it’s likely that Ashli, in delaying Alam’s scramble through that window, unwittingly saved his life before she lost her own.

Babbitt told The Epoch Times, “As we keep seeing these videos and it’s all coming into play and it’s literally laying out everything I’ve said from day one, that she’s a good person, that she loved this country, she was law enforcement, pro-law enforcement, wasn’t breaking anything, didn’t hurt anybody — we’re seeing it now.”

Additional video shot by journalist Tayler Hansen has shed even more light on what happened. Amazingly, it shows Ashli yelling at the three officers guarding the door to call for help. When they didn’t, she berated them for their inaction. “You’re a fraud!,” she yelled. “You’re a [expletive] fraud! You’re wrong!”

Another video, shot from another angle and farther away, shows that Ashli was not the woman who shouted, “Take it down,” as has been erroneously reported.

Ashli Was No Insurrectionist

It’s now clear the situation had gone from calm to mayhem in just a few minutes. “I think she just realized she was in a bad spot, something wasn’t right,” he said. “She had her wits about her. The frustration came out when she punched him [Alam] in the face, because he deserved it. He deserved it from a man, not the little woman there in that small hallway.”

The strangest thing to us about this whole scenario is the cops’ inaction. Some had left their post by the door, and the three who remained were just standing there. Aaron doesn’t understand that, either. “He [Alam] deserved it from a cop,” he said, “but none of that was happening. For a former law enforcement person to be seeing this happening is like mass confusion, ‘What is going on here right now?’”

This would have gone against all her training and common sense. Ashli, 35, was a military police officer in the Air Force and National Guard for 14 years, after enlisting at age 17. Ironically, she actually served in the National Guard for the District of Columbia, which defends the Nation’s Capitol. She was not there to tear it down.

From cameraman Hansen: “She was not a terrorist, she was a vehement supporter of law enforcement who took major issue with those who didn’t do their jobs on January 6th. The family should be heavily compensated by the mainstream media and the government for the propaganda they’ve pushed surrounding Ashli.”

The new information related above comes from a premium story from Joseph Hanneman in The Epoch Times.

Zachary Alam Due in Court in February

According to The Epoch Times, Zachary Alam was arrested on January 30 of last year. This past November, the DOJ issued a “superseding” indictment that charges him with 11 counts, including assaulting, resisting or impeding police with a dangerous weapon; civil disorder; and destruction of government property. He’s due in court in February for a status conference.

Stills show him wearing a MAGA hat under his fur one. He had previously been in jail and refused to turn himself in because he didn’t want to go back.

Here’s more, from a local story out of Lancaster, Pennsylvania, where he hid out.

We also found a legal document online, a petition for Alam’s release on bond dated June 4, 2021, saying he’d been detained since February 6. (Don’t know if he was released.) So he doesn’t seem to fit the category of those mysterious individuals who encouraged the breach of the Capitol but weren’t detained. So far, we haven’t been able to find out anything about who else he was with that day.

But as a postscript, we’ll tell you who was just sentenced: our friend Brandon Straka, founder of the #WalkAway Movement. Though he did not enter the Capitol that day, he’s been sentenced to three months of home detention and a $5,000 fine. “Even if he didn’t personally engage in violence or property destruction during the riot, Straka encouraged and celebrated the violence of that day,” Assistant U.S. Attorney Brittany Reed wrote in a court filing.

Straka’s attorney said they were violating his First Amendment rights and “attempting to make a public spectacle of a prominent Trump-supporting influencer.” As if anyone in our system of justice would ever do that.

Ashli’s Husband: The Narrative About Her is All Wrong