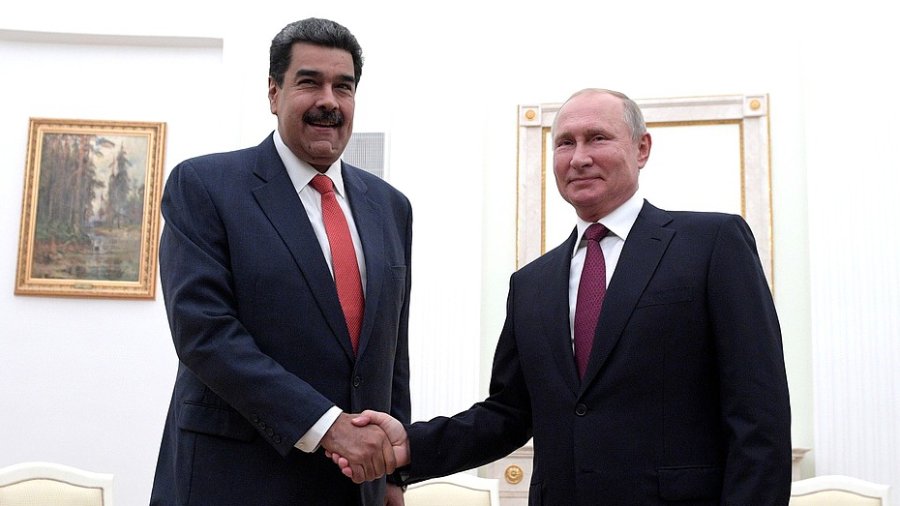 Vladimir Putin relishes using Russia’s political and economic power to destabilize and disrupt nations. One example of such activity is in Venezuela, where Russia has been propping up Venezuelan dictator Nicolas Maduro through billions in loans and buying oil with the Russian company Rosneft.

Maduro is one of the most brutal dictators of our time, and the Trump administration is actively working to oust Maduro from power. Millions of citizens have fled Venezuela. The country is overrun with violent drug cartels, Russian and Cuban military units operate freely within the country. Maduro’s government now runs on illegal sources of income such as gold mining, which destroys Venezuela’s environment and widespread drug trafficking. This illicit drug business has brought in many bad players, including Hezbollah, further destabilizing the nation. Venezuela’s legitimate economy and social structure have almost completely collapsed.

In a new effort to get tough on Maduro, the president’s team recently imposed economic sanctions on Rosneft Oil to thwart Russia’s efforts to help Maduro. It’s a smart move.

State Department Special Representative for Venezuela, Elliott Abrams, describes the sanctions as, “A campaign of pressure, and the pressure continues to mount. I think this is a very significant step, and I think you will see companies all over the world in the oil sector now move away from dealing with Rosneft Trading.”

The administration has carefully calibrated these sanctions, so they do not disrupt the stability of the global oil market. Instead, President Trump is strategically targeting a company whose leader, Igor Sechin, is a close ally of Putin. The president, to ensure the sanctions are not destabilizing, is giving companies a 90-day window to cut ties with Rosneft.

While not disrupting global oil prices, these new sanctions will be a problem for Maduro. Targeting Rosneft, the biggest receiver of Venezuelan oil squeezes Maduro, who is already reeling from earlier sanctions imposed by the president. The day after the Trump administration sanctioned Rosneft, Maduro declared an “energy emergency,” an implicit confession that these latest American actions are causing him pain.

Maduro is relying on an illegal economy to obtain revenue and this will likely be his downfall as crime, violence and citizen revolt will further erode his power. But the president’s team must preserve America’s presence in Venezuela while the world waits for the Maduro regime to fall. The next Venezuelan government will have to rebuild the country and restore a legitimate economy. And America’s presence in the country will make this process easier.

That is why President Trump should let American energy companies maintain their presence in Venezuela. These companies have been operating in Venezuela for nearly 100 years, providing jobs and income for thousands of Venezuelan workers. If the Trump administration forces American companies out, Russia, China and Cuba are literally standing in the wings, waiting to take control of Venezuela’s massive oil fields.

The Trump administration has, to date, allowed American companies to operate in Venezuela in anticipation of the day Maduro is gone. In January, American U.S. companies were given a three-month extension to continue their work. Such permission should be extended permanently.

Targeted sanctions against Rosneft prove the Trump administration understands how to bring an end to Maduro’s brutal reign. Freedom will not come to the Venezuelan people instantly, but the United States should do everything in its power to ensure that when it does, it will be stable and long-lasting. That can only happen if an American presence is maintained in the country. President Trump can continue fighting for this goal by allowing American oil companies to remain in Venezuela and box Russia, Cuba, and China out.

Ken Blackwell is a senior fellow at the Family Research Council. He was formerly United States Ambassador to the United Nations Commission on Human Rights.