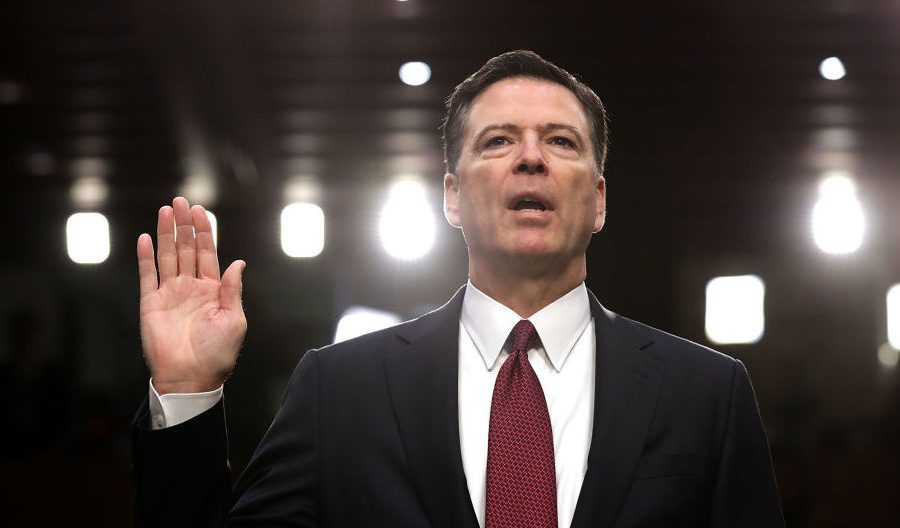 Then-FBI Director James Comey takes an oath to tell the truth. He and his FBI/DOJ cronies did not tell the truth to the FISA Court, the court's new chief judge declared last week.

No, the FBI didn’t just make “errors and omissions” (51 of them) in their FISA applications targeting the Trump campaign. The FISA Court says it was deception.

As reported by John Solomon in Just the News, U.S. District Judge James A. Boasberg, the new chief of the Foreign Intelligence Surveillance Court, issued an order last week suspending all FBI and DOJ lawyers involved in the Russia “collusion” case from appearing before his court until it’s determined whether or not they engaged in misconduct. (I would note that at this point, many are no longer there.)

Boasberg blamed senior officials in a scathing rebuke, saying, “The frequency and seriousness of these errors in a case that, given its sensitive nature, had an unusually high level of review at both DOJ and the Federal Bureau of Investigation have called into question the reliability of the information proffered in other FBI applications.” In other words, we can’t believe the FBI.

The FBI Lied to Get at Trump Campaign

Cutting to the chase, Judge Boasberg said there’s “little doubt that the government breached its duty of candor to the Court with respect to those applications.” The judge here is accusing the FBI of lying to the FISA court.

He went on: “The errors the OIG [Office of Inspector General] pointed out cannot be solved through procedures alone. DOJ and the FBI, including all personnel involved in the FISA process, must fully understand and embrace the heightened duties of probity and transparency that apply in ex parte proceedings.”

Translation: It’s not enough to do what FBI Director Chris Wray wants to do and reform the process. This needs to go further. All personnel involved with FISA have to understand and be committed to the heightened importance of transparency and proof in proceedings such as this, in which a judge rules without all parties being present.

Top FBI and DOJ officials have spent three years trying to weasel out of being held accountable. James Comey recently said it was “nonsense” that the FBI opened the “Trump/Russia” probe without good cause. Rod Rosenstein said that the DOJ took its responsibility to submit “admissible evidence, credible witnesses” very seriously. (I guess he means the phony “dossier”?) How refreshing that this ruling by Judge Boasberg has placed the blame right where it should be.

A Move in the Right Direction

We still don’t have indictments, but this certainly is a move in the right direction. As Solomon put it, “A judge has formally concluded that his court was misled by the work product they oversaw and signed.” By “they,” he means people at the top: James Comey, Andrew McCabe, Sally Yates, Rod Rosenstein and others.

Ranking House Intelligence Committee member Devin Nunes of California still calls this action “too little, too late.” He appeared on Monday’s Hannity along with Gregg Jarrett and Sara Carter shortly after meeting for about an hour and a half with Attorney General Bill Barr. But Democrats control the House right now, and it’s doubtful they’re going to pursue needed reforms. Nunes said what needs to happen is for Congress to “open up” FISA and really take a look at it. But as Congress is currently led by Democrats, that isn’t happening.

“At the end of the day,” he said, “we need FISA to protect this country, but not if it comes at the sake of our liberties that we would have to give up.”

FOX legal analyst Gregg Jarrett said he believes the only way to bring about real reform is to either get rid of FISA entirely or adopt the rule Sen. Rand Paul has called for: No more FISA spying on Americans. The “Foreign” Intelligence Surveillance Act needs to be applied only to foreign, not domestic, spying.

Sara Carter pointed out that to spy on Americans on U.S. soil is a violation of Fourth Amendment. (I would add that the FBI apparently went around the Fourth Amendment by luring Americans to foreign soil to spy on them there!) Carter was right in saying we can’t trust the intel bureaucracy to do their job within the system as it exists right now.

British ex-spy Christopher Steele, whose name is on the anti-Trump “dossier” that was used to mislead the FISA court, also came up in the conversation with Hannity. Here’s the latest on him, as reported by Chuck Ross at The Daily Caller: Steele recently defended his dubious dossier at a private event sponsored by the Oxford University Student Union. “I stand by the integrity of our work, our sources and what we did,” he said.

The FISA Court certainly would not agree with Steele’s self-assessment. They found that the FBI could not corroborate Steele’s allegations regarding Carter Page and other Trump associates. They also found Steele’s only direct source disputed much of what was in the “dossier.” That source’s FBI interview in early 2017 “raised doubts about the reliability of Steele’s description of information in his election reports,” they said.

Before the 2016 election, Steele himself told his FBI contacts that one subsource of his was a “boaster” and “egotist” who was unreliable. Then there are the known factual errors, such as the claim that Michael Cohen visited Prague in August of 2016 to meet with Kremlin officials to discuss paying off computer hackers. (!) Say what you will about Michael Cohen, but he never made such a trip to Prague. In fact, as far as anyone knows, he has never been to Prague.

Over the past three years, Steele has gone back and forth on the reliability of his work as his own convenience warranted. What he’s saying now is certainly at odds with what he reportedly said under oath in a British deposition. Aside from that, the FBI got plenty of warning that it was really just political garbage paid for by Hillary Clinton’s campaign (with money laundered through the law firm Perkins Coie), but they used it, anyway.

We know that most of the “dossier” wasn’t even written by Steele, but by Fusion GPS. (Read Lee Smith’s The Plot Against the President). Also, the Mueller report found no evidence of a conspiracy between the Trump campaign and Russia, though Steele had alleged this in his “dossier.”

We know Steele had hoped to keep Trump from being elected. So perhaps his renewed defense of the “dossier” is intended to help keep him from being re-elected. He has said he won’t cooperate with the Durham investigation. And not surprisingly, he disparaged Trump at the Oxford event. “Trump himself doesn’t like intelligence because its ground truth is inconvenient for him,” Steele lied. “The reality check is that Russia is a hostile state as it is run at the moment, it is out to destabilize the West, and it is nefarious in the way it goes about its business.”

Well, yes, we all know Russia wants to destabilize the West. But “ground truth” means “facts or firsthand information,” and Steele relied on fiction when the facts were on the President’s side. Steele himself — not to mention the FBI — must’ve pleased Russia to no end by encouraging that very destabilization.