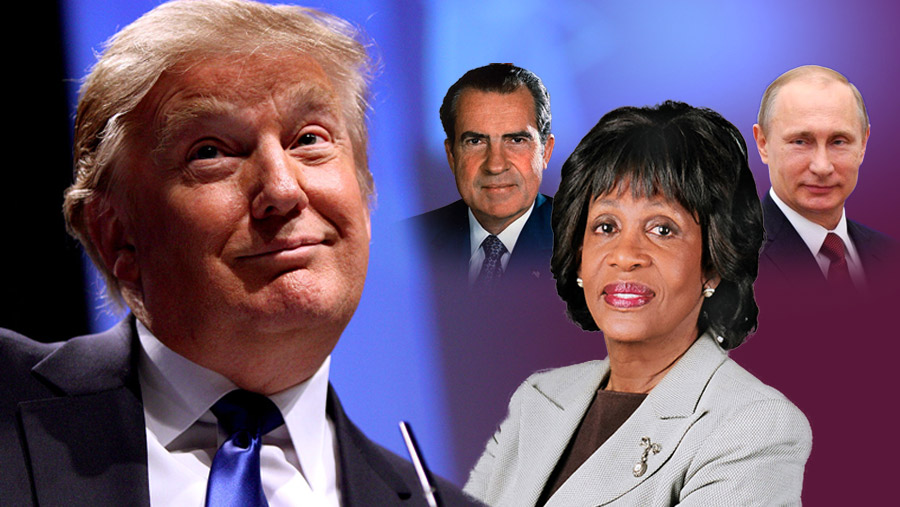 As the impeachment dominates nearly every headline and evening news sound bite, President Donald Trump impeachment talk is louder than ever. Of course, this is nothing new. The week after a whistleblower repeated secondhand information that President Trump’s conversation with the president of Ukraine was an impeachable offense, former Gov. Mike Huckabee said in his monologue on his TV program in late September: “I thought that’s what we’ve had ever since he got sworn in.” Democrats, angry that Trump won in 2016, have been trying to get him out of office almost since he was inaugurated, and this latest effort is more of the same. As Huckabee said: “This is, frankly, window dressing so the Democrats can say they’re trying to impeach the president. Now, don’t get me wrong. They’re going to do everything they can to do it. But you’ve got to have a reason. You can’t just impeach a president because you don’t like how the election turned out. And that’s basically what we’re dealing with.”

Later in the same show, Judge Jeanine Pirro blamed the deep state for all the impeachment drama: “They’re pretty much deciding how things should be handled. They don’t care what the rules are. They know how to circumvent the rules. They know what the loopholes are. And they get together, and they decide what they’re going to do. And a classic example was the effort to unseat a sitting president.”

Attacks from the Pit of Hell

While I want to be careful in predicting the future, I believe Donald Trump will survive this attack, too. I think the Democrats know they can’t beat him at the polls, but if they can create a “scandal” and make him damaged goods in the eyes of some voters, that may shift enough votes to steal the election from him. One of the reasons Trump could lose that I cite in my new book, God, Trump, and 2020 Election, is the dishonesty of the other side. But let’s be clear. These impeachment efforts are not about what Donald Trump may have said in a phone call with the Ukrainian president. It’s that this president, as imperfect as he may have been in the past, has been standing for religious liberty and righteousness. He has stood with Israel. He is strong. He can’t be intimidated.

The attacks are, in my opinion, from the pit of hell. As a Christian, I believe that Satan is behind this. He is trying to steal, kill and destroy. And Donald Trump has been raised up by God to stop our nation’s headlong plunge into total depravity. It’s God’s mercy to America since we deserve judgment.

I’m amazed at how many of my sincere Christian friends are surprised by all these demonic attacks against the president. Why should they be surprised? Satan hates it when America stands with Israel. He hates it when righteousness and religious freedom are championed. No wonder he and his minions have focused their hatred at Donald Trump.

I purposely wrote my newest book months before the election in order to motivate Christians and conservatives to reelect Donald Trump. Because I wrote it so far in advance, I knew things would change depending on who ran on the Democratic ticket. My feeling is that it doesn’t matter which one of them wins the nomination — someone new could even jump into the race right before the primaries begin — they all will be equally bad. If a Democrat wins in 2020, all the good things Trump has done will be immediately undone. Plus, once they are in power, they will try to take away our liberties as Christians and create hate crime legislation that will actually make proclaiming the gospel illegal if it contradicts the Left’s politically correct perception of reality.

As I’ve said before, even though I have included a chapter on why Trump might lose, I personally believe he will win. That’s because while Satan comes to steal, kill and destroy, Jesus comes to give life and give it more abundantly. I believe God has a plan for America. And I believe He raised up Donald Trump to help accomplish that plan. I believe God spoke to prophets over the years, telling them that He would play “the trump card.” I outline this in God, Trump, and the 2020 Election, but I document only a few of the prophecies that have declared Trump would win. The prophets were right in 2016, even if everyone else expected Hillary Clinton to win right up until the votes were counted. I believe the prophets will be right again this time, and that in 2020 Donald Trump will win a second term.

Satan is behind this. He is trying to steal, kill and destroy.

Of course, the larger culture doesn’t believe in prophecy, and they could care less about God’s will. Even many Christians look at political trends and often use many of the same tactics as their secular counterparts in order to win at the polls. But as a Charismatic Christian who believes in the work of the Holy Spirit and the gift of prophecy, I base my belief on what the prophets have said — not what the talking heads on cable TV or the reporters in the New York Times newsroom think is going to happen.

In his first three years as president, Trump has exposed that deep-state operatives in the Department of Justice and the FBI have engaged in a blatant attempt to overthrow an elected president. With a whistle-blower’s report, it seems the CIA is also part of the coup against Trump. CIA director Gina Haspel has close ties to former CIA director John Brennan, who served during the Obama administration, so nothing that comes from the CIA against Trump surprises me.

Two years ago, my friend Doug Wead, who I quote extensively in my book, had an interview with Lou Dobbs that in hindsight was prophetic, and a clip of that interview has been circulating recently on the internet. Back then, he claimed that the deep state, which has successfully overthrown the governments of foreign countries, is going to continue to actively seek a coup d’état of the duly elected president of the United States.

He said if there was ever a time in history to be concerned about another rise in communism, now is that time. Wead said the deep state is determined to overthrow Donald Trump. The presidential historian refused to mince words, saying: “We have very skilled, talented professionals [in the US government]. They’ve overthrown governments in Vietnam and the Philippines, in Iraq and Iran, in Egypt, in the Ukraine. Duly elected democratic governments. They created what they called ‘popular uprisings.’”

Of course, we should expect nothing less from shadow governments. As Wead noted, the very same people — some of whom work in the State Department, some in intelligence, and some in the media — have successfully caused uprisings in several other countries. They’ve worked together to overthrow foreign governments, and Wead believes Trump is a thorn in their side preventing a global takeover.

The deep state coup against Trump will only continue. If the so-called CIA whistle-blower’s story is exposed as false, rest assured that the Washington deal makers, along with the Democrats and the corporate-controlled press, will invent any story and false scandal to try to destroy Trump’s chance of reelection. So, be prepared; there will be more to come. Only time will tell of the intrigue of the so-called “swamp.”

Trump Will Be Vindicated

So even if the Democrats find the 218 votes needed to pass articles of impeachment over trumped-up, nonsensical charges, I believe Donald Trump will be vindicated. At the risk of being redundant, I stand by the things I’ve written in my book about what is at stake in this election, the policies Trump has advocated and the type of man he is. I especially stand by the spiritual perspective I have presented — that this is spiritual warfare and Christians must wake up. A passive church is part of the reason the country is in the mess it is in. But Christians also have been praying, and God answered prayer in the form of a man with no experience in politics and a bellicose style that turns some people off.

God raised up this man to lead our nation, and I believe Donald Trump will win a second term to complete the work he started — because I believe God has spoken.

Stephen E. Strang is an award-winning journalist, founder and CEO of Charisma Media and author of the best-seller God and Donald Trump. This content was excerpted from his new book, God, Trump, and the 2020 Election.