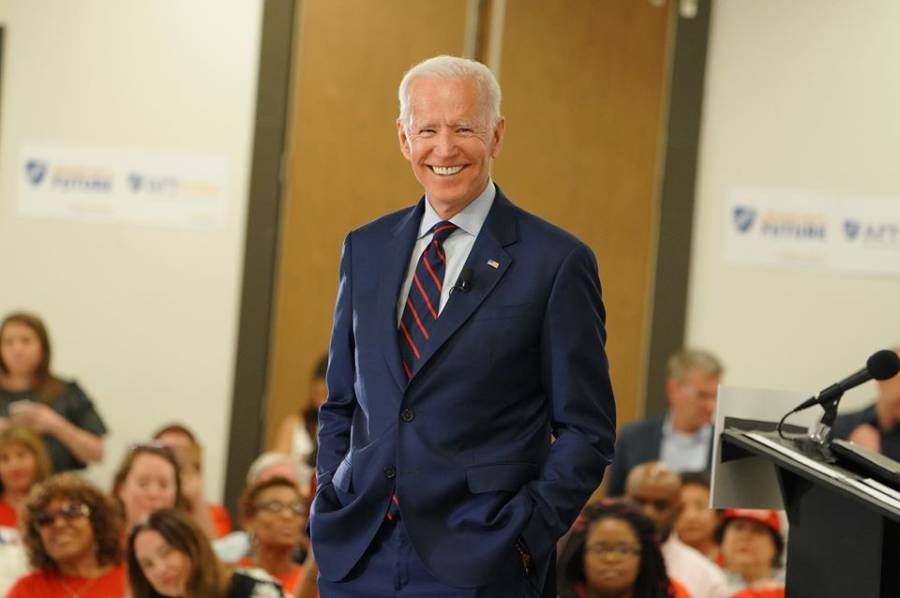 Biden discussed Reade’s allegations of sexual assault against him for the first time Friday morning on MSNBC. The former vice president released a statement shortly before this appearance in which he again denied the allegations, noting that the papers he donated to the University of Delaware from his time as a Delaware senator do not contain his personnel files.

He argued on MNSBC that his UDelaware files should not be opened up to the public as they could impact his political career.

“There is only one place a complaint of this kind could be — the National Archives,” the former vice president said in his Friday morning Medium post. “The National Archives is where the records are kept at what was then called the Office of Fair Employment Practices.”

“I am requesting that the Secretary of the Senate ask the Archives to identify any record of the complaint she alleges she filed and make available to the press any such document,” he added. “If there was ever any such complaint, the record will be there.”

But Biden’s comments on the location of these records are incorrect, according to the National Archives.

“Any records of Senate personnel complaints from 1993 would have remained under the control of the Senate,” the National Archives Public and Media Communications staff said in a statement to the Daily Caller News Foundation.

A National Archives spokesman also told Business Insider that the archives do not hold Office of Fair Employment Practices records.

Center for Legislative Archives spokeswoman Dorothy Alexander pointed the DCNF towards rules of access regarding House and Senate records held within the Center for Legislative Archives — rules that prohibit opening House records for 30 years and Senate records for 20 years. For both the House and the Senate, records that contain personal information closed by statue are closed for 50 years.

It remains unclear where Office of Fair Employment Practices records that involve Reade may have gone. Biden has not responded to a request for comment on the matter from the DCNF.

Reade worked as a Senate staffer for Biden in 1993 and has accused the then-senator of kissing her, touching her and penetrating her with his fingers without her consent. After the alleged assault, Reade told the DCNF, she complained about sexual harassment to three Biden staffers: Marianne Baker, Biden’s executive assistant, and Dennis Toner and Ted Kaufman, who were both top Biden aides at the time.

But Kaufman, Baker and Toner would not take action when Reade complained to them about sexual harassment, Reade said, so she filed a written complaint with an office she called the “Senate Personnel Office.”

Complaints of this kind were handled by the Senate Office of Fair Employment Practices in 1993, which was replaced by the Office of Congressional Workplace Rights (OCWR) following the passage of the Congressional Accountability Act in 1995.

The Office of Senate Fair Employment Practices received 28 formal complaints between June 1992 and September 1994, according to a Senate report on the office published in the 1990s. However, OCWR would not say whether it maintains records relating to the complaints received by its progenitor.

“To protect the confidentiality of all claimants, the OCWR does not comment on whether specific claims may or may not have been filed with the office,” OCWR Communications Director Nancy Baldino told the DCNF. She did not respond to further requests for comment.

Reade says she filled out an intake form and handed it to whoever was behind the desk at the office. She was told that someone would call her in for a full discussion and meeting – but “that never happened,” she told the DCNF. She says she does not have the form.

Reade attempted to track the complaint down in 2019. She said she was told that “it would have gone back to Joe Biden’s office, to the Chief of Staff.” She is unsure who told her this, but believes it may have been OWCR.

If this complaint were located, she says, it would show that Biden’s staff members lied on the record when they said they did not have meetings with her, noting that she had more than five meetings total — informal and formal — with these staff members. It would also show the approximate dates of when some of the events she has mentioned happened, she told the DCNF.

Reade has also told Business Insider that Kaufman took notes when she spoke with him.

“He’s now denying that we ever had the meeting, and I watched him take notes,” she said. “Those notes would be in my personnel file, along with sick days or any kind of extra notes that I turned in.”

Reade believes that her complaint is included in Biden’s Senate records, which are housed by the University of Delaware Library and cover a wide swath of Biden’s political career but are being kept secret until he “retires from public life,” spokeswoman Andrea Boyle Tippett told The Washington Post in July 2019.

Tippett told the DCNF on Tuesday that the University of Delaware would not share the terms of the agreement between the university and Biden detailing why the Senate records may not be released.

“The gift agreement signed when the papers were donated is not a public document,” Tippett told the DCNF.

The collection of these documents fills 1,875 boxes and includes 415 gigabytes of electronic records, containing committee reports, drafts of legislation and correspondence, according to the Post.

Reade called on the former vice president to release these Senate documents in an exclusive interview with the DCNF Tuesday.

“Joe Biden, I want you to release all the personnel records from 1973 to 2009 and be transparent about your office practices,” Reade told the DCNF. “I would like to hold you accountable for what happened to me, to how your staff protected you and enabled you, bullied me multiple times into silence.”