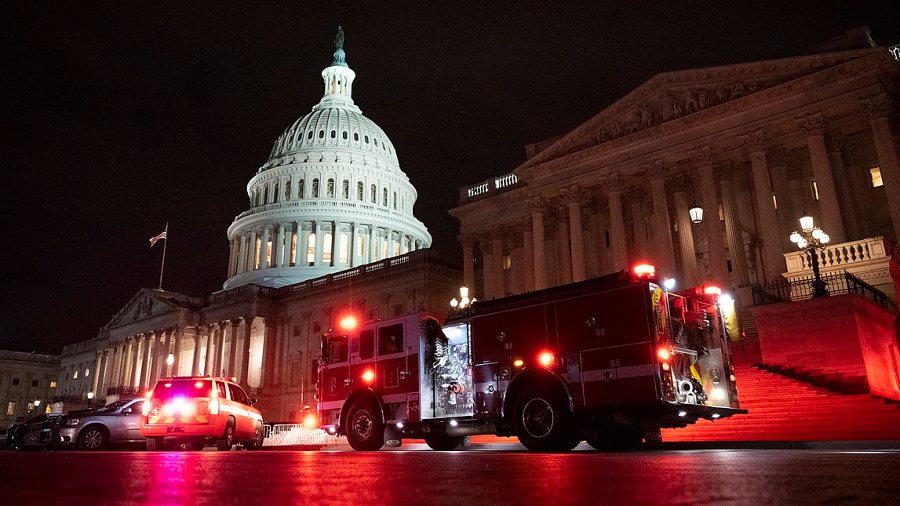 Most police departments — including Washington, DC’s Metropolitan Police — are required to release an officer’s name within days of a fatal shooting. Not the US Capitol Police, which is controlled by Congress and answers only to Congress. It can keep the public in the dark about the identity and investigation of an officer involved in a shooting indefinitely.

Which is what happened with the Jan. 6 shooting of Ashli Babbitt, an unarmed protester in the US Capitol riot who was fatally wounded by a plainclothes police lieutenant as she attempted to breach a set of doors inside the building.

For the past six months, as Congress has proposed legislation to reform police departments across the country, the Capitol Police has stiff-armed government watchdogs, journalists and even lawyers for Babbitt, who have sought the identity of the officer and additional details about the shooting. The USCP still refuses to release his name, in stark contrast to recent high-profile police shootings around the nation.

The Babbitt family is frustrated USCP won’t release any information about the incident other than the terse and vaguely written statement it issued on Jan. 7.

In February, USCP issued a press release promising to “share additional information once the investigation is complete.” But Justice Department investigators closed their probe in April, clearing the officer of criminal wrongdoing in Babbitt’s death, which the medical examiner ruled a homicide. And last month, the DC Police — which shares jurisdiction with the Capitol Police and has led the investigation into Babbitt’s shooting — concluded its own internal review of the shooting without making any findings, according to spokeswoman Kristen Metzger. Still, USCP continues “stonewalling the public,” according to the head of the police union.

“That’s my department’s attorneys for you,” United States Capitol Police Labor Committee Chairman Gus Papathanasiou told RealClearInvestigations. “There is definitely a transparency issue. The department needs to answer those questions. They are stonewalling the public.”

Withholding the name of the officer who fired the fatal shot — the only round fired by anyone during the four-hour siege — has bred speculation on the Internet and led to the mistaken identification of at least one officer. USCP Special Agent David Bailey was wrongly fingered as the shooter on social media and conservative news sites.

After RCI called attention to the false rumor in an email to USCP, followed by a story on the issue, USCP’s communications chief officially knocked it down as “misinformation.”

Now a new name has surfaced in the Babbitt imbroglio — Lt. Michael L. Byrd — and while USCP Communications Director Eva Malecki won’t confirm he is the shooter, in this case she isn’t denying it.

In a little-noticed exchange, Byrd was cited by the acting House sergeant at arms during a brief discussion of the officer who shot Babbitt at a Feb. 25 House hearing. Both C-SPAN and CNN removed his name from transcripts, but CQ Transcripts — which, according to its website, provides “the complete word from Capitol Hill; exactly as it was spoken” — recorded the Capitol official, Timothy Blodgett, referring to the cop as “Officer Byrd.” His name is clearly audible in the videotape of the hearing (see video embed further below).

Byrd appears to match the description of the shooter, who video footage shows is an African American dressed that day in a business suit. Jewelry, including a beaded bracelet and lapel pin, also match up with photos of Byrd.

In addition, Byrd’s resume lines up with what is known about the experience and position of the officer involved in the shooting — a veteran USCP officer who holds the rank of lieutenant and is the commander of the House Chamber Section of the Capitol Police.

Following the shooting, Byrd’s Internet footprint was scrubbed, including his social media and personal photos.

Phone calls and emails to Byrd, who lives in Maryland where he remains on paid administrative leave, went unanswered. His attorney would neither confirm nor deny that the 53-year-old Byrd is the shooter, and warned that disclosing his name poses a safety risk to the officer.

The Babbitt family is frustrated USCP won’t release any information about the incident other than the terse and vaguely written statement it issued on Jan. 7: “[A] sworn USCP employee discharged their service weapon, striking an adult female.”

Because Congress has exempted the USCP from Freedom of Information Act requests, the family is suing the DC Police “for documents that identify the officer who shot Babbitt … as well as notes and summaries of what the officer said regarding the shooting and the reasons he discharged his weapon.” (The DC Police has led the investigation into Babbitt’s shooting.) A hearing before a judge is scheduled for Sept. 3. Washington-based watchdog Judicial Watch also is suing for the records.

“They sit back and they completely refuse to release the name of their own police officer that was involved in a shooting of an unarmed woman,” said Ashli Babbitt’s husband, Aaron. “It’s ridiculous, it’s absolutely ridiculous.”

Legal Action Will be Taken

Babbitt has hired a Maryland lawyer specializing in police-abuse cases who plans to file a wrongful-death lawsuit against USCP and the officer, seeking at least $10 million in damages.

The attorney, Terry Roberts, said he has received no information from USCP about the case, even though he contacted the department’s general counsel in May. But he said an investigator in his office has positively identified the shooter from a “painstaking” analysis of photos and videos taken by journalists and witnesses inside the Capitol, as well as from tips from citizens and other information.

He said a key witness is Taylor Hansen, a freelance journalist who films protests around the country and was outside the Speaker’s Lobby with Babbitt, a 35-year-old Air Force veteran, when she was shot. Hansen claims to have identified Byrd as the officer who opened fired on Babbitt, striking her in the lower left shoulder.

“Hansen was present when Ashli was shot,” Roberts told RCI. “He has spoken with my investigator. He provided a reliable and accurate account of what he saw; he also made a video recording, which proved useful.”

Roberts said he is not ready to name the officer as a defendant in the lawsuit until he meets federal regulations for filing personal-injury claims against government agencies and employees, which could take several more weeks. However, he told RCI, “He’s a guy who left his service revolver in a bathroom.”

In February 2019, Lt. Byrd was investigated for leaving his department-issued Glock-22 firearm unattended in a restroom on the House side of the Capitol, even though the potent weapon, which fires .40-caliber rounds, has no manual safety to prevent unintended firing. Fortunately, the abandoned gun was discovered by another officer during a routine security sweep. A Glock-22 was used in the Babbitt shooting.

Byrd addressed the blunder at a roll call the following morning, reportedly telling fellow officers that he would “be treated differently” because of his rank as a lieutenant.

At the time, Malecki assured the press that “appropriate actions will be taken” against Byrd. Asked recently what disciplinary actions were administered, the USCP spokeswoman declined comment.

Double Standard on Transparency Thrust Into the National Spotlight

Unlike other police forces, USCP does not have to disclose records on police misconduct.

More than 700 complaints were lodged against Capitol Police officers between 2017 and 2019, but brass won’t say what the alleged violations were or how the department resolved them. They also won’t disclose how many complaints are in any individual officer’s file.

While the USCP has an inspector general, he does not make reports public, unlike other agency watchdogs. His report on Jan. 6 remains secret.

Critics say the 193-year-old agency is in dire need of reform. They point out that even the Secret Service complies with FOIA requests and releases reports and audits by its internal watchdog. The Capitol Police, in contrast, won’t even reveal how many sworn officers it has on hand.

“Unlike the [DC Police] and the vast majority of local police forces, the USCP provides little public information about its activities,” complained Daniel Schuman, policy director of the DC watchdog group Demand Progress, in a recent letter to the heads of the congressional panels who have oversight authority over USCP.

DC law requires police to identify the officer involved in a police shooting within five business days after an officer-involved death or serious use of force. Officials must publicly release the names and body-camera recordings of all officers involved in the death or use of force. The law does not cover the Capitol Police, however, even though DC Police work in conjunction with that agency on homicide cases and fatal traffic accidents.

The Babbitt shooting has thrust this double standard into the national spotlight.

A Determined Effort to Cover Up

Some lawmakers on the USCP oversight committees are clamoring for changes, starting with the immediate release of the name of the officer who shot Babbitt. They allege that Capitol Police are protecting an officer who killed an unarmed citizen from public scrutiny.

“In many instances, when a law enforcement officer kills an individual for any reason, that officer’s name is publicly released. But not in the case of Ashli Babbitt,” said GOP Rep. Paul Gosar, who sits on the House Oversight Committee. “Instead, there is a determined effort to cover up the full circumstances of this homicide.”

Mark Schamel, the Washington attorney defending the officer, warned that revealing his client’s name could put his life in jeopardy. He said the officer has received “credible” death threats and has gone into hiding. He would not provide further details about the type of threats or whether they have been reported to the FBI. Schamel also declined to say if authorities have provided the officer a protective security detail.

Asked about any threats made against Byrd, USCP General Counsel Tad DiBiase told RCI in an email that “one of our officers has received death threats, threats to his family, and numerous vile, racist sentiments directed at the officer.” Without elaborating, he said “these threats are currently under active investigation by the USCP and the FBI.”

The only publicly known threat made against the officer who shot Babbitt came from Garret Miller, who was arrested in Texas in part because of threats he made two weeks after participating in the Capitol riot. However, Miller circulated the wrong photos of the officer on Facebook, falsely identifying Officer Bailey, who is also African American. Miller remains in federal custody.

The FBI and USCP declined to answer when asked if any threats have been directed against Lt. Byrd specifically.