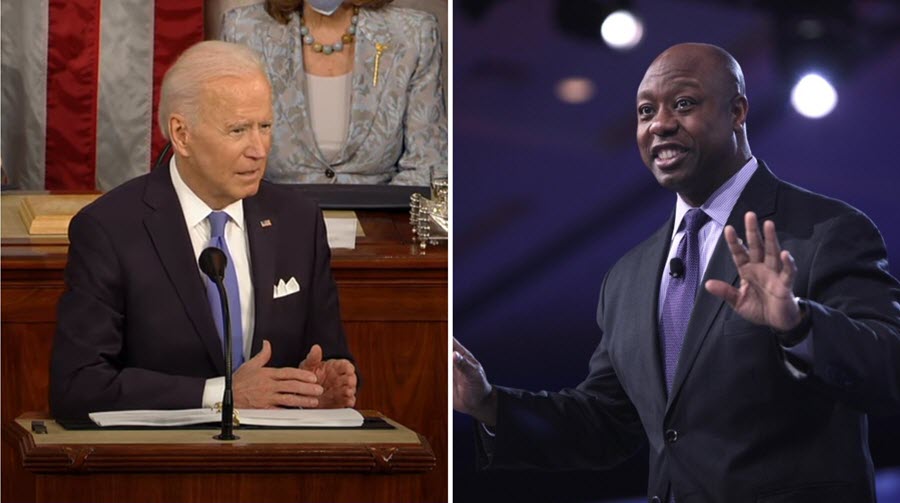 Last night, President Biden finally made his first joint address to Congress, a Bizarro World variation on a State of the Union Address in which only a tiny group of 100% fully-vaccinated people showed up, all wearing masks and social distancing, despite being in a massive room with a two-story ceiling. It was like sending a message to the entire world that our own leaders don’t believe the vaccines work. But I digress.

Here are all the key moments in 10 minutes (it would’ve been nice if his speechwriters had tried this).

And if you don’t want to sit through the whole thing but want to know precisely what was said, here’s a full transcript you can speed-read.

And here are Fox News’ “Top Five Moments” from the speech.

Note the “Bonus Highlight” moment, when you could actually hear someone’s cell phone go off in the nearly empty chamber during Biden’s speech. It would’ve been even funnier if the phone had a cricket chirp ringtone. Or snoring.

To Sum It All Up

Biden spoke for over an hour, but if I had to sum it all up in a nutshell, it would be with the familiar conservative adage, “The government that’s big enough to give you everything you need and want is big enough to take away everything you have.” Because that was basically what his plans amount to.

In more detail, it was everything you would have expected, at excruciating length. A lot of boasting about the success of the vaccination program, with no credit given to Trump for helping create the vaccines in record time through Operation Warp Speed and already administering 100,000 shots a day (including Biden’s) by the time Biden took office. A lot of talk about working together and listening to the other side while demonizing the other side and proposing bills he knows we adamantly oppose. Claiming that by raising taxes and the minimum wage, shutting down domestic oil and gas production and targeting the gig economy for destruction (that’s the “PRO Act” he touted, the national version of the disastrous California AB 5 law) — all things proven to destroy jobs — we’re going to create millions of new jobs.

He even said, “For me, when I think about climate change, I think jobs.” He mentioned all the jobs retrofitting buildings to be greener, and installing 500,000 charging stations for electric cars. And where will all the electricity come from? Why, sources like wind turbines, of course. He said he sees no reason why they can’t be built here instead of China. Except they require heavy metals that now only come from China.

And who will pay for all these jobs? The government, of course! If this speech had a theme song, it would be, I’ve Been Workin’ For the Government, All the Livelong Day. (Another good choice might be, Don’t Know Much About History.

Conservatives noted that in just three months in office … Biden has endorsed about $6 trillion in new deficit spending.

And it will all be paid for with money only taken from the super-rich and big corporations. If you’re not one of those, you’ll enjoy endless free stuff with no downside at all, and a bill would never come due. If you believe that, I assume you also dream of living in Fantasyland at Disney World.

Biden’s Mask Was Finally Off

Truly, Biden’s mask was finally off, in more ways than one. We’ve heard all this before; it’s the Obama years on steroids: destroying existing jobs on a promise to replace them with government-created “green” union jobs that never appear, largely because the same liberals making these promises have made it impossible to get permits to start any major construction of anything. It’s why Obama himself admitted that there were no “shovel-ready jobs.” Too bad, I could’ve used a shovel during this speech.

Ironically, you could only do this if you slashed regulations like Trump did, and that’s one of the first things Biden reversed by executive order, along with destroying union jobs by killing the Keystone XL Pipeline. He also wants a government program to lower prescription drug prices, and never mind that he inexplicably reversed a Trump executive order that did just that.

The biggest news out of the speech was his promoting of even more massive spending in bills which, as always, come with “Who can oppose this?” names to hide the actual contents, such as “The American Rescue Plan” or “The American Families Plan.” I’m sure there are some good things in them, like expanded child tax credits. But the names are also cover for a raft of government-expanding, freedom-crushing, budget-bloating programs. Some analysts pointed out that Biden didn’t include means-testing on some, like free community college, so even kids of millionaires could qualify. If Republicans proposed this, Democrats would call it a “giveaway to the rich.”

Conservatives noted that in just three months in office, between the COVID-19 bill that was mostly not directly related to COVID-19, the “Infrastructure” bill that spends only a fraction of its cost on actual infrastructure, and now this new $1.8 trillion proposal, Biden has endorsed about $6 trillion in new deficit spending, or about half-again as much as the entire annual federal budget. I hope the Green-New-Deal-Under-Another-Name that he’s proposing includes funding for planting a billion money trees, because we’re going to need them.

The GOP response to Biden’s speech was given by Sen. Tim Scott, and it was terrific. It was filled with inspiring personal stories, ideas for finding common ground, and much-needed common sense. I urge you to watch it all. It’s less than 15 minutes but says more than Biden did in over 60 minutes. My favorite line was his description of how partisan the Democrats’ “infrastructure” bill is: “They won’t even build bridges to build bridges!”

He also reminded viewers that when he proposed a bipartisan police reform bill that Democrats said they wanted, they used the Senate filibuster (that they now call “racist” and want to eliminate) to block it from a vote. As Scott said, they preferred to keep the problem as a political tool than to solve it.

You can tell how effective Sen. Scott’s speech was because the left was panicked enough to resort to their standard fallback: hurling racist slurs at a black man for daring not to think the way they tell him to. Ironic, since Scott even mentioned the racist attacks made on him by so-called “progressives.” Meanwhile, Twitter, which will censor any conservative for any reason, allowed a racist leftist hashtag to trend.

What? Schiff Gets Phone Records From Giuliani, Nunes, Journalist and Others