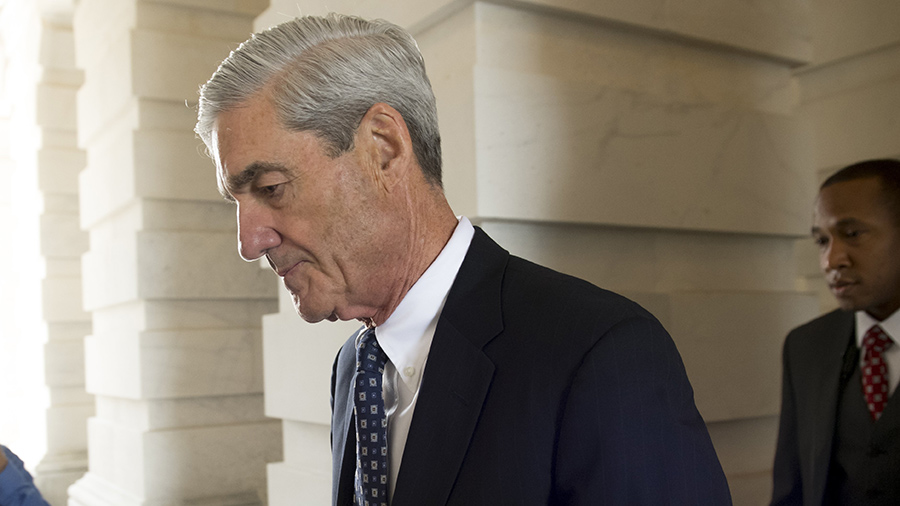 After a long and exhaustive investigation, Robert Mueller issued a report that found no conspiracy between Donald Trump’s campaign and Russia. None Whatsoever. However, the report offers much detail that it claims supports the conclusion that not only did the Kremlin interfere in our elections in 2016, but it did so specifically to elect Donald Trump.

Indeed, from the very day Trump stunned the world by winning the presidency, his adversaries have assumed that Russia’s goal was to secure his victory. Why, their “meddling” on his behalf was the main reason Hillary lost! Just ask her and she’ll tell you.

Aaron Mate begs to differ. His razor-sharp analysis of the Mueller report that appeared July 5 in RealClearInvestigations chips away at that conclusion.

After examining the report, Mate finds that these conclusions are not supported by the evidence cited in the report or publicly available elsewhere. He also cites shortcomings in the investigation and conflicts of interest among the key players (especially John Brennan) that undercut Mueller’s findings. That doesn’t prove his conclusions are wrong — just that there is not sufficient evidence to support them. Yet Mueller came to those conclusions anyway.

Let’s look at Mueller’s assertion that Russia’s main intelligence agency, the GRU, hacked into Clinton campaign chairman John Podesta’s emails and then used stolen Democratic National Committee credentials to hack into the DNC and the Democratic Congressional Campaign Committee (DCCC) servers in April of 2016. Mueller goes on to say that the GRU created two online personalities, “DC Leaks” and “Guccifer 2.0,” to begin releasing the stolen material. The report describes in detail just how this would have been accomplished, with Guccifer 2.0 supposedly transferring the DNC emails to WikiLeaks, which as we know released them just ahead of the Democratic National Convention.

But Mate finds that there are crucial gaps in the evidence supporting this scenario. Mueller must have been aware of such gaps, as he used a weasel word to describe what purportedly happened: GRU officers “appear [emphasis mine] to have stolen thousands of emails and attachments…” Not that they stole them, but that they appear to have stolen them. Huh??

Mate quotes former FBI Special Agent Coleen Rowley as saying, “It’s certainly curious as to why this discrepancy exists between the language of Mueller’s indictment and the extra wiggle room inserted into his report a year later.” Sounds as though Mueller isn’t really quite sure.

How’d the Info Get to WikiLeaks?

Mueller’s team also couldn’t confirm how the stolen Democratic material got transferred to WikiLeaks. A careful reading of the report turns up this sentence: “The Office cannot rule out that stolen documents were transferred to WikiLeaks through intermediaries who visited during the summer of 2016.” Sorry, that’s a huge hole in the evidence. The most Mueller can say is that the GRU, through Guccifer 2.0, may have somehow transferred the emails to WikiLeaks. Even then, he can’t even say with certainty that it was the GRU that hacked the DNC — only that it appears so.

There’s a problem with Mueller’s timeline as well. If it’s correct, Julian Assange would have to be a mind-reader, as he announced publication of the emails two days before the supposed source had even communicated with him. If another Russian source had already contacted Assange, Mueller provides no evidence of this. So it doesn’t make sense.

Also, Assange publicly announced he had the stolen material a full month before Mueller suggests Guccifer 2.0 sent it to him.

Of course, Assange has always denied the Russian government is his source for the DNC material and says the U.S. government does not know who it was. Recall that he said in January of 2017, “The U.S. intelligence community is not aware of when WikiLeaks obtained its material or when the sequencing of our material was done or how we obtained our material directly. WikiLeaks sources in relation to the Podesta emails and the DNC leak are not members of any government.”

Assange has made it clear that he will never give up a source, but as far as we can tell he also has never lied about who they are.

Another Reason to Doubt Guccifer 2.0 was WikiLeak Source

Mate finds additional reason to doubt that Guccifer 2.0 was WikiLeaks’ source. He cites a report in the New Yorker by Raffi Khatchadourian that says the documents released directly by Guccifer 2.0 were “nowhere near the quality” of the material published by WikiLeaks, and they also contained “easily discoverable Russian metadata.” There’s no evidence that WikiLeaks released anything Guccifer 2.0 provided. As Assange said in 2017, he “didn’t publish” any material from them because much of it had been published elsewhere and also because they “didn’t have the sources to independently verify.”

Mate cites a 2018 report from our friend John Solomon at The Hill that said Assange had told the Justice Department in 2017 that he “was willing to discuss technical evidence ruling out certain parties” in the leaking of DNC emails to Wikileaks. He had denied Russia’s involvement, so presumably he meant he wanted to discuss evidence ruling them out. But, incredibly, the interview never happened; according to Solomon, then-FBI Director James Comey personally intervened.

And thanks to Comey, the FBI never even got direct access to the DNC servers, relying instead on a forensic report from CrowdStrike, a cybersecurity firm hired by the DNC. Mate finds numerous problems with this. Perhaps the most obvious is that CrowdStrike was hired by … drum roll, please … Perkins Coie, the law firm hired by Hillary and the DNC to engage Fusion GPS in the creation of the Steele “dossier”! It’s unbelievable that Comey did not insist on maintaining a proper chain of custody for the evidence (the servers) and having the FBI conduct its own examination. CrowdStrike and lawyers for the DNC were even allowed to submit redacted records. What a farce.

There’s much more at the link. I urge you to take the time, as this article is a must-read for anyone who wants the truth about the Mueller investigation. Yes, it’s long, but remember that Aaron Mate has saved us from having to comb through the 448-page report to find its significant discrepancies and problems. (Democrats reading it aloud on the House floor apparently didn’t pick up on any of these, but then, I don’t think reading comprehension is one of their strong points.)

In the end, no matter what “official” conclusions Mueller reached after almost two years, there are problems with the evidence that still leave us at a loss to say with certainty who hacked (or leaked?) the DNC and DCCC emails, who gave them to Julian Assange, and what the motivation was. Assange could have cleared that up, if Mueller had wanted his testimony.