Mueller and Nadler Both Walking Disasters 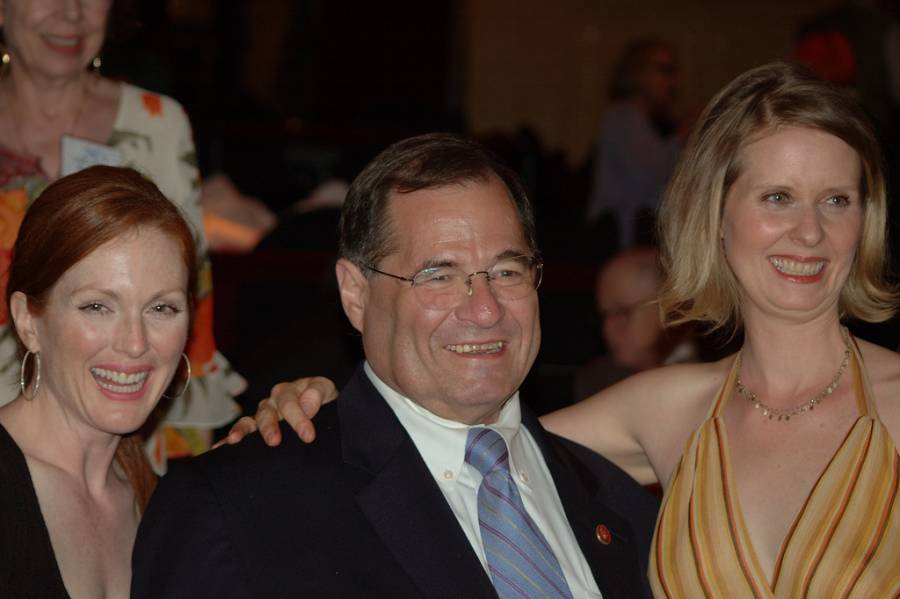 It was great fun going on Justice with Judge Jeanine (as in Pirro) this weekend to talk with her and fellow guest Dan Bongino about last week’s twin disasters: 1) Mueller’s disconnected testimony, and 2) Jerrold Nadler’s surreal press conference afterwards.

As for the Mueller hearings that took place on Wednesday, I had to say that if the Democrats thought they were going to “put a movie to the book” that was the special counsel report, that movie turned out to be Weekend at Bernie’s. We could all laugh because we’d seen for ourselves that there was very little brain activity on Mueller’s part —just enough to make sure that any questions about the Steele dossier and the FBI’s activities were not answered. Staying away from what was NOT supposed to be answered seemed to be Mueller’s most important consideration.

As lost as he appeared at times, Mueller was consistent in one thing: he just would not “go there.” In fact, he simply refused to answer nearly two hundred questions. I didn’t even know a witness could do that — pick and choose the questions to answer and not to answer. You’re supposed to either answer every question or take the Fifth Amendment on everything. Say, who’s obstructing justice around here?

As for Nadler’s press conference, attended as well by a gaggle of other grim-looking Democrats on the House Judiciary Committee, it’s hard to know if he watched the same Mueller testimony as the rest of us. If he did, then either he needs to be put in a padded room with no sharp objects or he was deliberately lying to us all. (Maybe at this point, it’s both.) “He [Mueller] told us Donald Trump obstructed justice and abused his office by tampering with witnesses, attempted to block investigation, and attempted to fire the special counsel,” Nadler said. Um, none of that is true.

Nadler and the other Democrat members of Congress participating in this farce have a greater imagination than my grandkids, and they have a pretty vivid imagination, let me tell you!

And where did the concept of “innocent until proven guilty” go? No one has shown that Trump did anything. In fact, he has been able to prove he didn’t do things he’s been accused of — a task that no American is obligated to perform and that is often impossible for an innocent person to do. He’s been incredibly transparent, even allowing his family members and his own attorney to be grilled for many hours. He also let the investigation proceed unimpeded when there were aspects of it that he had complete authority as President to shut down.

Doesn’t matter. Nadler & friends appear to have been on the planet Jupiter while Mueller was testifying. What Nadler is saying now about continuing the investigation is complete nonsense. Yet Democrats on the Judiciary Committee are going pedal-to-the-metal on impeachment. They are out of their minds.

Mueller and Steele Were “Fronts”

Bongino agreed that what the Democrats said about Trump during that press conference was “just delusional.” Thanks to Dan for bringing up the fact that it was Hillary Clinton who actually destroyed evidence (on a massive scale, I would add), obstructed justice and showed the general dishonesty and lack of character they’re trying desperately to pin on Donald Trump.

Dan made a really interesting point: Steele and Mueller were BOTH “fronts” for their reports. Obviously, someone else (probably Andrew Weissmann assisted by a few on his team) wrote the Mueller report. Dan has information suggesting that the Steele “dossier” was largely written by someone else and sourced from third-hand gossip.

Judge Jeanine tried not to come down too hard on Mueller, as he obviously is “very limited,” she said. Her problem is with the people around him, the members of his team. They made him “nothing more than a front for the Deep State.” As Mueller couldn’t even identify who Glenn Simpson was, or Fusion GPS (the oppo research company that hired Christopher Steele), that clearly is true.

So, why hasn’t the FISA court done anything to address the way it was misused? Well, first of all, we don’t know what’s going on behind the scenes. It’s likely Attorney General Barr and others at Justice are already quietly working with them to determine what happened with those warrant applications during 2016 and 2017.

Mueller obviously looked the other way. Now he dismisses any questions about the FBI and the FISA court by saying, “That’s not in my purview.” Since when? Mueller was tasked with investigating Russian interference in our electoral process and “related matters.” We see now that if it didn’t relate to Trump and the Trump campaign, it was not related. In fact, it didn’t even count.

Since Rod Rosenstein ostensibly “oversaw” the Mueller investigation and wrote the original memo outlining its scope, let’s hope AG Barr is all over that. How is it even possible to investigate a Trump/Russia conspiracy without looking at what the FBI did and where they got the information that sparked their probe in the first place? For all anybody knows, it could have come from the National Enquirer. As I told Judge Jeanine, my pal Larry Gatlin would call it “bovine droppings.”

You know, it’s ironic that Mueller criticized Trump’s written answers to the special counsel for being “incomplete.” If Trump were tasked with filling in those blanks today, after hearing the laughably incomplete testimony given by Mueller, he’d surely be tempted just to write, “Not in my purview…not in my purview…” in answer to every one.

If you like what Judge Jeanine — and her excellent guests — had to say about the Mueller hearings, you’ll love Kyle Smith’s latest column in the New York Post. (Nadler is his congressman, and Smith has long known how he operates.) Smith gives us our Quote of the Day: “Mueller spent two years nosing around, more time than it took to build Disneyland, but all he built for the Dems was a Tragic Kingdom.”