Mozambique Hit by a Second Cyclone: Local Shares How His Community is Coping 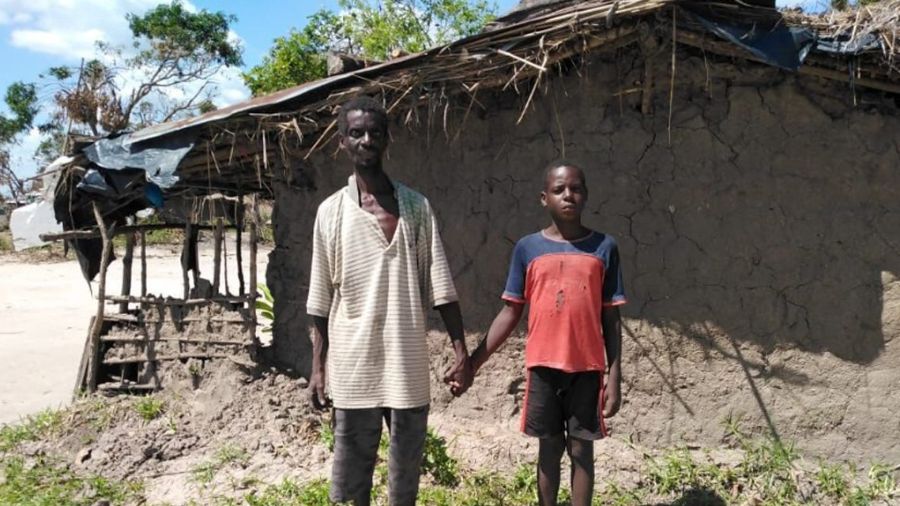 Two Mozambique men stand hand-in-hand outside a mud hut in the wake of Cyclone Idai.

Initial reports said there were three confirmed dead in Kenneth’s wake, and concerns have arisen about further death and destruction in the next 10 days as floodwaters are expected to rise with heavy rains.

Noting the rarity of this occurrence, the United Nations said that never before in recorded history have two cyclones made landfall in Southern Africa within one season.

Cyclone Kenneth hit Ibo island and the city of Pemba, about 847 miles north of Beira, where Cyclone Idai took the lives of more than 600 Mozambicans six weeks earlier.

The total damage from Cyclone Kenneth isn’t yet fully known, but there are reports that 90 percent of the homes on Ibo island have been destroyed. The path of the cyclone was less populated than that of Cyclone Idai, but the loss of life and property is substantial.

The Daily Signal had the opportunity to speak with one Mozambican about how his home city of Beira is recovering from Cyclone Idai. Oliveira Mocuna and his wife and children have lived close to the coast in the city of Beira, the country’s fourth-largest city, for nine years. When the cyclone struck on March 14, the city wasn’t prepared.

Cyclone Idai, a Category 3 storm, produced winds as high as 120 mph. Mozambique suffered the most catastrophic damage from Idai, but Malawi, Madagascar, and Zimbabwe also suffered many deaths and tremendous damage due to flooding and high winds.

It’s estimated that Idai caused $1 billion in infrastructure damage in Africa and took the lives more than 1,000 people. In the wake of Kenneth, that number is likely to climb significantly.

“Many people are struggling,” Mocuna told The Daily Signal in a phone interview. “People were suffering even before [Idai], and the cyclone came and destroyed everything. Now, people have no hope.”

Mocuna and his family serve with a faith-based nonprofit organization, Youth With A Mission, in Beira, ministering to youths and local church leaders. In nearly a decade of service, the group has never encountered a challenge quite as massive as the one it now faces in the aftermath of Idai.

Beira, located directly on the Mozambican coast, is home to more than 530,000 people. When asked why more people didn’t evacuate inland before the storm hit, Mocuna explained that many of the locals didn’t believe the warnings they were hearing on the radio because they don’t trust the news media.

“Two or three days before, they were saying on the radio to store up food and water, because it was going to be very bad, but people did not believe these warning,” Mocuna said. “Many African people do not trust the media.”

Mocuna said that people were going about their day as usual on March 14. “Around noon, it started to rain, and people said, ‘Oh, we will see.’ It was not until 3 p.m., when the rain and wind really began to pick up, that people began to take shelter,” he recalled.

Mocuna remembers that every hour, the storm grew stronger, and he describes the hours of 11 p.m. to 3 a.m. as “total noise.”

“All night, we did not want to sleep because the wind broke the windows of my house, and water was coming in. The wind was coming from every direction, and we worried that the house was going to fall down.”

The wind and rain subsided at 5 a.m., and Mocuna ventured onto his veranda to see his city under water and strewn with debris.

A number of humanitarian aid organizations have been on the ground supplying food, water, and medical aid since.

The U.S. Agency for International Development sent $200,000 worth of support to Mozambique directly following Cyclone Idai. Samaritan’s Purse — a North Carolina-based Christian nonprofit run by Franklin Graham, the son of the late Christian evangelist Billy Graham — sent a team of disaster relief specialists and 27 tons of supplies to Mozambique days after the storm. The Red Cross gave $450,000 to support relief efforts in the wake of the cyclone.

Concerns have been raised that some foreign aid might not be reaching the people it is intended to help and who need it most.

Joshua Meservey, The Heritage Foundation’s senior policy analyst for Africa and the Middle East, said in an email that there are “credible reports that some of the international aid being rushed to the affected areas is being diverted by government officials.”

The greatest concern now is for controlling sickness; specifically, the cholera outbreak. World Vision has reported more than 1,400 known cholera cases in Mozambique alone, showing that the need for aid is far from over.

As the people of Mozambique look to rebuild their lives and communities, there are several other concerns that extend beyond the immediate need for food, water, and medical help.

Mocuna said that “all the school materials were destroyed.” Children can’t go back to school because the schools are in need of repair, but even if they had a place for the children to meet, they don’t have books.

There’s also an urgent need to clean up the city and remove the rubble to stop the spread of disease to enable people to begin to rebuild their homes and businesses. Mocuna said he made an appointment to talk with the mayor of Beira about that.

Mocuna’s home and family survived Idai, but many others weren’t so fortunate. “People lost everything, and they are trying now to rebuild their homes and to find food. There is a lot of need. We need people to come and help us rebuild,” he said.

Can You Help? Deadliest Storm in 30 Years Devastates Mozambique