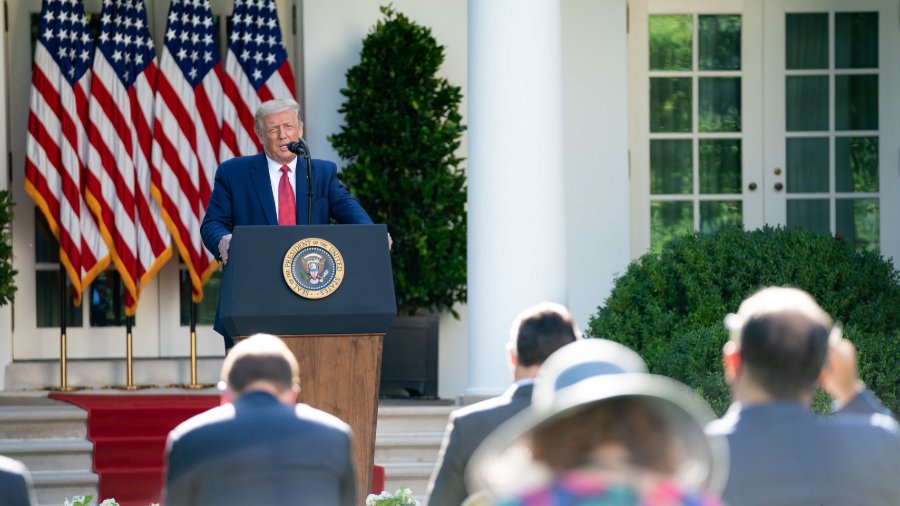 President Donald Trump held a press conference July 14, 2020, in the Rose Garden of the White House.

Commentators came out of the woodwork to ridicule President Donald Trump for allegedly turning his July 14 press conference into a campaign rally (and for being unpresidential). So what if he did?

They objected that he veered into other topics when he was supposed to be talking about China and Hong Kong. Horrors!

The press corps, of all people, has no standing to complain about topic drift at presidential press conferences when it routinely uses such events to ask questions unrelated to the announced topic.

Presidents always frame their policy positions in the most favorable political light, especially this close to an election. Don’t even think about saying Trump is unique on this. Of course Trump is going to argue that his actions warrant his reelection, and it’s absurd to claim that’s unusually political, as if it’s possible to separate policy from politics.

But the liberal media’s hypocrisy is hardly noteworthy anymore. We’d be fools to expect fairness from them.

What is notable, though, is that some establishment conservative strategists and analysts also joined in, lamenting that Trump shot himself in the foot by going off script and meandering all over the board. They essentially said, “He had an opportunity to be presidential on this weighty foreign policy issue, but he descended into campaign-rally mode and blew it.”

They cringe that Trump is unorthodox, unpolished and unafraid to get down in the dirt with his opponents, especially from the lofty, hallowed presidential podium. They also don’t get Trump supporters, who are not holding their noses to vote for him. They can’t wait.

These establishment handwringers have shown themselves ill-equipped to analyze Trump or his supporters because they can’t adapt their expertise and experience to Trump, who broke the mold and is unlike any political figure they’ve ever encountered. They are handicapped by their willful blindness to the unprecedented fascism of today’s political left.

Newsflash: The overwhelming majority of Trump supporters doesn’t give a rip about his so-called presidentiality. They don’t care about the proverbial crease in his pants, or many other characteristics the pseudo-sophisticated beltway elite cherish. They don’t want someone like Mitt Romney, who let Barack Obama walk all over him in a presidential debate instead of fighting for what he purported to believe in.

Trump supporters don’t want Trump to moderate his positions in the hopes that the committed radicals will morph into moderates and the crisis will pass. It won’t, because leftist agitators won’t let it. Trump supporters realize we’re in a war for the survival of the country — a war we didn’t start and one we’ll lose if we don’t fight back with every fiber of our being. We want him to counter the violent, revolutionary left at every turn.

Shame on us if we ignore or downplay the anarchy and violence in the streets; the destruction of monuments; the assault on and defunding of police; the sanitization of radical groups as humanitarian rather than Marxist organizations; the cultural terrorism against ideological diversity; and the deliberate fanning of racial discord.

Sadly, there’s no rational basis for clinging to the hope that the Neville Chamberlains of the right are going to wake up to the existential struggle we’re in and get on board. So, at the very least, we mustn’t let them discourage those who understand the struggle.

Purveyors of conventional political wisdom miss the reality on the ground. They fail to grasp how much Trump supporters appreciate that he counters the liberal media narrative, that he’s calling out the anti-Americanism of the Alexandria Ocasio-Cortez’s and the insane radicalism of their energy-and-economy-destroying green agenda.

Trump supporters don’t believe he’s inhumane for refusing to allow America to be paralyzed by fear, and for insisting that we reopen the economy and get our kids back to school. They deny that he’s racially insensitive because he believes we should protect our borders and shouldn’t kneel for the national anthem.

They reject the false choices foisted on them by a media dedicated to extinguishing the Trump presidency and fundamentally transforming America. They resent being called racist because they celebrate our founding and our Constitution. They will not be bullied into submission by those cynically using the race card as a Trojan horse for socialism and leftist authoritarianism.

Trump supporters understand that the failing Joe Biden, whether or not he’s a radical himself, will be putty in the hands of extremists and that, if Trump loses this election, their children’s chances of living in freedom drastically diminish.

They see what these radicals have done when their political party of choice is out of power, and they shudder at what they would do if in power.

So you “conservative” strategists longing for the surrender of our principles for the sake of Oxford eloquence and phony politeness in the midst of an all-but-hot civil war will just have to remain frustrated, because if you don’t understand what’s at stake by now, you never will. You just aren’t wired to get it.

We Trump supporters understand that we may lose the election and the country, but we won’t do it without fighting or because we fear being falsely depicted as bigots more than we fear losing the nation.

David Limbaugh is a writer, author and attorney. His latest book is Guilty by Reason of Insanity: Why the Democrats Must Not Win. Follow him on Twitter @davidlimbaugh and connect with him at davidlimbaugh.com.

The Left is on a Mission to Annihilate Conservatism

Is President Trump Pro-LGBT? Or Anti?