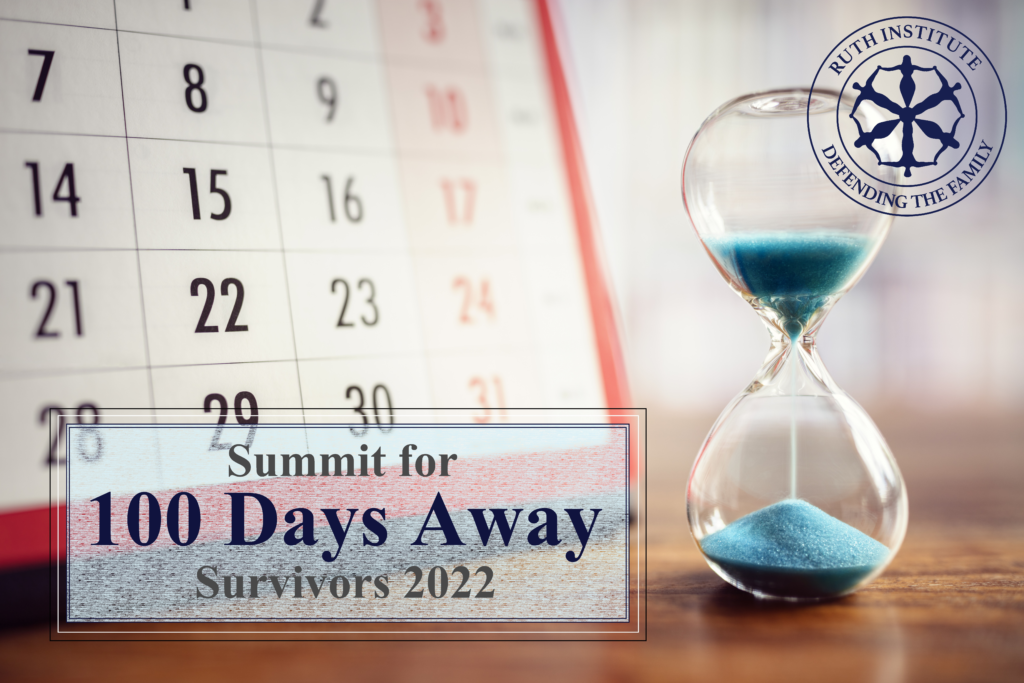 The Ruth Institute’s 5th Annual Summit for Survivors of the Sexual Revolution, June 24–25 in Lake Charles, Louisiana, will cover:

Jennifer Roback Morse, Ph.D., Founder and President of the Ruth Institute, said, “These topics reflect our ongoing commitment to defend life and the family, and to expose and counter the damage inflicted by the Sexual Revolution.”

More information on topics and speakers, as well as how to register, will be released soon. The Summit will be held at the West Cal Events Center in Lake Charles, LA.

“This promises to be our most exciting and informative Survivors Summit yet,” Morse said.

Walt Heyer underwent gender reassignment and lived for eight years as a “woman” before detransitioning. Even the doctors who transitioned him admitted in a court document that it is impossible to turn a man into a woman. So why is this still happening? Heyer asks.

Through his website, sexchangeregret.com, Heyer spends most of every day responding to pleas from transitioners asking for help transitioning back. They call themselves Frankenstein and say they hate their body, Heyer said. “People are being destroyed by this procedure.”

Hear Heyer’s painful story of child abuse, which led to his gender confusion, and gender transition later in life. “Surgery is an extension of more abuse,” he said.

“You can take all the hormones you want, have all the surgeries you want, but nothing changes … . Cutting off body parts and filling [people] with hormones is not how to resolve somebody’s struggle. We’re harming them. I keep wondering, when are we going to wake up?”

“The forces of the Sexual Revolution get more disingenuous by the day,” said Morse. “Now they’re trying to sanitize the language of the abortion debate to hide reality.”

The powerful American College of Obstetricians and Gynecologists (ACOG) released a “Guide to Language and Abortion” which claims: “Much of the language that is colloquially used to describe abortion or discuss health policies that impact abortion has a basis in anti-choice rhetoric and is inherently biased and inaccurate — and, at the very least, is not medically appropriate.”

Morse noted a few examples of tortured terminology. “Readers are told not to say ‘baby’ or ‘unborn child’ because they are ‘medically inaccurate’ terms, but instead to say ‘embryo’ for the first eight weeks after conception, and ‘fetus’ thereafter until the baby is delivered.”

“This is absurd,” Morse remarked. “This isn’t how people talk, including medical professionals. If a woman visits her OB/GYN, the physician doesn’t ask, ‘So, how’s the fetus doing?’”

“But partial birth abortion is an accurate description of a medical procedure that kills an unborn child, excuse me, a fetus,” Morse said. “The child is delivered partially alive before the skull is punctured and the brains sucked out. ‘Abortion-on-demand’ and ‘elective abortion’ are expressions frequently used by abortion advocates.”

Dr. Donna Harrison, MD, Chief Executive Officer of the American Association of Pro-life Obstetricians and Gynecologists said, “By trying to use terms which are as dehumanizing as possible of the preborn child, ACOG reveals that accurate medical information is not as important as repeating and entrenching abortion industry rhetoric.”

Morse commented, “Proponents of the Sexual Revolution, including the American College of Obstetricians and Gynecologists, are growing desperate. Opinion polls show public opinion shifting against them. Hence the absurd attempt to adopt language that cloaks reality.”

The Truth is Not Politically Correct

The latest Dr. J Show guest is Dr. Pat Fagan, Founder and Director of the Marriage and Religion Research Institute (MARRI) at the Family Research Council. He is also a professional therapist specializing in child, family and marital therapy.

In his practice as a child therapist, Dr. Fagan found that 95% of the time, the problems the child was having resolved when the problems the parents were having with each other were resolved. He explains the three main reactions children have to trouble between their parents. (None of them are good.) Hear his answer to the question of whether or not, when there’s conflict in the home, kids are better off if their parents get divorced.

The Marriage and Religion Research Institute has incontestable data proving that intact families have the best outcomes for both parents and children, but social scientists won’t talk about this because it isn’t “progressive.”

Dr. Fagan also explains why Black Lives Matter is an enemy of black children. BLM claims to seek equality by abolishing marriage, but black children suffer the most from the breakdown of the family.

Learn the results of a fascinating study of fathers holding their newborn babies skin to skin. “This is the single most valuable contribution of the social sciences to humankind yet … This will change humanity over time.”